TORONTO, Ont. — All the power in the world won’t get you anywhere if your transmission can’t manage it properly. Startability and gradeability are the two key factors in powertrain spec’ing, which means getting the power to the wheels safely — without wrecking the driveline — and having several ratios to keep the truck moving while climbing. In applications where the grades aren’t too severe, 10- and 12-speed transmissions can work even with the heaviest legal loads. When you start pulling 7, 8 and 9% grades with more than 62,500 kg in tow, you simply need more gears.

We can get by with fewer gears today thanks to the way engines have evolved, specifically when it comes to changes in their torque curves. Prior to 2000, most engines had distinct peaks to their torque curves, which limited peak torque to a pretty narrow range, sometimes less than 100 rpm. To allow the engine to operate at peak output, we needed lots of gears to keep the engine speed at or close to peak output. Gradually those curves flattened out and torque output increased so trucks could stay in certain gears longer. Today’s torque curves are more like plateaus — flat and broad, often extending through a range of 400 or 500 rpm and sitting way down low in the rpm range. Rather than downshifting through two or three gears when climbing a grade to stay at or close to peak torque, we now need only one or two gears.

In Canada, the preferred multi-speed transmission for heavy haulers seems to the Eaton 18 speed. But of you want a high-horsepower engine, you’ll need to go with either Detroit’s DD16 or the Cummins X15 performance variant. For those engines, you’ll need something from Eaton.

For years Pierre Aubin, owner of L’Express du Midi, Delson Transport, and Transport Audet of Ste-Catharine, Que., has been spec’ing Eaton 18-speeds behind his 600-hp Cummins engines. Between the three companies, he runs more than 100 B-trains and four-axle flatbeds with payloads of 41,000 and 38,000 kg, respectively. They’re all operating in northern Quebec and on that province’s notorious Cote du Nord, between Sainte-Anne-de-Beaupré and Sept-Isles.

“That’s no place for an under-spec’d truck, let me tell you,” Aubin says. “You need all the gears and the close ratios on those roads. They are nothing like American highways. When you get to the top of that first hill, you’re looking into the eyes of God.”

Most of his 18-speeds are manuals, by the way. He has a few UltraShift Plus automated 18’s and few automated transmissions in his straight-truck tanker fleet. “I do not see the value in spending an additional $8,000 for a less-reliable transmission,” he says. “Those automated transmissions are a pleasure to drive, I’ll admit that, but when they break down they leave you with no options but to call a tow truck.”

In contrast, many other Canadian B-train fleets claim they are doing just fine with automated manuals. Winnipeg-based Paul’s Hauling is primarily a fuel hauler using B-train tankers. The company operates throughout Ontario and the four western provinces as well as on the winter roads around Thompson in northern Manitoba and Pickle Lake in northern Ontario.

The company’s powertrain spec’ might seem surprising. The newer trucks in the fleet are all 13-litre engines at 1,850 lb-ft and 500 or 505 hp. The transmission spec’ includes Eaton UltraShift Plus and Mack mDrive, and the most recent delivery from Freightliner included the DT12 transmission.

“The latest bunch of Cascadias we ordered from Freightliner were equipped with the DT12,” says Trent Siemens, director of maintenance at Paul’s Hauling. “We had been testing a few for about a year and Freightliner was watching them closely. They have now approved the transmission for our application with the DD13 engine at 505/1,850.”

Daimler’s current brochure shows the maximum gross vehicle weight for the DT12 is 130,000 lb. (58,500 kg), so this application suggests it’s capable of even more with engineering approval.

“We do not tell the OEMs specifically what we want. They give us what they feel is best for the application given our weight and terrain and the rest of our operating conditions,” Siemens says.

The fleet also took recent delivery a few Peterbilts with Paccar MX13 engines at 510/1,850 and Eaton UltraShift automated 18-speeds. Later this year they will take delivery of some Mack Anthems with similarly spec’d MP8 engines and the new 13-speed mDrive HD transmissions.

While smaller-displacement engines and proprietary “on-highway” transmissions keep turning up in fairly demanding applications, don’t count on seeing many of them in really heavy haul applications like the fleets that haul overweight loads with specialized equipment. For that crowd, it’s Eaton’s RT-series 18-speed manual transmissions or the Ultrashift Plus MXP automated 18-speed — or even a two-stick 5×4 or 6×4 setup.

With 100-ton loads, the need for gears and tons of torque and horsepower are pretty obvious. While much of the on-road driving portion of those trips might be done with a lesser setup, it’s often the last few miles of a trip that dictate the spec’, says Rod Olyowsky, operations manager of Regina-based heavy-hauler Cara Dawn Transport.

“More than half or our revenue comes from loads weighing 100,000 lb. or more,” he says. “We haul all over North America, but the most challenging jobs see us hauling into mine sites in southeastern British Columbia. They usually aren’t located a few miles from a freeway off ramp. They are often at the top of a 10- or 20-mile long 9% grade.”

Cara Dawn runs mostly tri-drive tractors in the west with 600-hp/2,050 lb-ft engines mated to 18-speed transmissions, “We still have a few duplex 5×4 transmissions as well,” says Olyowsky. “Sometimes even those are barely enough.”

Many of the older drivers who work in that sector are leery of the automated manual transmissions, but the UltraShifts are making their way into the business.

Of course, a lot of drivers said that about 80,000-lb. GVW trucks when the Eaton’s AutoShift first emerged 20 years ago. It’s taken some time, but now many of those drivers won’t leave the yard with anything but an automated transmission. 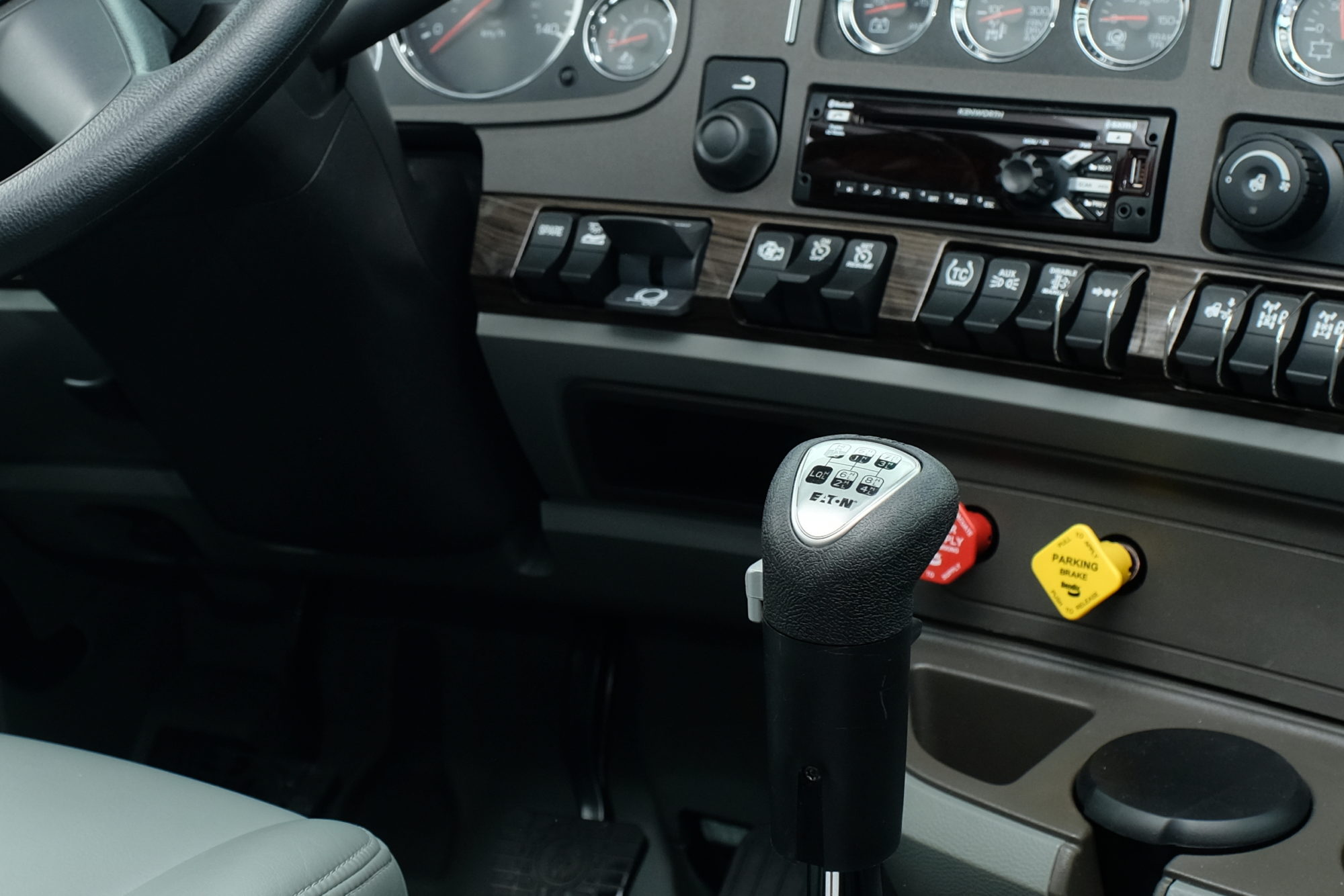 More options than ever

Canadian fleets that operate six-and seven-axle combinations now have transmission and engine choices they may not have considered in the past. Transmission choices for really heavy applications are still quite limited, but the mid-weight market between 47,000 and 57,000 kg is now opening up to the 12-speed offerings. Gross weight may be less of a factor than it previously was, but the terrain you operate on will still be the determining factor for your transmission spec’.

Along with the traditional 18-speed offerings from Eaton, we now see Volvo’s I-Shift and Mack’s mDrive HD providing additional ratios for heavy haul and severe service. These offer up to 14 forward gears with astonishingly low creeper ratios for specialty applications like pouring curbs and sidewalks by concrete mixers. They are also more than capable of handling some high-GVW on-highway applications if not 100,000-kg loads of mining equipment on the side of a mountain.

Transmissions don’t care which engine is producing the torque, so with ratings mostly exceeding 2,050 lb-ft, most of the 12-speed transmissions can now handle big power. Neither Volvo or Mack offer an engine producing more than 1,860 lb-ft, so there’s obviously some redundancy in those transmissions. Daimler’s DT12 is also rated for 2,050 lb-ft, and it’s allowed in applications up to 130,000 lb. (58,500 kg) with a dual-plate clutch and approval from engineering.

Here are a few choices worth considering.