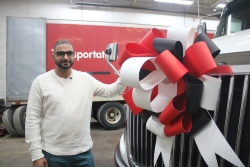 TORONTO, ON – The smoke pouring into the truck was thick and there were just moments to act when Ickroop Mangat, just 23-years-old, and his trainer Dave* were involved in a multi-vehicle collision during a sudden, zero-viability snowstorm outside Montreal last Winter.

The new driver for Kriska Transportation acted in a heartbeat, kicking in the driver’s side window and crawling out of the cab before helping his instructor out behind him. Panicked and on fire, the instructor ran from the truck, but Mangat tackled him to the ground, practicing the ‘stop, drop, and roll’ method to put out the flames and save the man’s life.

His actions on that day earned Mangat the Bridgestone-Ontario Trucking Association Truck Hero Award at their annual conference last week, but Mangat says he’s no hero.

“I was thinking ‘I don’t want to die in a truck, and Dave doesn’t either,'” he said. “Never leave a man behind.”

What for one man was a natural reaction, OTA president Stephen Laskowski, is calling extraordinary courage.

“His actions shine a light on all the professional drivers who put their own lives on the line to help those in need,” he said.

Although Mangat graduated from a mechanical engineering program, he says he is proud to drive for the company his father drives for.

Mangat spent childhood weekends in the shop with his dad and brother, helping to fix and wash the trucks. Now his dream is to be an owner-operator.

Mangat had plans to buy his own truck in another year, but Mark Seymour, president and CEO of Kriska, was happy to make that dream a reality much sooner for the young hero.

“He could be anything, but he just wants to drive a truck like his dad,” he said. “We need more people like Ickroop.”

Kriska gave Mangat a truck to call his own in a ceremony held at the company on Friday.

With work done by Tallman Truck Group, the 2013 International truck with a brand new Maxxforce D14 engine, was made shiny and new before the keys were handed over. 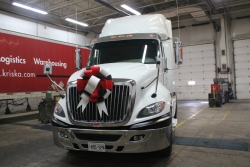 The 13-liter, 475 horsepower engine has just 40 miles on it, but that wasn’t the only upgrade the Kriska truck received. With a new coat of paint, upgrades to the interior, and an all-new chrome package, the truck only needed a big bow before it was ready for the company’s presentation.

Mangat says the truck is similar to what he drives with the company now, but without the chrome – now his favorite part.

Speechless when Seymour handed him the keys – the first time in the company’s history they’ve given a driver a truck –  Mangat said he couldn’t be more grateful, and plans to drive with Kriska for a long time.

“I’ve got my father here, and a good company behind me, what more could I want,” he said.

*The trainer Dave’s last name has been withheld at his request.