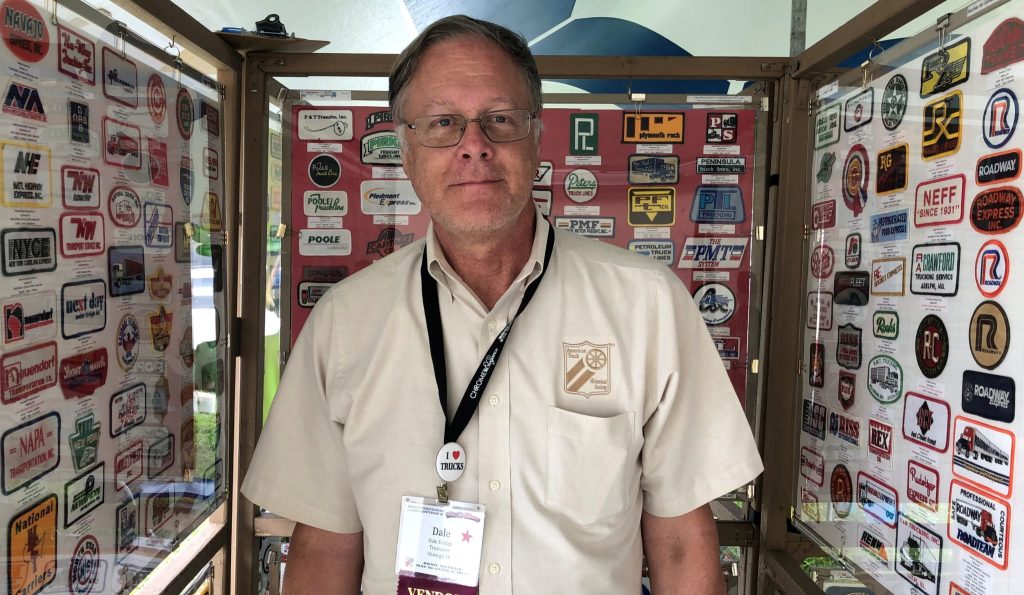 CLIFFORD, Ont. – Dale Bridge has been collecting trucking company logos for nearly 45 years, and for the first time, the American historian brought thousands of them to the Antique and Classic Truck Show in Clifford, Ont.

“And I have at least that many more I know I have to get.”

Bridge said his goal is to help preserve a portion of the trucking industry’s history. He said a number of events such as deregulation, fuel price surges, and economic slowdowns over the past several decades had impacted trucking companies in North America, resulting in the quick demise of some of them.

“For all of these events, I just felt a need to save some part of the ‘fallen flags’, and that is what the patches do”.

Indeed, nearly 70% of the companies in his patches portfolio are no longer in business.

Bridge began collecting the crests in the 1970s when he was working as a finance development program trainee at International Harvester in Fort Wayne, Ind. That is a company he was already familiar with as his father and grandfather were IH employees.

Over the years, IH has transitioned itself to Navistar International.

Bridge now has the largest collection of logos of U.S. and Canadian common carriers, companies that make money carrying other people’s stuff.

Most of the patches were bought over the internet or collected via trading, but some were donated to him by the carriers themselves, he said. 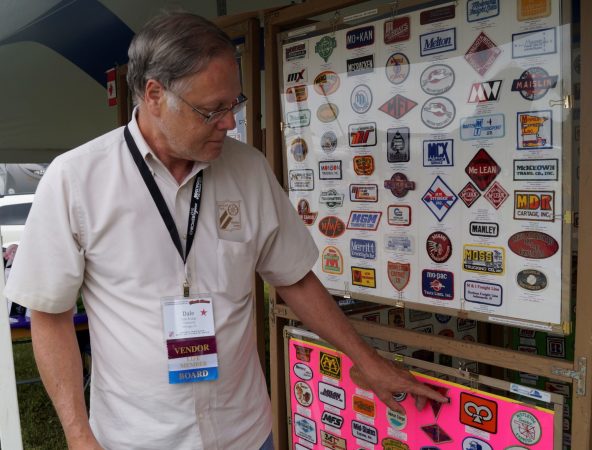 “This one here is probably my favorite,” Bridge said pointing to the logo of the now-defunct Mushroom

Transportation, which was based in Philadelphia, Pa. The red patch features a stylized M and T, forming the shape of the cargo the company carried.

The oldest patch in his collection is that of Associate Transport from the 1940s.

Bridge’s efforts to get the logo of a company called Conway Now, which existed for just under two years, has been unsuccessful.

“I know one exists. I’ve put out a bounty of $95, but no one has collected the bounty yet,” he said.

His collection is bequeathed to the American Truck Historical Society and to the IOWA 80 Trucking Museum.

At this year’s ATHS convention in Reno, Nev., Bridge was honored with the prestigious Historian of the Industry Award.

In its citation, the society praised his “tireless efforts” to further the goal of preserving the history of the trucking industry. Fewer than 25 people have received the award in its 50-year history.

Bridge has limited himself to collecting U.S. and Canadian crests. There is one collector in Connecticut who has 13,000 patches and one in Indiana with 11,000, but they collect international logos as well.

“I am the only one who travels with it. They just keep it at home,” Bridge said.