TORONTO, Ont. — Things have changed since Brian Screeton first began working on trucks. “It was easy to become an engine guy, or a brake guy, or a transmission guy,” recalls the Bendix supervisor of technical service training.

Those days appear to be coming to an end.

The ever-growing number of sensors and electrical systems mean vehicle components are more interconnected than ever before – adding a layer of complexity to troubleshooting efforts, and requiring a broader approach to diagnostic procedures.

“They’re all relying on each other to be in the functional state, or relying on the different sensors that the different systems have, and making sure all the information is available,” says Nick Broyles, engineering supervisor for driver assistance systems at Bendix.

Just one failing sensor can have a cascading effect. The same wheel speed sensor needed for a brake controller can trigger a fault in a driver assistance system mounted further up the vehicle, or trigger problems with engines and transmissions that rely on the sensor for a reference vehicle speed. Screeton has come across brake electronic control units and radar units logging fault codes after an engine was recalibrated during a regular service interval – interfering with the required signals in the process.

It all places an increasing emphasis on tackling electrical-related maintenance challenges by looking across an entire vehicle. And it leads Broyles to recommend looking beyond individual fault codes and pulling an ECU report from every electronic control unit on the vehicle.

Traditional approaches of relying on things like a specific component’s blink codes will also be less telling than updated diagnostic software that’s ready to interface with any ECU on the vehicle, Screeton adds.

“I really try to drive technicians to just get going to the software for whatever part they’re looking at,” he says.

Of course, some of the most frustrating moments emerge when chasing intermittent problems — the so-called ghosts in the machine. This is where a logical, methodical approach will make a difference. Gathering as much information as possible from a driver’s report, and combining that with the most recent service information, is a good place to start.

“Troubleshooting is just a process of elimination. You get down to the one thing you can’t eliminate and that is most likely your problem,” Screeton says. “You need to get to the point where you can turn an issue on and off.”

This all emphasizes the need to take care when mounting and remounting any related sensors, too.

“On a driver assistance system, the radar and camera need to have the proper field of view to be operational,” Broyles says as an example. Corrosion-related issues that emerge can often be traced to someone using the wrong seal or harness during a repair, ultimately breaking the all-important connections.

Other issues with problem connections on a vehicle can involve the same power source that trucks have relied on for years.

“A lot of what we see has to do with the connections to the batteries,” says Dale Henningson, chief research engineer with Purkeys Fleet Electric. “If those terminals aren’t clean and tight, we see issues there. At any place there’s a connector or a cable termination, it becomes a possible point for the connection becoming loose, or corroded, or dirty, which leads to corrosion.”

He recommends checking such connections every six months, or even every three months if that can be fit into a preventive maintenance regime. “If they’re dirty at all, clean them up good and make sure they’re secure and tight.”

Battery terminal sprays and dielectric grease can help to tackle troublesome corrosion, and most OEMs already apply plenty of grease on the terminals and connections before new trucks roll off an assembly line. Sure, it’s messy, but it works.

Probably the most obvious type of broken electrical connection will come in the form of failed lighting.

“With lighting you’ve always got to stick to the basics. You’ve got to have a good ground and power and current going through the bulb,” says Jeff Burdzinski, product application manager with Philips Lighting.

The solutions to recurring problems often come when replacement parts are stocked, because not all bulbs are created equally.

The sources of such components usually seem questionable from the outset. Burdzinski refers to websites that have become dumping grounds for everything from counterfeit lighting to designer purses. Some of the bulbs even come marked with fake DOT compliance stamps and brand names, he says. But to create a brighter bulb the counterfeiter might up the wattage over factory recommendations, even to the point of melting headlamp lenses and wiring harnesses.

And the lights face challenges at the best of times.

The filament in an incandescent bulb can be one of the weakest links in an electrical system, he says, noting how they face the common threats of over-voltage – particularly during cold weather when so many vehicle accessories are drawing power.

“When that happens, typically over 18 volts, the filament acts like a fuse,” Burdzinski says. It becomes so hot that the filament melts, leaving a tiny metal ball at the end of the lead.

Some bulbs are better equipped to withstand the attack than others. Original equipment LED bulbs, for example, come with better driver boards, resistors and capacitors.

Still, installation procedures play their own role in protecting against these electrical issues.

“You never want to touch the glass [on a bulb]. The oil on the skin can create other contaminants,” Burdzinski says as an example. And a dropped bulb should be discarded whether it looks like it’s working or not. Even if it glows at first, the gas surrounding the filament will leak through the slightest cracks.

Proof can be seen with the smoky residue inside the glass. A white smoke will be a sign of a quick leak, but a black smoke will indicate a slow leak.

It’s just another example of the way everything is connected. 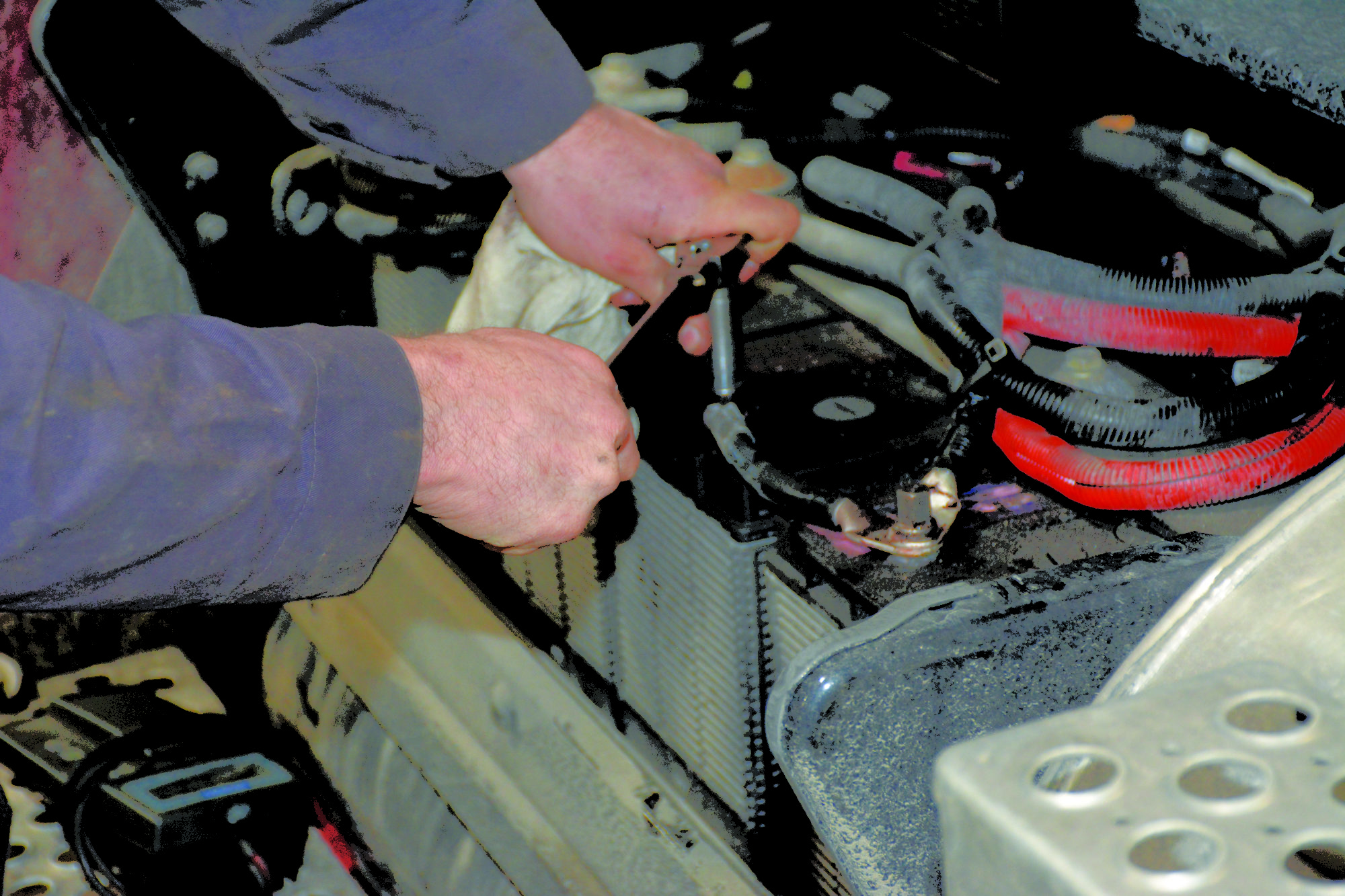 ‘Tis the Season for Battery Checks

Nothing sends a chill up a driver’s spine quicker than a “no-start” condition. And when there is a no-start, the driver “no go”.

Ongoing checks of vehicle batteries will help to ensure that engines crank as temperatures drop.

“It’s a really good time of year to be proactive and test your batteries,” says Dale Henningson, chief research engineer with Purkeys Fleet Electric, noting how heat and time are a battery’s biggest enemies.

It seems strange to hear that heat is the issue, given that trucks are more likely to face starting troubles in cold weather, but the batteries face a heavy workload in the summer.

“The heat is what kills them, but it’s the cold where it shows up,” Henningson explains, stressing the importance of seasonal inspections.

He recommends disconnecting the batteries to test them individually, using a BCI load test. Just keep in mind that requirements will also vary depending on whether the battery is an absorbent glass matt (AGM) or a traditional flooded model.

While AGM batteries have a higher purchase price, Henningson says they can be worth it. “The AGM does have some very good advantages. It’s a sealed battery and the construction makes it so that it holds up better in vibration. They have better cranking capabilities as well as cyclability. You can cycle them more times, so there are a lot of advantages. It really comes down to the application and use.”

No matter what style of battery is selected, however, there will need to be enough cold cranking amps (CCAs) for the job at hand, requiring a close look at an engine manufacturer’s particular recommendations. Even the choice of lubricant can make a difference here – a fluid that maintains its viscosity in colder temperatures will require fewer CCAs.

Just remember that figure isn’t the only consideration.

“Where people often falter in spec’ing a battery is thinking that more cold-cranking amps is better, and that’s usually not the case,” Henningson says. “If you go higher, you’re sacrificing other characteristics.”

The battery with a higher CCA will require more thin plates. This reduces capacity, the resistance to vibration, and cyclability, he says. “Instead of going higher on the CCA, just get what you need and then specify a battery with fewer plates and thicker plates so you get the cyclability.”

The battery’s weight can offer a bit of a guide here. Heavier models typically have the thicker plates.

Those who are responsible for maintaining the batteries should be armed with a tester with a heavy load that will push the battery up to hundreds of amps, Henningson adds. While carbon piles were able to offer such tests in the past, the results could vary depending on a mechanic’s skills.

“The electronics testers are much more repeatable and precise, and they prompt the operators and technicians through the test,” he says.