MONTREAL, Que. – Laurent Bourrut is clearly focused on the future of tires.

As the Michelin’s executive vice-president – long distance and urban transportation business lines, and a member of the tiremaker’s group executive committee, it’s his job. But the future of tires involves more than tracking sales trends. Michelin is exploring ideas that could radically transform the rolling rubber.

Picture tires made with sustainable materials, running without air, replenishing treads with 3D printers, and sharing information over the Internet of Things.

Those ideas all came together in 2017 in the form of the Vision concept tire, and some of the underlying concepts are already on a path to reality. During the recent Movin’On summit on sustainability, Michelin unveiled the UPTIS (Unique Puncture-Proof Tire System) that will enter production as early as 2024 through a partnership with General Motors.

Rather than filling a chamber with air, the UPTIS features a series of open ribs around the circumference of the wheel. The structure itself is made possible through new materials such as enhanced rubber compounds and a resin-embedded fiberglass. 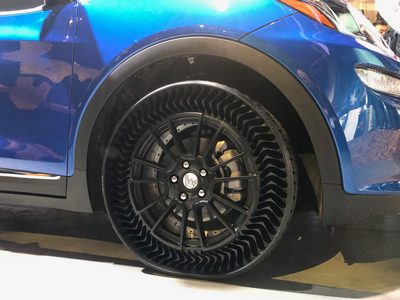 “We are focused on passenger car, second stage maybe vans and light trucks,” Bourrat said of the initial UPTIS applications, in an exclusive interview with Today’s Trucking and Transport Routier. Similar models for heavy trucks aren’t on the horizon. Not yet.

It’s an approach that could theoretically deliver benefits in the form of uptime and reduced waste.

“This is good for the planet,” he said. “Twenty percent of the tires never meet their end of life [because of premature failures]. That means 200 million tires per year. This is about 2 million tonnes of raw material.”

The tires themselves aren’t the only thing to change. Michelin is also rethinking the way fleets might purchase tires – approaching them almost like a service rather than a product.

“We do not sell rubber, we sell kilometers,” Bourrat said. “This is well-installed in Europe, in major countries, and this is also progressing step by step in North America.”

The approach undeniably requires a close focus on tire management, maximizing the distance that can be traveled on every tire that’s installed.

“We have specific competencies, personnel to do so in each location of each fleet, so this is very sophisticated,” he said.

Dealing with the telematics data that can be generated by a tire is a perfect example.

“More than 80% of our tires are equipped with RFID already, so we are entering now in the Internet of Things.”

And with the right insights, fleets would be able to focus their attention elsewhere.

There are clearly obstacles to overcome, not the least of which is traditional business habits. “With such telematics, predictive analytics, predictive maintenance, you need different competencies at the fleet level,” he said. “We need to evolve in this field, bringing fresh competencies.”

These are clearly some blue-sky concepts, but that was the whole idea behind the annual Movin’On summit, which Michelin has supported as a leading sponsor.

“We are really focusing on sustainability,” Bourrat said, adding that isn’t only about building a sustainable business model. “We also need to be sustainable environment-wise because this is in our DNA.”

The company was experimenting with green tires as early as the 1990s, when it began replacing carbon black with silica, improving rolling resistance in the process. And they’re the type of things that continue to separate Michelin from the suppliers of value-priced brands, he said.

“We bring competence, we bring sustainability, and we are respectful of the planet and the people. This is why we are different.”