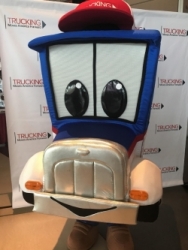 The industry lobby group revealed the name of the new friendly face this weekend at the Great American Trucking Show in Dallas.

Sammy’s plush, wide-eyed, presence was first introduced in Knoxville, Tennessee back in May, where a four-month competition to name him got underway. Sammy’s name was one of 2,000 entries that was whittled down to four, and then voted on by the group’s support network.

Kevin Burch, co-chairman of TMAF, president of Jet Express, and chairman of the American Trucking Associations, said the group was thrilled to officially announce the name and show off the mascot, saying Sammy represents the more human aspects of the trucking industry.

“Safety Sammy represents the safety we strive for each and every day on the road. We’re looking forward to taking Sammy coast to coast to tell the vital trucking story,” he said.

Dedicated to changing the perception of trucking, TMAF says it is promoting the positive economic impact the trucking industry has on the United States through a grassroots effort.

Safety Sammy is available to be promoted at industry events through TMAF.