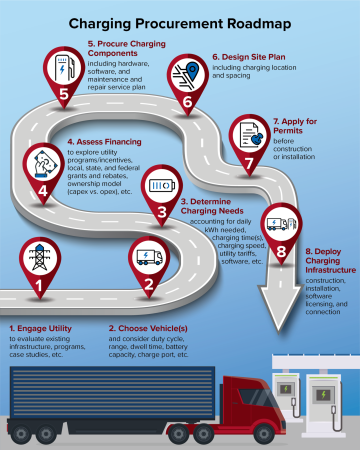 TORONTO, Ont. – Buying an electric truck involves more than adding batteries and electric motors to a powertrain. The vehicles will also require access to charging infrastructure that is just beginning to emerge.

The North American Council for Freight Efficiency (NACFE) has come forward with a report outlining exactly what to consider when planning such a charging network – basing the findings on interviews with electric truck builders, fleets, engineering organizations, charging equipment suppliers, and various groups exploring charging standards.

Fleets will largely be responsible for their own charging strategies in the near term.

“Electric truck charging, for the foreseeable future is going to be private – it’s going to be at the depot or what we call return-to-base charging,” says the Rocky Mountain Institute’s Jessie Lund, the report’s lead author.

Wider charging networks are not expected to be a reality for the foreseeable future. That requires some careful planning alongside local utility providers.

“Fleets should work directly with their utilities throughout the process,” Lund says, referring to the electrical distribution needs that could affect transformers, conduits, and even meter designs. “Utilities are going to need to be partners throughout the planning and deployment stages.”

Smart charging software – which helps different chargers to communicate with one another – will help determine how much power a truck is needed and when it will be charged. That can help to minimize infrastructure and operating costs alike, and minimize the demand charges that could be applied, she says. Lund also warns that fleets tend to over-emphasize the hardware needed for charging stations, but under-emphasize related repairs, maintenance and software.

There doesn’t seem to be much concern about whether the electrical grid could support a growing number of electric vehicles, however. Some capacity already exists today, and other energy-efficient solutions are expected to create additional room. “We wouldn’t need a ton of additional generation,” she says.

“The trucks can’t be built that fast,” adds NACFE executive director Mike Roeth. “We don’t see that as a show stopper.”

Some utility providers are even actively promoting the use of electric vehicles. In the U.S., South California Edison has introduced a new program to suspend demand charges for five years.

In the future, such price premiums could be offset by fleets that generate and store their own energy on site, Lund says. Some academics are even looking at the potential of using parked electric vehicles as the storage systems for renewable energy.

This is NACFE’s third guidance report on emerging and future technologies, and it is available at www.nacfe.org. 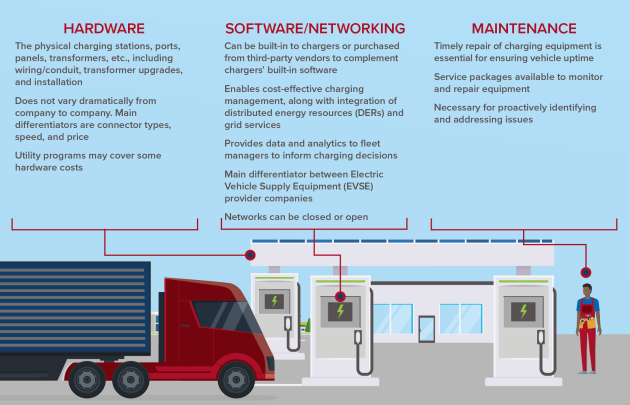