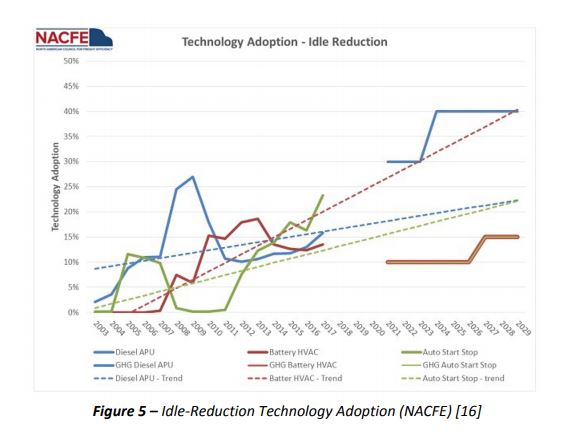 NEW YORK, N.Y. — The organization dedicated to improving freight efficiency in North America is urging fleets to invest in idle-reduction technologies to attract and retain drivers.

The recommendation was contained in the latest Confidence Report, released Tuesday by the North American Council for Freight Efficiency. The report is an update to NACFE’s work five years ago.

“By investing in technologies and practices, fleets can reduce idle to well below 20%. The challenge is figuring out which set of technologies are best for you and being diligent in making it work,” said Mike Roeth, executive director of NACFE.

Each year, sleeper tractors burn millions of gallons of diesel fuel while idling. The average truck idles about 1,000 hours a year, according to the report.

“One of the big findings we have here is that driver expectations are increasing around the hotel environment in the cab,” Roeth said.

The report noted that reducing idle time, particularly on sleeper cabs, saves fuel and improves a fleet’s “green image” as well as helps it achieve emissions and sustainability goals.

It also covers solutions like additional cab insulation and light-colored paint that can enhance a fleet’s idle-reduction efforts.

The report found that the most efficient and effective idle-reduction solution for a fleet entails a combination of complementary technologies used together.

The report concluded that a reduction of 20% is not unreasonable if the right combination of technologies is employed and managed.

“Since every fleet has its own goals, the benefits and challenges of each technology need to be weighed along with the fleet objective to find the technologies that will work best for that fleet,” the report said.

It said that fuel costs are now approximately US$0.37 per mile, accounting for 22% of a fleet’s total operating costs — the second-largest expense for fleets behind only driver wages.

It also noted that myriad technologies are available to improve the fuel efficiency of Class 8 trucks, but multiple barriers have stymied industry adoption.

“By investing in idle-reduction technologies, a fleet can save 1,800 gallons of fuel per truck per year,” the report said.

“If we extrapolate that over 400,000 trucks that may have a need to idle, that is a little over 700 million gallons of fuel.” 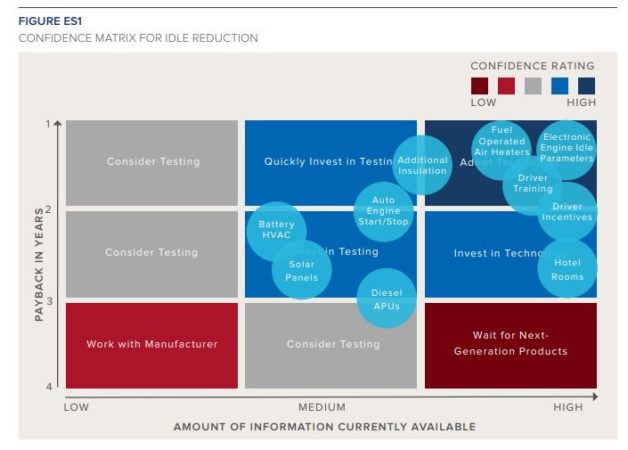 The report also includes a Confidence Matrix and a payback calculator. The full report is available here.

NACFE also conducted a study on the potential viability of intentionally pairing tractors and trailers by model to achieve improved fleet fuel efficiency.

“Basically, our conclusion is ‘no’, except in very niche applications,” Roeth said.

“It is not practical.”

NACFE said 14 leading innovative fleets participated in the survey, which was conducted at the request of an unidentified truck manufacturer.

The full study is available here.