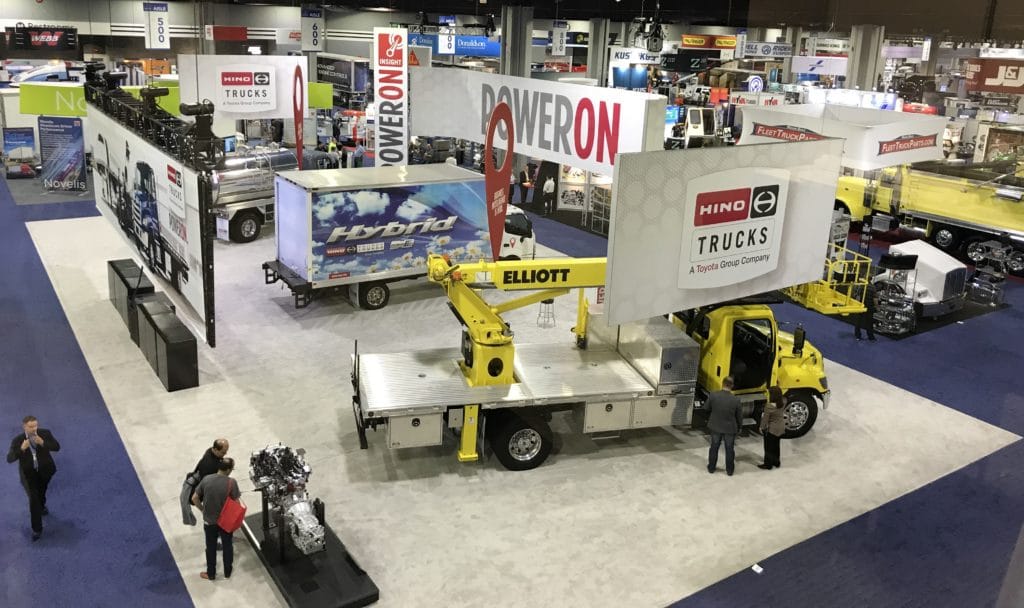 ATLANTA, GA — The inaugural North American Commercial Vehicle Show (NACV Show) is being heralded as a success after drawing thousands of unique visitors during the four-day event in Atlanta, Georgia.

“The NACV Show’s B2B concept was a real hit with our attendees who gave us high marks for launching such a global showcase,” said Larry Turner, president and Chief Executive Officer of Hannover Fairs USA.

“We are happy with the results,” added Joe Glionna, president of Newcom, which also publishes Today’s Trucking among other titles. “A lot of things worked for the larger exhibitors, but we learned that there are some changes required to ensure the smaller booths have the same experience.”

Indeed, organizers are already working on plans for the next show, scheduled for October 28-31, 2019.

The inaugural event opened by hosting the arrival of the North American Council for Freight Efficiency’s Run on Less demonstration, which featured seven tractor-trailers that averaged 10.1 miles per gallon using technologies in the market today. Global press reported on a broad array of product launches and other industry news in the days to follow.

But the show made headlines in its own right – focusing on fleet buyers and basing itself on a model established by the biennial IAA Commercial Vehicles Show in Hannover, Germany. The events are now being held in alternating years.

“We love the sequence as we’re mostly global companies now in this marketplace. We love the alternating continents,” said Roger Nielsen, president and Chief Executive Officer of Daimler Trucks North America. “Daimler is at IAA one year and then here the other year as a global company. It gives us a chance to really take advantage of our global presence. And we’ve refocused the show to be on big fleet customers, as well as suppliers. The NACV Show gives us a chance to bring our dealers here as well and to bring the big fleets together with suppliers and the OEMs. The payback for us has already well surpassed our expectations.”

“The NACV Show is positioned is right at the beginning of the buying season of the large fleets, so it’s a perfect chance for fleets to come and see what we’re showcasing, see what’s coming down the pike and as they settle in their financial plans for the following year it gives us the chance to meet them here,” he added.

“The NACV Show was non-stop,” said Jonathan Randall, Mack Trucks’ senior vice president – sales. “The reason it’s been non-stop is it’s been meetings with customers. Our customers are here. It’s not just the drivers that are here, it’s the fleet managers, the decision makers, it’s the guys with the purse strings that make the decisions. If that continues and that’s the type of audience we see, then there’s a future for that because we are always looking to get in front of those decision makers especially when we have new product to show.”

“Bosch has years of experience with the IAA shows, and when we heard the NACV was coming, we decided very shortly that it would be one of the shows that we really come out on. It was one of the reasons we decided to take our demonstration truck here. It’s always good when you have all of the OEMs together and supply base together. It really gives everyone a boost for the industry,” said Jayson Roycht, vice president – North American regional business leader, commercial vehicle and off-road.

John Nelligan, Meritor’s vice president sales and service, said: “Meritor saw a lot of the fleets we needed to see. We had meetings with suppliers, and it has been well worth being here for the week. It’s been busy, it’s been hectic, it’s been a great show for us. What we did with our e-axle has generated a lot of interest and a lot of people have been visiting the booth to see what we’ve got going on.”

“I think the show is unbelievably innovative,” offered Cory Hiesser, lean engineer at Manac Trailers. “All the products I’ve seen on display are things I’ve never seen before and are very interesting. The show has also helped me make some good connections.”

“From what I see, the NACV Show is much more accommodating, and the venue is great, it’s easy to navigate, and the displays are fantastic. Everyone at the booths are more than willing to explain their products and offerings and sit down with you,” he said.

“This is a great show. A lot of customers are here – major fleets and OEMs. We’ve been kept busy non-stop. I’ve been meeting fleets from Iceland, Jordan, Chile, all over the world, and that’s something unique about the NACV Show,” said Josh Butler, president and Chief Executive Officer of FlowBelow.

“I’ve learned a lot at the show. I like that I’m talking to the right people from the right companies and having the opportunities to discuss products with them,” said Colin Slade, Trailer Wizards purchasing director, who attended the show. “I’m not bumping into wagons, or kids, or fighting crowds and families to get to the new booth. I’m meeting industry people that we compete with and do business with at the show, and we’re getting to network with them as well, so, the show is a huge success for us.”

“I love the show. This is the show we will always come to as long as it continues,” he said.

“We look forward to seeing many of our exhibitors and attendees at Truck World in Toronto that takes place April 19-21, 2018, and at the IAA Commercial Vehicles show in Hannover, Germany, that takes place September 20-27, 2018,” added Turner.