NEW CARLISLE, IN — Looks can be deceiving. International’s new LT highway tractor may look much like the 11-year-old ProStar it replaces, but the resemblance is barely skin deep. The LT retains the signature International grille — though it’s shaped differently if you look closely — but almost everything behind the grille was touched in some way by the sweeping overhaul of the company’s best-selling highway truck.

The primary drivers in the reshaping exercise were increased fuel efficiency and driver appeal. “If drivers do not want to drive the trucks, fleets aren’t going to buy them,” noted Denny Mooney, International’s senior vice president – global product development.

Designers conducted dozens of driver clinics to get feedback from folks who use the product, and a few interesting themes emerged. For one, truck drivers want a truck designed like a truck. “Career truck drivers aren’t interested in automotive designing like chrome accents and such. They want trucks designed to do a job,” said Jeff Sass, International’s senior vice president – sales and marketing, when the truck was unveiled.

Feedback from drivers resulted in a review of more than 500 points of contact between the driver and the truck that produced a cab with more elbow, hip, and leg room along, with a more ergonomic but truck-like dash layout and greatly improved mirror design. By popular demand, International even put the air horn back where it “belongs,” on a lanyard above the driver-side door.

Sass calls the LT “the most driver-centric Class 8 vehicle we’ve ever built.”

A very close second priority to driver preference at the design stage was fuel economy. At the Las Vegas launch of the LT on September 30, 2016, International’s then-president Bill Kozek said the 2018 LT with an N13 engine would be 7% more efficient than a 2017 ProStar with a Cummins ISX 15 engine. He claimed a 3% improvement in aerodynamic efficiency alone, with lighter weights and new engine technology contributing the remaining 4%. When International’s new engine, the A26, appeared in February, Darren Gosbee, International’s vice president – advanced engineering, said the A26 would boost fuel economy by 5% over its predecessor, the N13.

If you’re not keeping track of the numbers, that’s a potential fuel efficiency increase of close to 10% compared to a 2017 ProStar. At the A26 launch event, Gosbee said an A26-equipped LT highway truck bettered 29.4 liters per 100 kilometers over three runs on a 765-kilometer fuel-economy test route known as the Illinois Hilly Route, said to simulate real-world driving conditions for 75% of International’s customer fleets.

The LT is a considerable step forward from the ProStar. Beginning with the cooling module, the A26 engine uses the same radiator as the X15, so there’s considerable cooling capacity there. The interstage cooler has been dropped, so there is only the rad and the AC condenser up there. A new rubber gasket around the rad seals out dust that gets kicked by the fan, so the fins stay cleaner for longer, preventing clogging and a loss of cooling capacity over time.

You’ll hardly ever hear the fan come on, and when it does, it’s much quieter because it has only six blades rather than the previous 11-blade model. It draws 31 horsepower less than the larger fan, and is much easier on the fan clutch, too.

The hood is now taller at the top, and longer overall, stretching the bumper-to-back-of-cab measurement to 125 inches. This, the company says, improves the front profile of the truck for smoother air flow and less drag.

Built into the hood are a pair of splash guards that were formerly chassis-mounted. This makes engine access much easier while still protecting from muck.

The three-piece bumper offers a couple of advantages. First, it’s less expensive to repair than a one-piece bumper. Second, it’s available in several different configurations, depending on the type of trailer you pull. Aero research conducted during International’s SuperTruck project revealed that the bumper has a large influence on how airflow interacts with the trailer, whether there are side skirts, no side-skirts, trailer tail or not. The bumper also sits about eight inches off the ground to minimize damage from curb strikes.

The suspension at the rear of the cab now has a wider stance, giving the cab a distinctly more stable ride. The fuel tank mounts and the spring hangers in the International Ride Optimized Suspension (IROS) are made of cast aluminum, saving close to 200 pounds in chassis weight.

The doors were redesigned and made two times stiffer than the ProStar’s doors, International says. The new doors are also canted slightly inward at the top to force a tighter seal around the opening. This helps keep out cold drafts as well as noise. Stiffening the door also helps reduce vibration and the associated resonant noise.

The new mirrors are perhaps the most striking change. They are now pedestal-mounted and set significantly further forward than the ProStar’s, which reduces the degree to which a driver’s head has to twist to see them. And they are mounted low for better visibility alongside the truck. What’s more, when looking out the right-side window, I could actually look over top of the mirror at traffic approaching from that side. This eliminates a dangerous blind spot that exists on most other Class 8 cabs.

The sleeper on the truck I drove was the 56-inch HiRise model with the Diamond interior. My tour guide, International’s director of product marketing for on-highway trucks, Bill Distel, called this one the J.B. Hunt Special. I’d call it a regional-plus sleeper — more than adequate for a few days on the road. It’s not what you’d call plush, but it’s airy and comfortable with lots of storage.

The cab is where International’s design team really went to town. Highlights of the redesign include a completely new HVAC system, tons of room around the driver’s seat and between the seat back and the wheel. The dash now features a 5.5-inch display set between the speedometer and the tach. It’s bright and easy to read, and drivers can scroll through at least a dozen screens of useful information. My ride did not have the B-panel display where a navigation screen, an ELD, or another digital gauge display might go. Mine had the cubby hole. The trim package on the truck seemed to be a combination of the Classic and Diamond package. I had the wood-grain trim and colored accents from the Diamond package, but it was missing certain features like the optional gauges on the outer side of the B-panel.

New with the LT is a stalk-mounted transmission control that also controls the engine brake. It’s easy to use and much easier to handle than the old one was, mounted on the dash board. Moving the shifter opened up some room for three large cup holders on the lower portion of the dash panel, leaving still enough clearance to swing your legs past when pivoting from the driver’s seat to the sleeper.

Out on the road

Driving the LT was a very satisfying experience. The cab is super quiet even when the engine is in a good pull. Bill and I were able to carry on a conversation without raising our voices. The driving position was spectacularly comfortable and seemed designed to fit my frame. I spent a few minutes fiddling with it before pulling out, and suspect that with the range of movement in the seat, almost any driver will be able to dial in a comfortable a position.

The A26 engine and the Eaton Advantage 10-speed were very nicely paired, and the shift calibrations favored low-rpm shift points and skip shifting, as they should. Engine braking was quite adequate even in the second position, and downright aggressive in the third position. That VGT ups the engine brake’s game on what many would consider a medium-displacement engine.

Much of my route was on two-lane road, and even some nice twisty two-lane roads, which provided a better impression of the truck’s steering and handling. Here, the stiffer cab suspension became obvious, and the mildly stiff steering was a joy to drive.

There’s not much I would change on the LT. The noise attenuation was great, the performance and handling was top-notch, and the overall driving experience was, as I said, very satisfying. The ProStar was never one of my favorite trucks, but the LT has boosted my opinion several notches. I’d take the helm of one of these anytime. 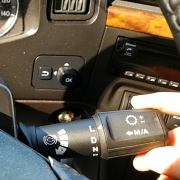 International’s new 12.4-liter engine, known as the A26, replaces the N13 and comes with ratings of 370 to 475 horsepower and 1,350 to 1,750 lb-ft of torque. It shares a block, crank, and a few other components with the European MAN D26 engine, but the fuel, cooling, intake and exhaust systems are new for the North American market. It weighs 2,229 pounds.

The A26 is quite different from the N13. For example, it has a single-stage variable-geometry turbocharger with a high-strength titanium compressor wheel, and a 36,300-psi high-pressure common rail fuel system. The Exhaust Gas Recirculation system has been redesigned and now features a stainless steel, laser-welded, single-stage EGR cooler. Several lightweight components such as an aluminum flywheel housing and composite valve covers and oil pan help make the A26 about 50 pounds lighter than the N13.

Oil change intervals have been extended out to 110,000 kilometers in certain cases, subject to the manufacturer’s approval, but typical applications will see intervals of 50,000 to 80,000 kilometers. DPF cleaning intervals range from 550,000 to 950,000 kilometers depending on lifetime fuel economy. International says the engine has a B10 design life of 1.9 million kilometers, and it comes with a two-year warranty with unlimited miles.