GREEN BAY, Wisc. — Schneider announced recently that it has hit a major milestone.

Th company has purchased its 15,000th intermodal container chassis in its conversion to a company-owned and -managed chassis fleet. Schneider said it anticipates that full network implementation should be complete in 2017. It began implementing its program in 2014. 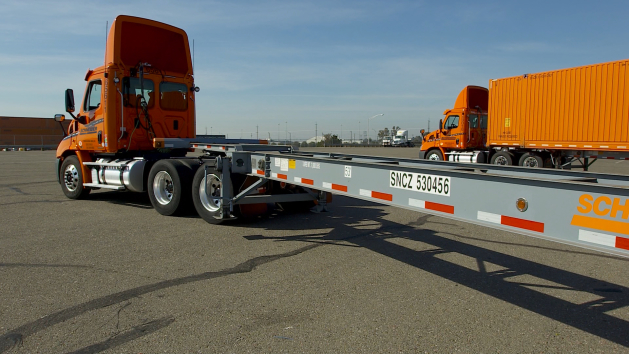 “We saw significant issues with the shared chassis pool, causing delays for drivers primarily at the ramp or when experiencing a breakdown on the road,” said Jim Filter, senior vice-president and general manager of Schneider’s Intermodal division. “That downtime gets costly for shippers. Shippers can now find comfort in working with an asset-based intermodal provider that has complete control of its company-owned and maintained equipment, along with its fleet of professional company drivers.”

“Schneider now has a standard chassis,” added Filter. “It is 500 pounds lighter than the lightest chassis in the shared pools; we can plan on that to eliminate the need to reconfigure loads while allowing customers to move up to 45,500 pounds of product.”

You can watch a  video describing the intermodal chassis conversion  on the Intermodal Services page of Schneider’s website.