TORONTO, Ont. — A Toronto freight transportation company is looking to harness Leafs fans’ frustrations and turn them into something positive.

Scout Logistics has launched a Not In Our Lifetime campaign. It’s asking people to take a selfie of themselves wearing (not throwing) a Leafs jersey and holding a sign with their birth year on it. They are then asked to post the picture on Facebook, Instagram or Twitter with the hashtag #notinourlifetime.

Scout will post some of the best ones on a new site www.NotInOurLifetime.org.

“It’s a playful way of building some Leafs spirit and driving the team towards the playoffs,” says Lorne Swartz, president of Scout Logistics, which provides freight transportation across Canada and the US. “Toronto’s been waiting a long time for the Leafs to bring home the Stanley Cup, and by putting on our Leafs jerseys and sharing our birth year we’re basically saying ‘hey, I’ve been a fan since I was born, so how come the Leafs have never won a Stanley Cup in my lifetime?’”

For each of the first 5,000 posts, Scout will donate $5 towards Alzheimer’s research at Toronto’s Baycrest Health Sciences, up to a total of $25,000. It will also donate 50 cents anytime someone shares the company’s Facebook post a bout the Not In My Lifetime campaign. And if the Leafs make the playoffs this year, it will give another $25,000 to Baycrest.

“A picture says a thousand words, and with these pictures we’re expressing our unfailing fan loyalty and belief in the Toronto Maple Leafs, even though they haven’t won the Stanley Cup since 1967,” says Swartz. “So come on Leafs, do this for your fans and for a very worthy cause.” 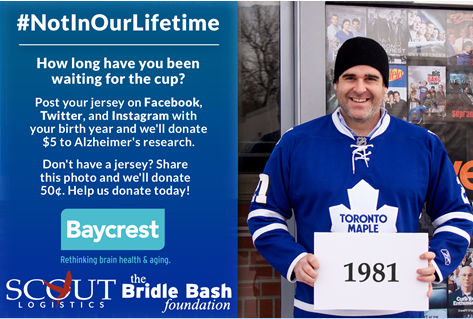