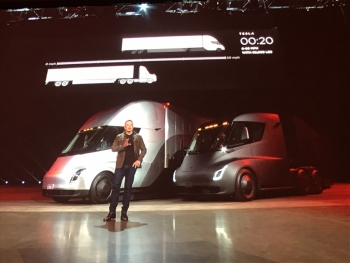 HAWTHORNE, CA – Elon Musk has officially unveiled the all-electric Class 8 Tesla Semi, following months of speculation and delays. Now the question is whether his company will become the industry disruptor it wants to be.

A pair of prototype day cabs unveiled in California on Thursday featured a streamlined bullet-like design, evoking a look traditionally left to concept vehicles. And there were plenty of world media representatives there to share in the experience, each shepherded into a secure hanger for a brief peek.

Just a day before, Musk went so far as to tweet this truck “can transform into a robot, fight aliens, and make one hell of a latte”. Yes, it was hyperbole – there was no cappuccino machine anywhere — but the Chief Executive Officer and product architect attracted plenty of attention for his latest announcement. More than 1,000 people were on hand for the launch, cheering every point that Musk made, especially when a new roadster rolled out of the back of the trailer.

Loblaw and Walmart are two of the first fleets that have ordered trucks for tests in Canada.

The Tesla Semis will reportedly have an 800-kilometer range. A high-speed DC charging station will take 30 minutes to add enough energy for about 650 kilometers, while other energy is supplied through regenerative braking.

“You can go out to the middle of nowhere and come back,” Musk added, referring to the maximum range as six to seven hours of driving. “By the time you’re done your break, the truck will be ready to go.”

Those who generate energy supplies through solar-powered mega chargers would see greater savings yet. “Your truck is money on sunlight,” he said.

“The economics of trucking matters immensely,” Musk explained. Combining lease, insurance and maintenance, a diesel truck will be 20% more expensive than a Tesla Semi per mile. Even on the first day, he stressed. That’s based on US $1.26 per mile compared to $1.51 per mile.

This is hardly a Model 3 car, but the Tesla Semi does draw several components and design cues from its four-wheeled brethren. Both vehicles use common electric motors, for example. But unlike the car that draws power from a single motor, the truck has four of them – using a pair on each drive axle to ensure independent controls. That can help to prevent jackknifes by reacting with positive or negative torque on each wheel end along with independently applied brakes, Tesla says.

“It’s unlike any truck you’ve ever driven,” Musk said, referring to the driving experience. “Jackknifing is impossible. Your worst nightmare is gone from this truck.”

The battery at the heart of it all sits under the cab, behind a protective barrier, offering a low center of gravity.

When unveiling features, Musk was quick to stress the difference in speeds between diesel trucks and this one. A bobtailing Tesla Semi will reach 97 kilometers per hour in five seconds, while one laden to 80,000 pound Gross Vehicle Weights will reach the speeds in 20 seconds. Perhaps more relevant, the truck will climb a 5% grade at 105 kilometers per hour. With no shifts or clutch actuations, the truck is expected to accelerate or slow smoothly, while regenerative braking recovers available kinetic energy. 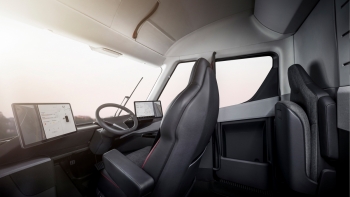 Cab doors are opened with streamlined, tuck-away handles also found on Tesla cars, revealing a pair of stairs leading inside. But unlike a traditional truck, the driver’s seat is mounted at the center, like in a race car, Musk said. A jump seat for a passenger is mounted just to the right, against the back wall.

“It’s a beautiful spacious interior. You can stand up inside,” he said.

The steering wheel itself is flanked by a pair of touchscreens (also borrowed from the Model 3) that offer access to the navigation system, blind spot monitors, and an Electronic Logging Device, among other gauges. Telematics capabilities will integrate with existing fleet management systems to cover everything from routing to remote monitoring, Tesla says. One activated screen on display in the prototype also included electronic tractor protection valve and trailer supply valve.

A Tesla app will offer information about the truck, he added. “The truck will actually anticipate when it needs maintenance.”

Cameras have been mounted around the vehicle, above and below the windshield, and on small wings mounted behind each door. In addition to the enhanced view they offer, the images will support enhanced Autopilot features such as Automatic Emergency Braking, Automatic Lane Keeping, Lane Departure Warnings, and event recording. The Autopilot is a standard offering.

The system will automatically call emergency services if there’s no response after an emergency braking event. “This is a massive increase in safety,” he said.

“I can drive this thing and I have no idea how to drive a semi.”

The Tesla Semi even promises a form of platooning — what Tesla refers to as a “convoy” — where several of the trucks follow one in the lead. “You’re more like a train driver,” Musk said, suggesting that it can be done 10 times safer than a human driver. “Now, [in a convoy], a diesel truck is twice as expensive as a Tesla Semi.

As an electric vehicle, there are several maintenance savings to be had in the form of fewer parts. There is no internal combustion engine, aftertreatment system, transmission or differentials, for example. Lifting the hood exposes extra storage space rather than an engine compartment.

“Reliability is incredibly important,” Musk said. “We’re guaranteeing this truck will not break down for a million miles [1.6 million kilometers].” If two motors happened to break down, the truck would still move, and even at that reduced capacity it would still reportedly beat the speed of a diesel-powered truck.

A quick walk around the truck exposed some familiar components, though, ranging from a Jost fifth wheel to what looks like a traditional suspension. Tractor-trailer gaps are closed with side extenders, and the bottom of the truck is covered with a smooth panel to further enhance aerodynamics.

“This has got a better drag coefficient than a super car,” Musk said.

The market will decide just how smooth the manufacturer’s ride will be. 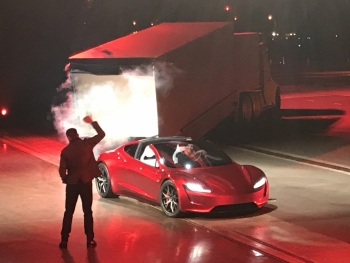