MISSISSAUGA, Ont. – All collisions are preventable and 80% are due to driver distraction.

That was the message from Bruce Brunsch, a retired police officer and now collision reconstructionist with Split Second Decision. He was speaking at Workplace Safety & Prevention Services’ Partners in Prevention trade show and conference April 30. 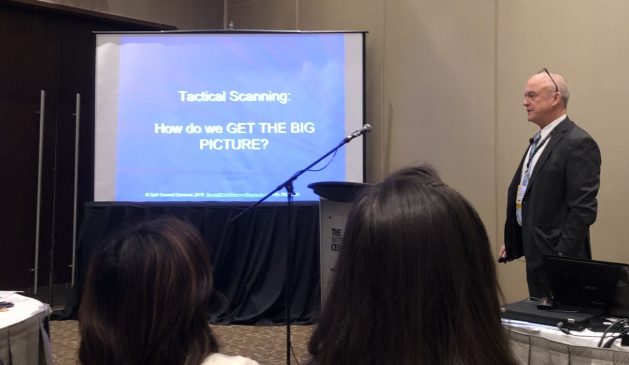 Brunsch refused to refer to collisions as accidents, noting every one is preventable. As a collision reconstructionist he pieces together what caused a crash by working from the end of the crash backwards to the beginning.

“I wanted to give answers for people who couldn’t talk anymore, and get answers for families,” Brunsch said of what drew him to the profession. He said he’s investigated thousands of crashes, and all are explainable.

“I’ve never seen a crash I can’t explain,” he said. “It’s not an accident. There’s a cause and an effect and it doesn’t happen out of the ether.”

Brunsch shared some advice on how to prevent crashes, including “checking in” to the task of driving the moment you get behind the wheel. This includes when driving to work.

“Your drive to and from work is part of your job,” he said. “Don’t go on autopilot.”

Being a safe driver also means refusing to resort to road rage because of the actions of other motorists. If a car cuts you off, don’t get mad, Brunsch advised.

“That person doesn’t even know you exist,” he said, adding they were likely distracted. “They’re checked out.”

Getting angry makes a driver more likely to make mistakes. “We get so pissed off, we take a personal affront to it. And we get distracted by it,” he explained.

While a crash occurs in .10 to .25 seconds, it takes a driver 1.5 seconds to react to a situation. And reaction times can become slower as drivers age. Brunsch instructs drivers to look as far ahead as possible, and to always scan the horizon. He even advises talking out loud about what you’re seeing in the distance.

He also advised drivers to practice positional awareness. He investigated a fatality where a truck driver was run over by his friend, who was backing a trailer in the yard.

Brunsch suggested practicing situational awareness by parking the truck along lines in empty parking lots, getting the tires as close to the line as possible. It’s a way to become comfortable with the size of the vehicle you’re driving.

It’s also important to leave lots of space. A car traveling at 100 km/h takes 60.56 meters to stop. When approaching curves, be aware of the “critical curve speed” – the speed at which a rollover will occur. Wet roads will reduce the critical curve speed.

“Every road, every curve is different,” Brunsch warned.

Seatbelts must always be worn. He showed an in-cab video from a truck rollover test. The unbuckled occupant was flipped around like a rag doll, while the buckled driver was kept in position.

“They’re designed to help keep you in position if an airbag deploys,” he said.

Brunsch also urged attendees to eliminate distractions by keeping their cellphones and handheld devices turned off, or placed out of reach.

“Our brains only work on one task at a time,” he said. “When you look at your phone, you’re not thinking about driving.”

And distractions aren’t limited to cellphones. Brunsch said if you’re distracted by something else – whether it be an argument with your significant other, or a dispute at work – park the vehicle until you’ve calmed down.

He left attendees with three missions: to practice seeing the big picture by scanning the horizon; to practice positional and situational awareness and learning the size of your vehicle; and to eliminate distractions while driving.