NOTRE-DAME-DU-NORD, Que. — Spectators came from as far away as Japan to witness the spectacle that is Rodeo du Camion in this northwestern Quebec town Aug. 2-5. The main attraction is the truck racing, which sees bobtails and fully-laden B-Trains loaded to 62,500 kgs drag racing up a public street with a 12% grade, as thousands of spectators line both sides of the track.

Black smoke billows out of the gleaming stacks, the diesel engines roar, and the fans roar back in appreciation over and over again during the course of the one-of-a-kind event. Some drivers put as much as $500,000 into prepping their rigs for the races, while others with more modest pocketbooks compete in the stock category, which limits modifications.

But the real badass trucks put out 2,500-plus horsepower and repeatedly brought the fans to their feet.

“The driver makes a difference, and after that it’s the wallet,” admits Michel Denomme, who competed in the stock class, finishing fourth in the bobtail category. He owns 15-truck fleet MD Transport and has been racing at Rodeo du Camion for more than 20 years. He figures he has spent about $10,000 getting his truck race-ready, despite the limitations placed on the category. 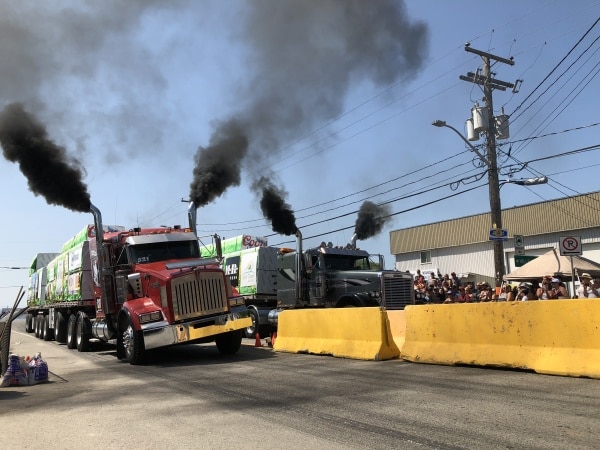 Racing legend Nicolas Gagnon and his Coga Racing team topped the A Class, representing the fastest trucks, in both bobtail and loaded categories. His truck is powered by a Cat C18 engine with 2,000 hp “and a lot of torque,” he told Truck News.  He had won his first two heats when we caught up with him and was feeling confident.

“I’m happy,” he said, and for good reason, as he went on to take the top prizes.

For many, truck racing and the Rodeo are family traditions. Robert Kurtz raced the 1968 Kenworth that his father Brent won with in 2001. He is the grandson of Brian Kurtz, who founded Brian Kurtz Trucking.

“Dad’s pretty excited for it to come out again,” the younger Kurtz said. He’s been racing for about four years now and the truck he drove this year was built for this event in the late ’90s.

“This is the first time it’s been back racing,” Kurtz said. The truck is powered by an N14 Cummins with about 850 hp.  Asked what attracts him to the event, Kurtz said “Something about 20,000 lbs of steel taking off.”

Martin Groulx of Montreal, Que., was parking his truck after losing out to a Coga driver when we caught up to him.

“When you get Coga, your chances are smaller,” he said. Groulx has been racing at Rodeo du Camion since 2009 and also competes in other truck races in the province. His truck sports a heavily modified Cat engine putting out about 2,000 hp.

“It used to be a working truck but not any more since last year,” he said. He finished seventh in the A Class bobtail category when all was said and done.

Finishing one spot behind him in the same category was Dominic Chantal, who was debuting a new custom-built race truck. The key to a good run, he said, is the start.

The other key to success is keeping the truck in one piece. Breakdowns, unfortunately, were frequent and required repairs to be made within 30 minutes to get back into the game. It was especially disheartening to see a truck all the way from Michigan fail to get off the starting line – his day was over before it began.

This year marked the 38th year Rodeo du Camion has taken over this small town. Organizers say the event brings in $4.5 million in economic benefits. One of the highlights is the draw prizes. The top prize is a three-year lease on a 2019 Pete 389, or $100,000 in cash. Albert Viger and Marielle Bergeron were the lucky winners, opting for the cash. Another major door prize, won by Daniel Laroche, was a choice between a new Ford F15 or Jeep Wrangler. In total, more than $200,000 in prizes were given away.

When spectators needed a break from the smoke and the noise, a well-populated show-and-shine was located nearby. The serenity here contrasted the organized chaos over at the race strip.