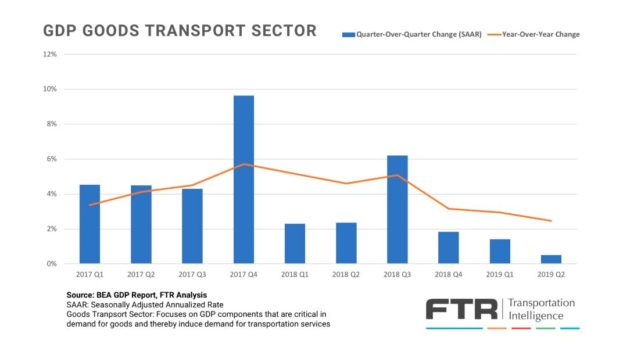 BLOOMINGTON, Ind. – U.S. demand for and transportation of goods in the second quarter of 2019 remained weak despite an economic growth of 2.1%, FTR said Tuesday.

The freight transportation forecaster estimates that GDP for the Goods Transport Sector rose at a seasonally adjusted annual rate (SAAR) of just 0.5% in the second quarter. To put this into context, the GDP Good Transport Sector grew 3.2% in 2018 and 5.7% in 2017, FTR said.

“It’s a slow growth environment now, but it feels worse than that because the freight markets were so extraordinarily hot in 2018,” said Eric Starks, FTR’s chairman and CEO.

“However, while freight volumes are holding up as of now, most of the risks seem to be on the downside, especially with tariffs and the overall trade climate.”

Data for the second quarter did bring some encouraging news for the freight demand outlook, FTR said.

“It may seem counter-intuitive, but the inventory decline seen during Q2 has potential benefits down the road. Inventories count positively in the GDP calculation, but they tend to depress future freight volumes.”

It noted that GDP for the Goods Transport Sector in Q2 rose at an SAAR of 2.0% over the first quarter.

“Growth of 2% in GDP for the Goods Transport Sector is typically seen as the minimum level needed to keep the freight markets stable.”