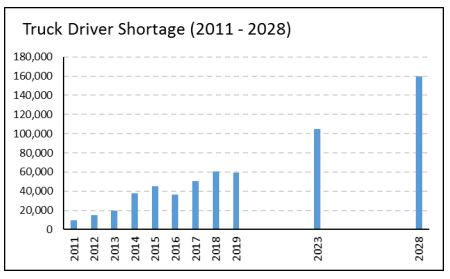 “Over the past 15 years, we’ve watched the shortage rise and fall with economic trends, but it ballooned last year to the highest level we’ve seen to date,” said ATA chief economist Bob Costello.

“The combination of a surging freight economy and carriers’ need for qualified drivers could severely disrupt the supply chain.”

An aging driver population, increases in freight volumes and competition from other blue-collar careers were the main reasons for the shortage.

The report, however, said that the shortfall is expected to ease slightly by the end of this year from a combination of slower economic growth and a small bump in supply.

In order to meet America’s freight demand, the report said the trucking industry will need to hire 1.1 million new drivers over the next decade – an average of 110,000 per year to replace retiring truckers and keep up with growth in the economy.

In Canada, it is estimated that the industry will face a shortage of close to 50,000 drivers by 2024.