LAS VEGAS, Nev. – Brian Snell of Pottle’s Transportation has been named the 2018 Highway Angel of the Year.

The former paramedic, Marine Corps veteran, and rescue worker at Ground Zero, was honored with the award at this year’s Truckload Carriers Association (TCA) convention in Las Vegas. 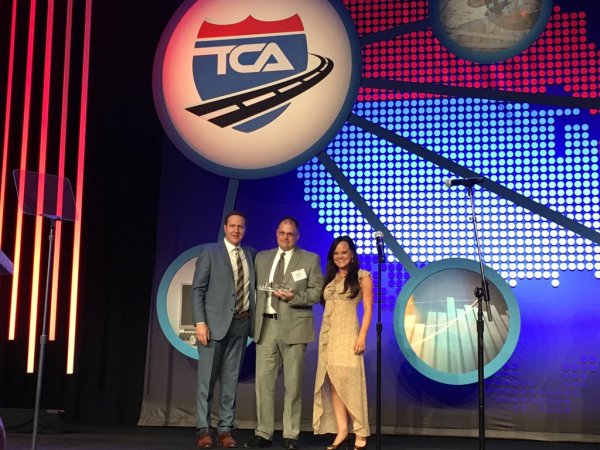 The award is reserved for drivers who display exemplary acts of kindness, courtesy, and courage while on the job.

According to EpicVue’s CEO Lance Platt, who presented the award, Snell won the award for his heroic efforts on June 8, when he recused a trapped motorist from a crushed vehicle before it caught on fire, and saved a dog who was in a second vehicle at the scene after the driver passed away after the crash.

At 2:15 a.m. on June 8, 2018, Snell was driving along the I-495 in Massachusetts when he saw a vehicle driving the wrong way on the road. It then spun out in front of his truck. Snell stopped his truck and got out to help the driver, a woman, who was unconscious. While helping resuscitate the woman driver, he noticed the car engine was on fire, so he got his fire extinguisher to put it out. He then heard someone yelling and realized that the unconscious woman had hit another car head-on before stopping. He ran over and checked the driver’s pulse, but realized he had passed away. He noticed a dog in the car, and got the dog out safely. From there, emergency personnel took over.

It was later revealed that the woman was heavily intoxicated and charged with vehicular homicide.

“He is a professional truck driver who truly embodies the (Highway Angel) program’s spirit,” Platt added.

Snell was emotional when he accepted his award, and thanked the TCA, Pottle’s Transportation, and EpicVue.

“It’s an honor to win this award, and I greatly appreciate it,” he said. “We’re all called upon to be that good Samaritan, and that’s what I was supposed to.”