MONCTON, N.B. – The fifth ever Canadian Salute to Women Behind the Wheel took place at this year’s Atlantic Truck Show in Moncton, N.B. on June 8.

The salute, which was organized to honor and recognize women who drive trucks professionally, was presented by the Owner-Operator’s Business Association of Canada (OBAC), co-hosted by the Atlantic Provinces Trucking Association (APTA) and Trucking Human Resources Sector Council Atlantic (THRSC Atlantic), in partnership with Women in Trucking (WIT). 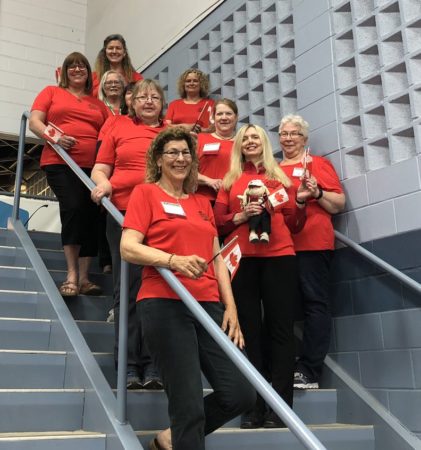 The first Salute to Women Behind the Wheel took place in 2009 at the Mid-America Trucking Show in Louisville, KY, while the first Canadian event took place at Truck World 2016 in Toronto, drawing more than 40 drivers.

The salute this year at the Atlantic Truck Show honored 10 female drivers, most of whom had more than a decade of commercial driving experience under their belt. Two members of WIT’s Canadian Image Team were in attendance as well, Jo-Anne Phillips of Irishtown, N.B. and Susie De Ridder of Fredericton, N.B.

“Today we’re here to celebrate the drivers, but there’s so much that women offer in the trucking and transportation industries,” Phillips said at the salute. “So, I think us getting out there and talking about it and showing what other careers are out there for women is great. We have so much to bring to the industry, and the trucking industry needs more women.”

The women at the salute also took the ceremonial group photo in their red salute T-shirts to mark the event. The salute ended with door prizes as well as cake and refreshments for the drivers.