Shari’s story is difficult to hear, but we need to listen.

You can almost picture the 15-year-old and her cousin heading to Wendy’s to buy a Frosty, one of those everyday experiences of childhood. The guy in the Lincoln says he’s related to a high school friend. They hop in for a ride and head to his place.

But as they step into the brick home, he shuts and locks the door behind them. They’re not leaving. Her cousin is dragged upstairs. Shari is forced into the basement. Other girls already in the house warn her to do what Derek says. Or else. 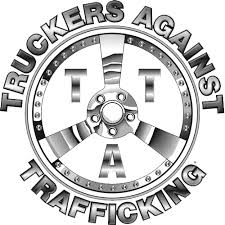 The life she knows is over. Now she’s a product, shipped to a string of motels, strip clubs and travel plazas to be trafficked for sex. The one time she and her cousin decide to run away, Derek is waiting for them. Maybe he hadn’t been asleep after all. Maybe he was playing some sort of mind game. Shari is thrown into a table, her cousin dragged away by her hair and thrown down the stairs.

Their only hope comes thanks to the report from an anonymous truck driver.

“There are a couple of girls at the Exit 167 trying to do business out here,” he says on the recorded call.

It’s the first detail that sparks a police investigation which ultimately shuts down a 13-state child trafficking ring, convicting 31 offenders. Seven minors are freed from the slavery, and Shari is one of them.

Today Shari’s story is the cornerstone of a training video for Truckers Against Trafficking – a grassroots organization that’s mobilizing truck drivers to identify and report the sex trafficking happening in their midst. They become the eyes and ears in the fight against the pimps who trap their victims, rent them out, and pocket the proceeds.

The signs of trafficking are clear enough to spot when you know where to look. It might be a van that pulls into a truck stop parking lot with five or six scantily clad young girls, or the parked trucks that flash their lights to convey there are willing customers inside. The chatter on the CB turns to phrases like “commercial company” or the need to make a quota.

None of the kids who are trafficked choose this life. The pimps force it on them. They’re more than willing to prey on children – especially those who have a history of abuse or trauma, like the runaways who lack social networks for support.

The help they need might emerge after a driver asks a few questions: Are you traveling by yourself? No? Who’s with you? When’s the last time you saw your family? Can you come and go as you please?

Even a gut feeling can be reported to the Truckers Against Trafficking hotlines – the 833-900-1010 in Canada, or the 888-3737-888 when in the U.S. Every detail matters. Just reporting a suspicious vehicle, its color, plate, and the number of girls who seem to be shuttled from truck to truck in a parking lot can give police the details they need.

And it makes a difference.

“I have an opportunity to actually have a life,” Shari says on the video. “Without that it would have been a total opposite – but here I am. I’m sitting here with my mom.

“Because of that trucker, I have a future.”

The Truckers Against Trafficking website notes 1,206,596 people have already completed the organization’s training on the issue. Dozens of carriers have participated here in Canada, where the organization only recently expanded.

July 30 is World Trafficking in Persons Day. One of the key steps to tackling this issue is to complete the training so you know where to look.

I now have a better understanding of where to look.

Because I’m John G. Smith. And I count myself among the truckers against trafficking.