I live in the small town of Acton where not too much happens. About 10,000 people, very low crime rate, pretty well a homogeneous, white toast, working class community with not too much economic stratification. This adventure occurred in February, on a night that wasn’t great for driving.

When I arrived at the Halton Police substation Friday night, snow was blanketing the top of Constable Dan Covato’s Ford Taurus Sports Utility cruiser. For the next five hours I rode beside the 6 foot, 28 year old officer, as he tirelessly patrolled the highways and back roads around Acton,. 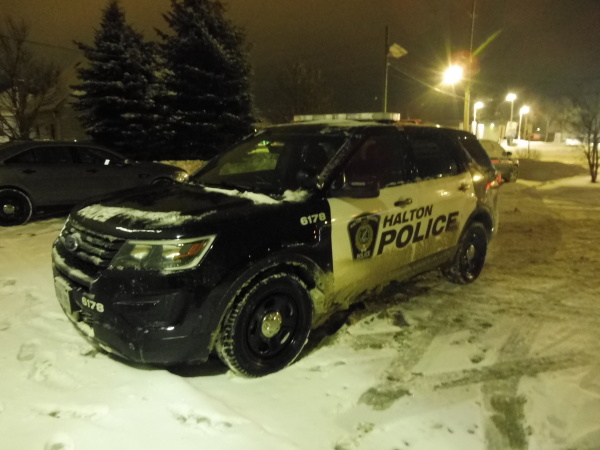 Early in the evening, we had just made a turn on Highway 7. The road was icy and only partially plowed. We were chasing a pack of speeding vehicles scampering westbound towards Trafalgar Road. “The speed limit is 80 here and he’s doing 100 in these conditions,” Covato said as he flipped on the blue and red strobes and pushed the “yelp” horn button.

“Sometimes you can only get one,” he said, as the rear car braked and the rest of of the group scurried away. The traffic stop turned up a commuter on his way home from work, driving his wife’s car so he didn’t have the insurance slip. But everything else checked out and the man was delighted to be let go with a warning instead of a ticket.

The next driver was less happy to be stopped: a scoutmaster with a troop of kids returning from an outing at Everton. Covato followed the van around the corner from Main Street to Mill Street before pulling him over. The problem was an insecure load of dog sleighs loosely strapped atop the trailer. After cinching the straps tighter, the grumbling scoutmaster also got a handshake instead of a citation.

From there, a call on the computer about snowmobilers on the green space north of Fairy Lake, took us to Elizabeth Street to find one hapless sledder, helmet-less on the edge of the road.

“He said he wasn’t the one ripping around,” Covato confided. “We’re just going to check his drivers licence and make sure he’s a licenced driver. He lives just down the street here, so we’re going to make sure he drives slowly and gets home safely,” said Covato. “What’s better, giving him a bunch of tickets or having an honest conversation with him about what’s going on?

Indeed, Covato is as much an ambassador for the Halton Police as anything else. During the evening several people waved from the sidewalk. “It’s a real pleasure to work up here. We have a great relationship with the public.” he said.

Covato’s mobile work station (think of a heavy-duty lap top), linked up with dispatch and the CPIC system, didn’t stop “pinging” for most of the night. Calls from dispatch indicated, among others, an on-going domestic dispute in G-Town, a suicide threat, and even a violent bank robbery in Milton that drew a couple of north Halton squad cars from our area down south to conduct witness interviews.

But the roads around Acton were surprisingly quiet despite the bad weather. Driving eastward on Queen Street, Covato spotted a set of tail lights buried in the ditch in front of the Acton Arena. A couple of young women were huddled inside the car with the engine shut off.

“You guys all good? You guys okay?” he asked. They had been on their way to Guelph when they hit an icy patch and spun into the ditch. Covato got them to warm up in the back of the squad car, and gave them a lift to MacDonalds to await a tow.

No charges in this case, either. “You’ve got to use your discretion”, Covato pondered after dropping them off. “The snow is falling, the road conditions are poor, she’s got winter tires on, and I don’t smell any alcohol. My concern is more to make sure she is safe and that we can prevent any further loss of control here.”

Constable Covato kept his vehicle moving most of the night, punching up licence plates, checking abandoned cars and cul-de-sacs, dividing his time between residential developments, industrial parks and rural concession roads This is what he calls “pro-active policing,” looking for signs of suspicious activity, with a focus on preventing or intercepting criminal intent.

“I do love my job,” added Covato at the end of his shift. “We’re rooted in community policing, so it’s great when the community reaches out to us.”