“Perpetuation” and “inter-relation” are my two primary takeaways from the American Transportation Research Institute’s annual survey, Critical Issues in the Trucking Industry – 2020.

This means the issues that are perpetually present need addressed, and those inter-related require an overarching perspective. 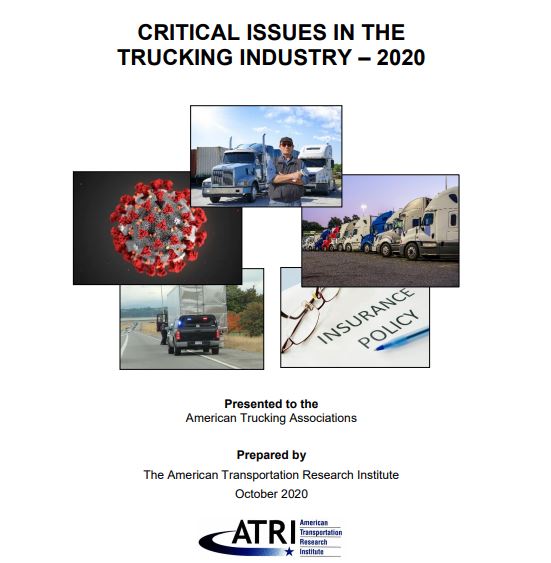 Begun in 2005, ATRI surveys the trucking industry to take its pulse on the critical issues.  The survey is open to all stakeholders with three-quarters of the responses coming from motor carriers and drivers.  ATRI does an overall ranking of the returns and then breaks them down by top issues.

For a perspective of the timing of the results, note that this year’s survey was taken from early September 2020 to mid-October. This year had the largest responses ever.

Key point — this is not just a list of annual gripes.  With each identified issue are three strategies to address them.

You can view the report here. Full disclosure — I am on the ATRI Research Advisory Committee.

In reviewing the results, my first reaction is the perpetuation of the key issues from year-to-year.  For the fourth year in a row, driver shortage leads the list.  As such, it begs for a comprehensive and effective effort to address it.

For example, a perennial list-topping issue was hours-of-service (HoS).  From 2011-19, HoS was either first or second.  This year, with the Federal Motor Carrier Safety Administration’s final rule coming into force in late September, the issue dropped to 10th place.

Absent another reason, that revision appears to have addressed HoS concerns to some degree, albeit not totally.  The proposed strategies focus on analyzing the impact of two of the recent changes (sleeper berth and short haul exception).

This is what is need to address the perpetual “leaders” of critical issues. We’ve identified them, and identified them again. And again. Great.  Let’s do something.

Driver shortage is not only the perpetual list-topper, but is a product of a number of other Top 10 items that are perpetually present.  It is this inter-relationship that must be considered in acting to address the issues.

The ongoing challenge of driver shortage has been, according to the study, exacerbated this year by the reductions resulting from disqualifications by the Drug and Alcohol Clearinghouse and withdrawal of older drivers due to Covid-19.

But if we go down the list, we see other issues that impact, if not drive, the shortage.  Those other items?  Driver compensation (#2), truck parking (#3), driver retention (#4), and detention/delay (#9).

OK, but this only gets you so far for a finite, non-increasing pool of drivers.  You end up like we used to say about the Italian government in the 1980s, the same people, just different offices.

That takes us to “supply” related issues.  Suggested strategies in the study include attracting younger drivers and expanding recruitment of women and minorities to increase the pool.

However, the productivity of even a static population of drivers can be increased by the meaningful action as to truck parking (#3) and detention/delay (#9).  And for good measure, let’s throw in a perpetual Top 10 that dropped to #12 this year—infrastructure/congestion.

These three issues hemorrhage productivity from the available driver force.  Restrained by HoS rules, each non-productive hour exacerbates the shortage.

ATRI’s truck parking survey of several years ago documented the time lost to the need to pull in early or not have a place to park.  Its GPS monitoring program demonstrated during Covid-19 the increased productivity absent congestion.

And does anyone really need proof of lost time due to detention/delays?  For those do, ELD data will fit the bill.

In addition to action on these items, we need to educate those in power that one change in trucking laws or regulations can have an impact on other aspects.  It’s like legal Jenga.

As a board member of the Pennsylvania Motor Truck Association, I joined their call on Washington a couple years ago.  It was a revelation to the congressmen I spoke with that if you ratchet up hours-of-service, you further exacerbate the truck parking crisis. What a concept!

Another area of inter-relationships in the ATRI Top 10 is insurance cost/availability (#5) and tort reform (#7).  Again, hand-in-hand.

Loss driven insurance premiums require tort reform for reduction. ATRI’s recent nuclear verdict study documents the fallout beyond those at the epicenter of such judgements, rippling in the form of increased rates throughout the industry.

Beyond that, trucking companies are suffering a “death by paper cut” of the proliferating claims, regardless of their merit, merely because it involves a truck.  Their units are seen as “18-wheel ATM machines”. The evidence is on the billboards of advertising attorneys throughout the country.

We have seen other industries address it. The best example is medical practitioners and the reforms they achieved as to malpractice suits.  Surely an industry of our size can bring to bear its efforts, born of financial necessity.

We need to focus on the perpetually present issues and do so by addressing the inter-related components.  Focus on truck parking, delay/detention and infrastructure to increase the available productive driver time. Promote tort reform to bring insurance costs in line.

I know, not as easy as it sounds. But what’s the alternative?

Doug Marcello is a transportation attorney who has earned his CDL. His law practices focuses upon serving the trucking industry. Based in Central Pennsylvania, he has represented trucking companies in cases throughout the US, having been specially admitted in 35 states. He is a frequent speaker at industry events and driver safety meetings. He has also written numerous articles concerning issues confronting the industry and has produced several DVDs relating to accident response and aggressive defense of claims.