Volvo has been mighty busy of late. Back in late April it chose our very own Expocam truck show in Montreal to unveil its new and long overdue VNR regional tractor. Promoted as the “shape of trucks to come,” it was joined this week by another much updated truck, the long-haul VNL, replete with all manner of safety technology as standard equipment.

Not content to stop there, Volvo set the VNL press launch against the backdrop of a new customer center at its New River Valley plant.

Part of a broader US$38.1-million manufacturing investment there in Dublin, Virginia, the facility covers 36,000 sq ft, and features a product showroom, two exhibit rooms, a pair of pilot review rooms, and a central theater with an 82-ft turntable.

Customers can also take trucks up to highway speeds on a 1.1-mile track with banked corners, varying surfaces, and actual grades.

Looked at from above, the structure even takes the shape of a Volvo logo, officially known as the iron mark. Cool.

Many design elements are clearly shared with the VNR, although other features are also specific to the needs of long-haulers.

One clear Swedish influence is the use of the Globetrotter name for the premium sleeper package, a name that’s been used in Europe since Volvo introduced a raised-roof sleeper there in 1979. Here, the VNL 760 and VNL 860 Globetrotters will come with a full aerodynamic package, polished wheels, high-end seating, as well as a refrigerator, inverter, and parking cooler package.

Funny story… driving a ‘real’ and very tall Globetrotter cabover many years ago, I got hopelessly lost in downtown Helsinki. It was a trip that saw 14 international journalists drive seven different Volvo tractors (with loaded trailers attached) from Stockholm to the Finnish capitol, up across the Arctic Circle and south again over the course of five days. As we approached Helsinki my navigator/co-driver missed a highway exit that would have taken us to our rendezvous point outside the city. And then suddenly I was in the middle of things with dense traffic and skinny streets and no idea how to get out. No GPS in those days, no cell phone, not even a map, but obviously I made it eventually, and only an hour late, largely thanks to COE maneuverability. Much sweat was dripped in the process, as you might imagine. But I digress…

IMPROVEMENTS OVER THE OLD VNL include a new hood along with better air deflectors and cab fairings that guide air around the cab, while redesigned chassis fairings take care of the flow around the drive wheels. Collectively, the aerodynamic upgrades are said to boost fuel economy by about 1%. 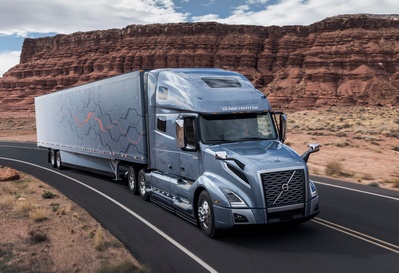 The headlamps are pretty innovative. Incorporating LEDs, a fan draws heat from the lamp in hot conditions and reverses the air flow in the cold to prevent fogging.

Open the big doors and you see the new dashboard with a five-inch color display in the midst of the gauge cluster. An optional infotainment system to be released in 2018 features a seven-inch color touch screen that can deliver navigation support, the images from a back-up camera and much more.

The new leather-wrapped smart steering wheel essentially becomes the command center for many of the electronic functions – it has 21 buttons within thumbs’ reach — and sits atop the air-assisted, infinitely adjustable steering column. Even the face of the steering wheel itself can be tilted 20 degrees to find the best position for comfort and view of controls. Seven seat options come from National or Sears.

Back in the sleeper, among other unique features, is a reclining bunk that Volvo notes is a first for North America. HVAC and audio functions can all be controlled from a redesigned sleeper control panel, from which drivers can also lock their doors or activate panic alarms. Available working surfaces include an optional tray that folds out of the rear wall, and a dinette.

THE VNL COMES STANDARD with the 13-liter Volvo D13 engine, while daycab and VNL 400 models also offer the 11-liter D11. The 15-liter Cummins X15 is available.

Another option is the turbo-compounding Volvo D13 TC engine, which recovers waste heat that would otherwise be lost through the exhaust, feeding an extra 50 hp back to the crankshaft and improving fuel economy.

The entire series of trucks comes standard with the I-Shift automated manual transmission.

Volvo power can now be found under the hood of 92.5% of trucks that roll off the Virginia assembly line, incidentally, and the I-Shift has a 90.2% share of new build.

BOTH PASSIVE AND ACTIVE SAFETY SYSTEMS are very much part of the VNL story. All models, and same with the VNR, include standard Volvo Active Driver Assist by Bendix — which combines a camera, radar, forward collision mitigation warnings, and active braking. The system will detect metallic objects such as slow or stationary vehicles ahead of the truck, and if something is spotted, drivers are warned three seconds before impact. First a red light is reflected on the windshield. If the driver doesn’t take any action at speeds above 24 km/h, brakes are automatically engaged.

The truck comes with a driver’s side air bag but it’s also available with a new RollTek side air bag – something originally developed for emergency vehicles with a high center of gravity. If a crash occurs, the seatbelt tightens, the seat drops, and air bag deploys within .25 seconds.

SPEAKING OF STANDARD EQUIPMENT, I was pleased by Navistar’s recent announcement that air disc brakes are now standard on all axles for all models of the International LT series. This is forward thinking. 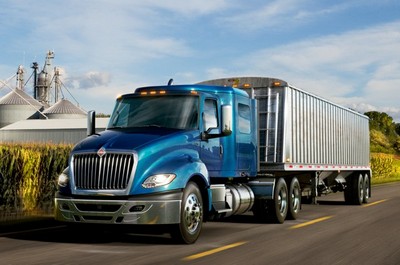 Available in 6×4, 6×2, and 4×2 configurations, LT-series trucks fitted with Bendix ADB22X brakes are now available for order.

International is the first North American truck OEM to make air brakes standard equipment on all axles of a long-haul tractor, the company notes.

ARE YOU GOING TO ATLANTA in September? You should, because that’s the venue for the inaugural North American Commercial Vehicle (NACV) show, September 25-28, at the Georgia World Congress Center.

NACV is a new concept for North America, though it’s actually inspired by and to some extent modeled after the huge IAA show in Hannover, Germany. The idea is to bring the entire commercial vehicle industry together with fleet decision makers and influencers. This is not a show aimed at drivers and owner-operators.

All leading truck and trailer manufacturers and commercial vehicle parts & components makers and suppliers will be there, including many from Europe.

Among major truck OEMs, Kenworth and Peterbilt are alone in not having opted to join the show but will be well represented by dealers. The show’s exhibit space is 98% sold out.

Things get underway on Monday, September 25, for attendees who have received an invitation from one of the show’s exhibitors. It’s then open to all fleet decision makers from Tuesday the 26th to Thursday the 28th.

The show is organized and produced jointly by Hannover Fairs USA (the American arm of the outfit that puts on the IAA extravaganza) and Newcom Media USA, which is a subsidiary of the company I helped launch way back in 1987. We also run the Truck World and Expocam shows in Canada. The two shows — IAA and NACV — will run in alternating years, incidentally.

You can register for the show here, and find hotel accommodations here.

AND IN CASE YOU NEED justification to attend NACV, consider that it will be a great place to learn everything you need to know about the American roll-out of electronic logging devices (ELDs).

The show will be one of the stops for the U.S. Department of Transportation’s Federal Motor Carrier Safety Administration’s (FMCSA) travelling ELD road show; a public education and outreach campaign geared towards helping truck drivers transition to ELDs.

All carriers subject to the ELD rule must convert from paper logs or logging software to a registered ELD if they don’t have an Automatic On-Board Recording Device (AOBRD) by December 18, 2017.

There are five other FMCSA ELD tour dates in the U.S. this year.

For more information about electronic logging, devices, including the ELD rule, frequently asked questions, and other resources, go here. 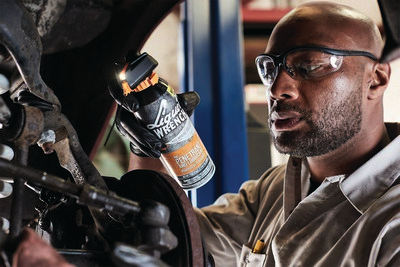 Mechanics, professional and otherwise, have been using Liquid Wrench penetrant and lubricant for a long time, myself included. It’s just kind of always there in the toolbox. But now you can get it with FlashSight LED technology.

This first-of-its-kind product features a built-in LED light located directly above the spray nozzle, which lets you see where you’re spraying and improve your aim in low-light areas.

Liquid Wrench offers a “pro-grade” anti-seize formula and it’s said to be safe on metal, painted surfaces, plastic, and rubber. It breaks down rust, cuts through grease, and offers corrosion protection as well.

THIS NEWSLETTER IS PUBLISHED every two weeks. For the most part it’s a heads-up notice about what’s going on with trucking technology. I also write here about interesting products that may not have had the ‘air play’ they deserved within the last few months, and maybe about issues that warrant attention in my occasionally humble opinion.

I should remind you that, with the odd exception, I don’t endorse any of the products I write about in this e-newsletter, nor do I have the resources to test them except on rare occasions. What you’re getting is reasonably well educated opinion based on more than 38 years in trucking.

If you have comments of whatever sort about The Lockwood Report, or maybe you’ve tried a gizmo I should know about, please contact me at rolf@newcom.ca