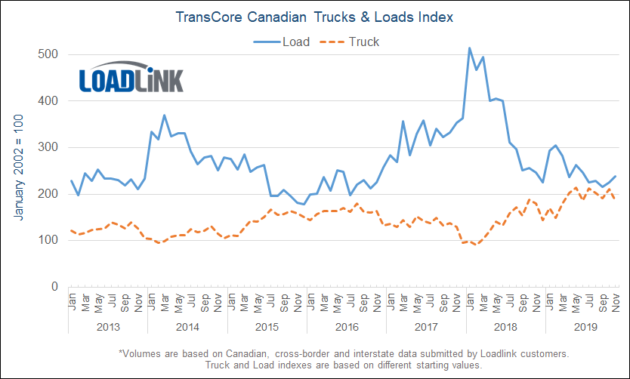 TORONTO, Ont. – Loads were up and truck availability was down on Canada’s spot market in November, according to data from TransCore Link Logistics.

The company says loads got a lift from the holiday shopping season, and that the Toronto and Montreal markets were particularly strong. Average daily load postings on Loadlink increased 11% from October, and were just 3% below November 2018 levels.

Inbound loads from the U.S. were up 14%, while intra-Canada loads climbed 6%.

“The increase in inbound cross-border loads could have been a result of brokers pulling freight forward to utilize available capacity prior to the American Thanksgiving weekend when capacity contracts due to less available drivers,” TransCore said in a release. “The workers’ strike from a large national rail service provider in Canada may have also released additional loads onto the Canadian spot market for the short duration of the striking period.”

Improved intra-Canada performance was attributed to the Toronto and Montreal markets. There were 18% more loads originating from Quebec and 20% more loads destined for Ontario. The Toronto-Montreal lanes saw an average monthly increase in load volumes of 116%. There was also strength in Western Canada, with Winnipeg-Saskatoon volumes up 98%, and Calgary-Kelowna up 108%.

“This may continue into the second week of December during the Christmas shopping season,” the company suggested. 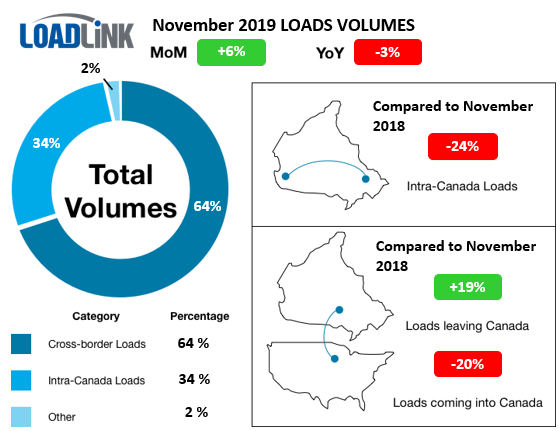