TORONTO, Ont. – Cross-border volumes between Canada and the US dropped 8% in October compared to the month prior, but up the same percent year-over-year, according to TransCore Link Logistics.

Intra-Canadian load volumes represent 28% of the total volumes and increased by 10% compared to October 2015, while cross-border loads average 66% of the total data submitted by Canadian-based customers, which were higher compared to last year.

Volumes leaving Canada were up 5% and those entering the country increased by 6% year-over-year.

Equipment capacity tightened, continuing its downward trend in October, dropping by 1% month-over-month and 2% year-over-year. Truck-to-load ratios were also down 10% from last year, but up 7% compared to September. 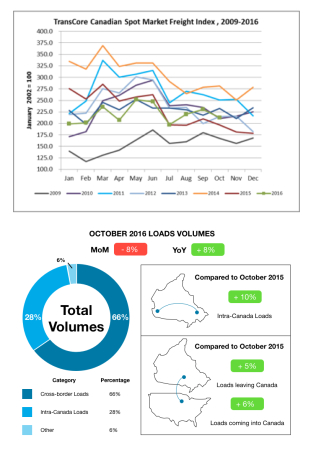