TORONTO, Ont. – The Canadian spot market was largely flat in November, according to TransCore Link Logistics.

Load and truck availability were relatively even. Loads increased prior to Black Friday, but dropped sharply just prior to the start of the shopping spree as most last-minute loads were tendered by then. November ended with a strong performance as winter festivities and holidays provided some additional freight.

Equipment postings also fell 5% from October, but were up 38% year-over-year. There were 3.2 trucks available for each load, compared to 3.22 in October. Year-over-year, however, the truck-to-load ratio climbed 99% from 1.61 last November. 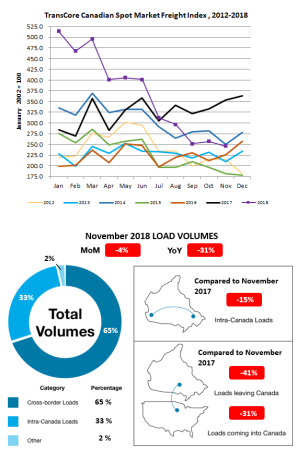