TORONTO, Ont. – Canadian spot market load volumes through the first half of 2018 were up 43% over the same six months in 2017, according to TransCore Link Logistics’ Freight Index.

They were also 33% stronger than the second half of 2017, reflecting historically high load volumes, which is also attracting more capacity.

TransCore reports Q2 load volumes were 18% lower than the record-breaking first quarter, but up 24% compared to the second quarter of 2017. The index was flat in June, but 12% higher than in June 2017.

Capacity increased 35% in the second quarter, compared to Q1. The truck-to-load ratio decreased slightly in June, with 1.45 trucks posted per load. Capacity remains tighter than it was a year ago, when 1.75 trucks were available for every load. 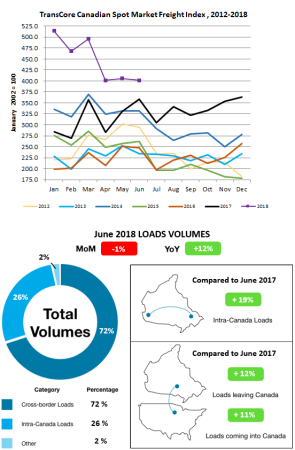