MAGDEBURG, Germany — Driving a truck will be a completely different experience by 2025, one that more resembles the piloting of a commercial airliner.

That’s the prediction of Daimler Trucks, which today demonstrated its first autonomous truck, which drives itself much of the time, allowing the driver to pivot his seat 45 degrees, creating a comfortable office environment from which to work. From this position, the driver can work on his computer, Skype with his family, socialize with other drivers and even reserve parking spaces at truck stops. The demonstration took place in front of nearly 300 truck journalists from around the world, on a recently constructed stretch of Autobahn near Magdeburg. 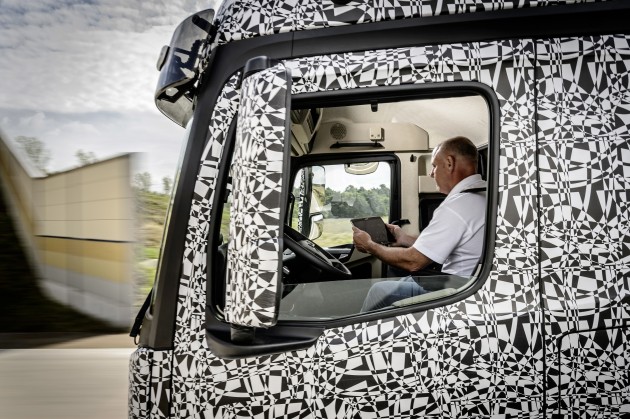 “The truck of the future is a Mercedes-Benz that drives itself,” declared Dr. Wolfgang Bernhard, the Daimler board member responsible for trucks and buses.

The truck used in the demonstration was dubbed the Mercedes-Benz Future Truck 2025 and the autonomous driving system was referred to as the Highway Pilot. While the system could be production-ready quite quickly, Daimler officials acknowledged a legislative framework must first be put into place to allow for the use of autonomously-driven commercial vehicles. The Vienna Convention on Road Transport, a treaty that oversees international road transport in Europe, has been amended to allow for the use of autonomous vehicles. However, each nation must follow suit to allow for their use.

The self-driving trucks can be operated on existing road infrastructure, provided lane markings are clearly visible. Daimler put the Future Truck 2025 through its paces, mimicking a number of real-world driving scenarios on a stretch of highway that has not yet been opened to the public.

The truck was able to respond to disabled vehicles parked on the shoulder of the road, to navigate stop-and-go traffic without driver intervention and to cruise at highway speeds of up to 85 km/h. Certain maneuvers require the driver to take over, including overtaking other vehicles. It’s expected at least 50% of the time an autonomous truck would operate without any driver involvement at all.

By taking over the more monotonous aspects of driving a truck, Daimler says the profession will attract more drivers, improve productivity and also enhance road safety. 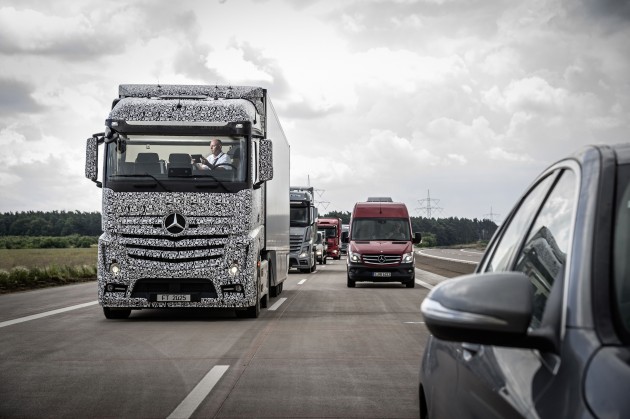 “The Future Truck 2025 is our response to the major challenges and opportunities associated with road freight transport in the future,” said Bernhard.

Daimler becomes the first truck maker to announce the development of what will be a commercially available autonomous truck.

While the concept of self-driving trucks may seem futuristic, fleet owners may not have to wait too long to acquire them, provided governments move quickly to allow their use.

“If the legislative framework for autonomous driving can be created quickly, the launch of the Highway Pilot is conceivable by the middle of the next decade,” Bernhard said. “That’s why Daimler Trucks is committed to maintain a dialogue with government officials and authorities, and with all other parties affected by this development. We believe the chances of success are good, because autonomous driving combines the ability to achieve business and technology objectives with the creation of benefits for society and the environment.”

It’s expected that autonomous trucks could improve fuel efficiency another 5% above today’s levels, as the trucks utilize technology to communicate with the infrastructure and other vehicles and adjust driving speeds and styles accordingly.

Many of the technologies that make up the Highway Pilot are already commercially available safety systems. These include automatic braking, stability control and lane-keeping assistance systems. Added to this suite is the new Predictive Powertrain Control (PPC), which uses GPS to analyze road topography ahead and adjusts the operation of the drivetrain to maximize fuel economy.

But drivers won’t be allowed to slip into the sleeper berth and nap while driving – a seat occupancy detector and other technologies will assure that. They can, however, use their seat time to perform other work duties that have traditionally been handled by office staff, such as invoicing, planning deliveries and arranging future loads. The technology has the potential to radically change the profession. The trucks are ready to roll. It’s now up to governments around the world to determine when the green flags will be waved.