CAMBRIDGE, Ont. – It was a busy day for members of the Central Ontario chapter of the Fleet Safety Council Feb. 14. They collectively dealt with a violent employee, the death of a senior executive, a serious crash involving an impaired truck driver, the breakout of a contagious illness, the complete destruction of a trucking company by tornado and a missing driver and load. All that before lunch.

Fleet safety reps were participating in the organization’s Code Red workshop, which worked through how to handle all the fictitious – but plausible – scenarios listed above.

“These look like exaggerated scenarios but they’re not, they’re real,” said Rick Gladman, risk representative with Old Republic Insurance, who participated on a panel at the event. 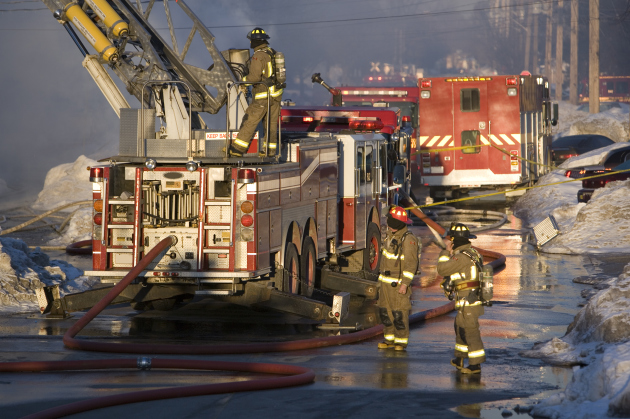 He also noted a plan should be in place to deal with all of those scenarios before they actually occur. “It’s very important every organization puts in place a risk management process,” he stressed.

Attendees at the meeting broke out into groups, each addressing one of the six Code Red scenarios provided by the Fleet Safety Council. Their responses to each incident were then openly discussed before the panel of experts weighed in with feedback and additional suggestions. The panel included Gladman, Bobbi Anderson of Labour Canada, Jerry Krauskopf, safety and compliance with Wayfreight Services and Mario Da Silva, corporate risk manager with Challenger Motor Freight.

Contagions in the workplace

The scenario involves the breakout of an infectious illness at a trucking company following a company potluck. Soon after the meal, half the employees are off sick. It harkened back the 2003 real-life breakout of SARS in the Toronto area.

Participants said in such an event they’d encourage office staff to work from home, schedule a deep cleaning of the office and vehicles, install hand sanitizers and educate employees on the virus.

“Within the key staff, everyone should have everybody else’s cell numbers,” added Krauskopf.

Da Silva added the company has an obligation to immediately communicate what is happening to staff. He also said smaller carriers that experience such a situation should have partnerships in place with other carriers so they can offer uninterrupted service to their customers.

Anderson noted if the potluck that created the breakout was a company event, it needs to be reported to workplace safety agencies such as WSIB.

The second scenario involved the termination of a hostile employee who’d made threats to staff. After his dismissal, he turns up at the company demanding entry. All that stands between him and the rest of the staff is the receptionist.

Fleet Safety Council members said the police should be notified as soon as he arrives – maybe even earlier. The receptionist should already be trained on how to handle such a situation. A workplace violence and harassment policy is needed, so that employees understand the rules.

Da Silva said there should be a plan in place even before the employee is terminated.

“Once the threat occurs, get police involved,” he suggested. “Encourage staff not to deal with this individual. Update security and protocols. There was lots of warning there before the termination, so you could’ve prepared ahead of time.”

Krauskopf suggested taking steps to protect the receptionist, such as moving them away from the window.

Anderson added it’s a good idea to contact police if there’s any inclination at all that the terminated employee could respond violently. She also said to focus on the security of the building’s exterior – not just its interior.

Gladman said when designing buildings, ensure the receptionist has an escape route and isn’t going to be trapped if a violent employee shows up at the front door.

A missing driver and load

In a scenario that’s all too common in the trucking industry, a driver and high-value load have gone missing. The satellite shows the truck’s latest location as 32 kilometers off the Interstate.

Participants suggested checking the driver’s history of call-in compliance to see if the behavior is unusual. They also said to speak with those who last had contact with the driver to determine how he or she was feeling. Were they seemingly off their game?

Establish a timeline of the driver’s GPS locations, they suggested. Since they have the last known location of the truck, they suggested calling a local taxi company to visit the site to see if anything is amiss and to confirm the truck is still there. If none of that turns up the driver, call the family, participants said. If the driver hasn’t been in contact with family, it’s time to bring in the police.

“At some point, you have to have that cut-off time where you make the call to the police,” said Da Silva. “At some point, give yourself two to three hours where, if you don’t hear back from the driver, you need to call the family and get the police involved. If you have another unit in the area, you can have that unit dispatched out to see if you can find the driver.”

Krauskopf added Google Street View can be a useful tool to locate other trucking companies operating in the area, which may also be called on to check the immediate location for the truck and driver. He also suggested sending out missing driver alerts to industry associations.

Calls to the family shouldn’t come as a surprise to the driver. The steps and procedures that will be taken to locate a missing driver and/or load should be written into any driver policy handbook, so drivers know a call home is to be expected if they fail to respond to messages.

Destruction of a business

In this scenario, a tornado wipes out a large section of a town, including a small trucking company. Communications are down and there is chaos all around.

Fleet Safety Council members said they’d immediately try to contain any diesel spills while accounting for employees and contacting the insurance company and first responders. While that was happening, they’d notify customers of potential lost loads while working with local partners to complete the deliveries of undamaged loads.

Since satellite communications are down, participants said they’d reach out to the satellite provider directly to see if they can send out a message on their behalf to drivers who are on the road, updating them on the situation at home.

Da Silva added first responders would immediately be on the scene tending to injured people; property damage would be the second concern. He said managers should know who was working that shift and ensure they’re accounted for. He also noted getting back in business becomes a major challenge.

“Business continuity can make or break a company,” he said. “You can be out of business in six months to a year. You have to have a business continuity policy. Partner up with carriers to help establish that contact with customers. Communication is key to your staff and to your customers and you want to get on top of that.”

Gladman said it’s important to get the insurance company involved immediately. “Prompt reporting is the most significant thing,” he said.

Krauskopf offered a useful tip when fuel leaks occur: slide a mattress under the spill to contain as much of the diesel as possible and to reduce cleanup costs.

Death of a senior executive

A senior executive who controls most of the carrier’s policies, customer relationships and financial information has fallen overboard while on a dinner cruise with a client. Unbeknownst to staff, he’s one of several people under investigation for missing funds at the company. His body is retrieved and it quickly becomes clear he had way too much control in the operations of the company.

This scenario should never have occurred, participants noted, since it’s unhealthy to let one exec solely control so much of a business’s activities.

The company needs to quickly obtain all company documents and materials. It also needs to communicate the loss to employees and offer support. Key people need to immediately be assigned duties related to the day to day operations of the company.

“This executive had way too much control,” said Da Silva.

Because the death occurred on a business trip, Anderson said the feds need to be notified.

Even though the executive was under investigation, Gladman said employees need to be comforted and offered counseling. “Staff have lost an important part of the organization,” he said. “It’s important you communicate and provide employee assistance any time a loss occurs in an organization. Staff should be helped through this very traumatic event.”

On the bright side, quipped Da Silva, “If the money stops going missing, that answers your question.”

A serious collision involving your driver

While in Oklahoma, one of your company’s drivers is arrested for impaired driving. But not before he crashes the truck, disconnects it from the trailer and leads police on a low-speed bobtail chase on flat tires while leaking diesel fuel. Police arrest the driver and conduct a blood test confirming his intoxication.

Participants said to get the insurance adjusters on-site immediately to help with the investigation. They should be able to verify the tow company and HazMat cleanup crews that respond aren’t overcharging. But the insurance company’s responsibilities end with the property damage, since the driver was breaking the law, Gladman added.

“We are obligated to deal with the property damage aspect, but the driver is on his own,” he explained.

Da Silva said while the first instinct is to immediately terminate the driver, that’s the worst thing to do.

“When the driver comes back, get all your facts, get a copy of the police report and suspend them until further notice,” he said. “Once all the facts are in place, bring him in then and make that decision.”

The driver is likely to be a more cooperative witness if still employed by the company, Gladman added. “You want to keep him onside,” he said. “It’s important you don’t terminate him. Suspend him pending the investigation.”

Since local news outlets are likely to cover the incident, Da Silva said it’s important the carrier has clear rules in place as to who can speak on behalf of the company. Gladman agreed. “The last thing you want is a dispatcher responding to a media request at 2 a.m.,” he said, adding a company spokesman has about eight seconds to make a point, so keep any comments on target.

Da Silva said a written statement can be provided to media. Try to limit the number of times the company is mentioned by name, he added.

Be careful when signing tow and cleanup agreements, Da Silva added, as they can quickly skyrocket when no one from the company is on site to supervise.

“I’ve seen tow bills from $20,000 to $100,000,” he said. “If you’re calling someone off the Internet they’re going to want you to sign a contract that’s going to pay ‘any and all’ expenses. You may want to adjust the wording to ‘all reasonable and necessary costs’.”