OKOTOKS, Alta. – “Disappointing” and “messy” were a couple of the words Mullen Group CEO Murray Mullen used to describe the company’s first quarter, but he remains optimistic about the remainder of the year.

On a conference call with analysts April 26, Mullen described the first quarter as “a real challenge and disappointment for our organization.” 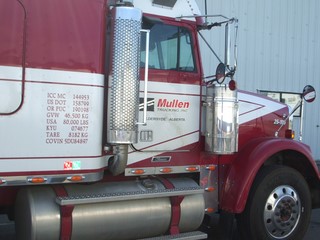 This was mostly because the oilfield services segment saw a decline in revenue. Drilling activity in Western Canada was down 8%, and pipeline projects remained mired in red tape. An extended winter also hindered activity in the oil and gas industry.

The trucking/logistics segment achieved record revenue, but Mullen admitted the company was slow to take advantage of a rising rate environment.

“We saw pricing gains in the spot market but were slow to implement pricing increases into the contract market,” Mullen said. “Pricing increases are an absolute requirement today.”

Trucking margins only improved by about 1%, Mullen said, despite the shortage of capacity.

“We have more work to do,” he said. “The spot market is an event – the rates move up and down. Contract pricing is a trend. It requires more collaboration with customers, but I can tell you the trend is up.”

Spot market rates were up about 20%, Mullen said, but he said that was largely due to the robustness of the U.S. economy.

“When they are busy, to be honest, they don’t come to Canada quite as often,” he said of thriving U.S.-based fleets. Mullen said the Canadian market has not seen the same level of success, but an opportunity is emerging.

“We are on the cusp of a tightening supply chain, driven by 10 years of easy money policy, creating millions of new jobs,” Mullen said. “We have a virtually full employment situation, the likes of which I have not seen in my career.”

Finding drivers as baby boomers retire will be a challenge for the company and the industry.

“The reality is the trucking industry is short of drivers at the same time the demographic is changing the workforce and the economy is at full employment,” Mullen said. “My firm belief is we have entered into a new era of rising prices for trucking and logistics. In the first quarter, we saw evidence of this in the spot market.”

Contract rates will go up through 2018, Mullen insisted, emphasizing all Mullen’s trucking businesses have been ordered to raise prices.

“All trucking segment business units have been instructed to increase rates,” he said, adding managers can either deal with upset customers, or an upset CEO. “Pick your poison.”

But with the lack of drivers, growth will have to come through acquisition.

“Without drivers, you can’t expand your business,” Mullen said. “This is why we consider acquisitions key.”

Mullen also believes a recovery in the oil and gas industry is underway, but it’s a tough market now, with customers under extreme cost pressures. Mullen speculated many competitors in the oilfield services segment are selling equipment to pay debt or leave the business, so Mullen Group will be well positioned to take advantage of an improving market.

“When demand increases, and it will as commodity prices improve, there will be virtually no service companies that have the cash to grow,” Mullen said.

He also spoke of MoveItOnline, Mullen Group’s online marketplace for matching carriers with loads. He said the platform has been given a new look, and has added nearly 300 carriers representing 20,000 trucks. It moved more than 1,000 loads in March.