TORONTO, Ont. — For Precision Specialized Division, it was just another day at the office. Asked to transport 212 loads – six of which were extra large smoothing reactors measuring 15 feet wide and more than 16 feet tall with each weighing 110,000 lbs – from Toronto to sites in Central Alberta, the company immediately went to work devising a plan.

After spending more than 130 hours conducting a feasibility study for the move, the province of Ontario – citing spring weight restrictions and construction in Northern Ontario – denied their permit, forcing Precision to become more imaginative. 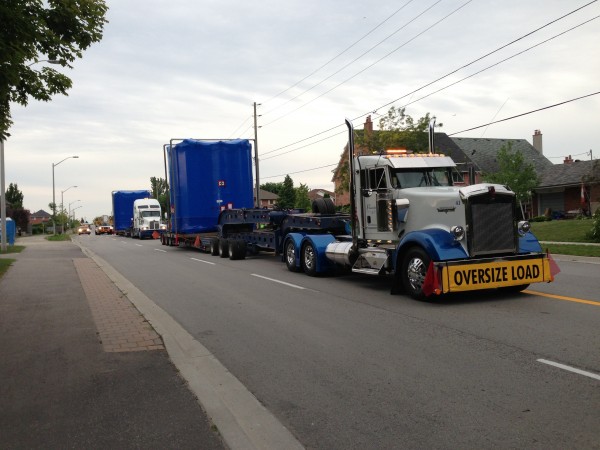 More than 400 hours of additional planning later, the company had come up with Plan B, and after executing it flawlessly, the move garnered Precision a global award for Hauling Job of the Year (under 160,000 lbs net) from the Specialized Carriers & Rigging Association (SCRA).

“In terms of the amount of loads, that part wasn’t abnormal,” Ed Bernard, vice-president with Precision told Truck News in an interview. “What was abnormal was, we’ve never been told no before. Nobody has ever said ‘No, you can’t go that way’.”

With a route through Northern Ontario out of the question, Precision examined options incorporating the Great Lakes. It settled on a route that saw it transport the reactors – 12 in total, including six slightly smaller ones – trucked from Toronto to the Port of Oshawa, where they were loaded onto a ship dubbed the Spliethoff Merwedegractht. Loading the reactors onto the ship took 11 hours. That vessel then transported the reactors over a five-day period across four Great Lakes, arriving at Duluth, Minn.

There, the reactors were loaded back onto trucks – six Kenworth and Freightliner tractors pulling six Aspen trailers – for the remaining 1,400 miles of the journey to their destination. The complete journey entailed 1,500 miles over the road and 1,600 nautical miles over the Great Lakes. A total of 580 man hours were required for each individual load, Bernard said.

“There was a lot of prep work that went into that,” Bernard said. “There are so many intertwined agencies.”

This was especially true where the convoy crossed into a new jurisdiction (ie. from Toronto to Durham Region) where one police force and utility would relinquish control to another.

“Everyone has to switch off,” Bernard recalled. “That was one of the major issues, which is why we moved on the weekends and very early in the mornings.”

The oversize loads attracted a lot of attention – especially in the smaller communities north of Oshawa.

The entire move was broken down into three phases. Phase 1 from Toronto to the Port of Oshawa required 60 dedicated personnel, including drivers, police officers, utility workers and Precision staff. Phase 2 consisted of loading the reactors onto the ship and sailing to Duluth. Phase 3 involved the last leg of the trip from Duluth to Alberta, using six trucks making two round trips each. While the 12 reactors were being trucked to Alberta, an additional 200 loads were also being delivered as part of the same contract.

The SCRA, a global organization for heavy-haulers and rigging companies, holds its Hauling Job of the Year competition each year, allowing member companies to present the details of their work during the group’s annual convention. The grand prize winners were announced at a gala dinner Apr. 18 in Carlsbad, Calif.

For Precision Specialized Division, winning the award for a second time was especially sweet, because no other Canadian company has done so, according to Bernard. It was also appreciated because Bernard says the organization is the well respected around the world.

“If you are a heavy-haul carrier or crane company or rigging company and you are not a member, you’re not in the know,” he said. “It’s the organization to belong to.” More info on the group and the award can be found at www.SCRAnet.org.