COLUMBUS, Ind. – ACT Research reports contract truckload rates fell to US$2.28 per mile in the third quarter, down 2% year-over-year.

In its ACT Freight Forecast, U.S. Rate and Volume Outlook, the industry forecaster suggested further declines are in store.

“We’re seeing evidence that a bottoming process is beginning in the truckload cycle from truck order and survey data,” said Tim Denoyer, ACT Research’s vice-president and senior analyst. “It will be gradual, but we think spot rates will turn positive in mid-2020. Meanwhile, for-hire freight volume continues to be soft, pressured by ongoing private fleet capacity additions, so we don’t think we’ve seen the worst of the contract rate pressure yet.”

He added, “We caution not to jump to the conclusion that capacity is tightening because of carrier failures. Those are not unusual in this business and the fact is U.S. fleets bought more new Class 8 tractors in September than any month in history. So, capacity is not yet tightening, and build plans are still above replacement for the next six months. Rather, roughly 10,000 net new tractors were added to U.S. highways in September, mainly by private fleets.”

At the same time, freight has softened due to tariffs imposed Sept. 1, as well as the strike at GM. 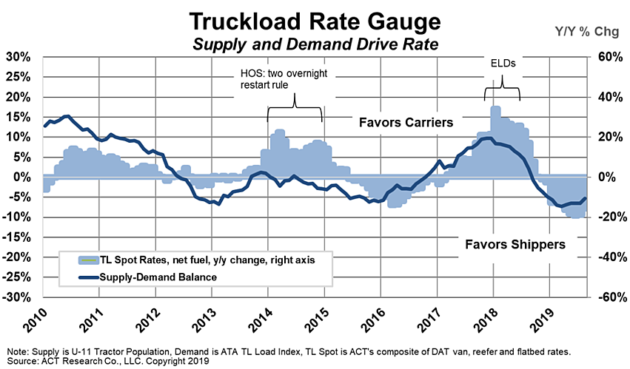