BLOOMINGTON, Ind. – U.S. shippers did not see any capacity or rate relief in April, according to the latest FTR Shippers Conditions Index, which reached a new low with a -13.4 reading.

But FTR says conditions for shippers may have bottomed, as year-over-year rate growth is close to its near-term peak. Shippers will likely see stabilization in 2019, FTR reports, as more capacity comes on line. However, the industry forecaster also says there is no expectation for lower rates until at least late 2019.

Total shipping costs are expected to rise an estimated 12% year-over-year in 2018, with another 5% increase expected in 2019.

“The spot market is producing record rates every few weeks, though this trend will soon hit its peak,” said Jonathan Starks, chief intelligence officer at FTR.

“Shippers facing significant increases in rates for truck and rail intermodal movements have not yet seen relief,” added Todd Tranausky, senior transportation analyst. “However, record truck orders should begin hitting the market in the second half of the year, and we are closely watching the driver situation, which will determine if shippers see improvements as the trucks become available.” 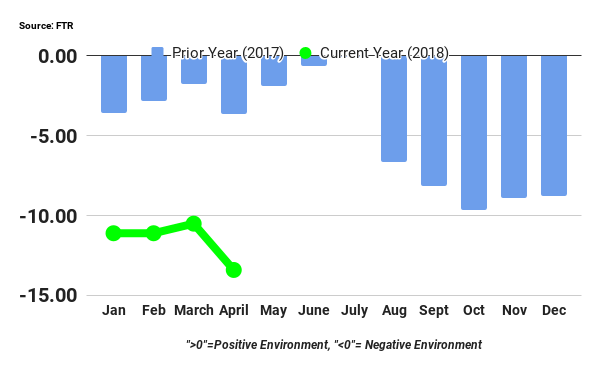