However, TransCore Link Logistics reports volumes remained higher than in prior years. Month-over-month, volumes were down 8%.

There were no obvious shifts in regional distribution of cross-border loads coming into Canada, TransCore noted. However, loads leaving Ontario decreased 10% and loads leaving Western Canada rose 17% compared to January.

Equipment postings on TransCore’s Link Logistics load board decreased 2% from January, but were up 16% year-over-year. The equipment-to-load ratio increased to 1.90 from 1.79 in January.

TransCore says outbound equipment availability is the same as it was in 2014 while inbound equipment postings have increased by more than 20%. TransCore’s Canadian Freight Index is taken from the company’s Loadlink load board, used by about 5,000 Canadian trucking companies. 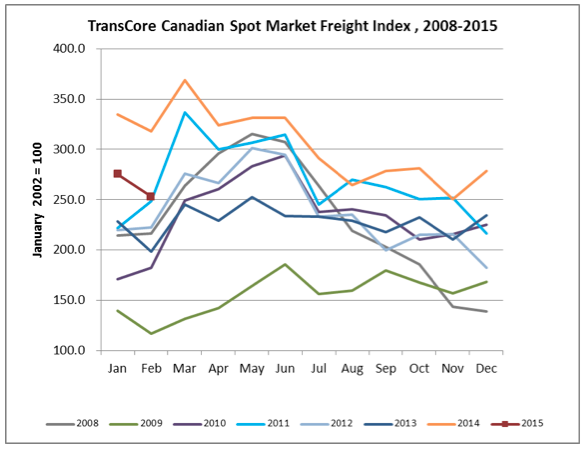