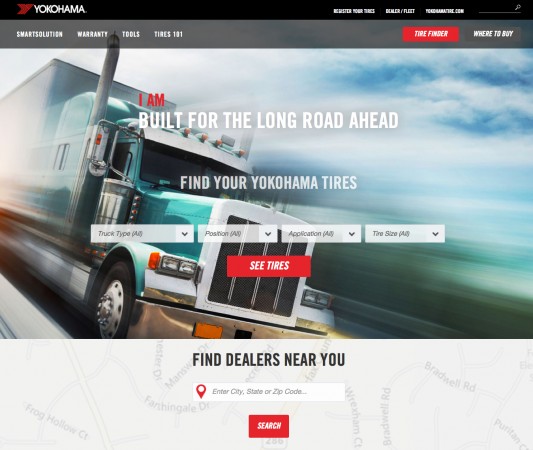 “YokohamaTruck.com has a lot more than just our full line of commercial tires on it,” said Rick Phillips, YTC vice president of sales. “It features several business-driven tools like the new Tire Inspection Guide that helps fleet customers identify the most common tire issues and fixes to keep their trucks on the road. The more we can help minimize down time, the more productive – and thus profitable – fleets can be.”

Yokohama is currently in Phase 1 of executing an aggressive growth strategy for the North American commercial market. It is opening a new Mississippi tire plant this fall that will produce one million tires per year. Phase 2 will involve the construction of another million tire plant in the US, however timing of the second phase will depend on market conditions, Phillips told Trucknews.com in an interview at the Mid-America Trucking Show.

“If the market keeps going like it’s going now, we’ll grow with it and initiate Phase 2 within the next couple years,” he said.

Once the second US plant is constructed, Yokohama will be able to serve 90% of the North American market domestically. But even construction of the first plant alone will help it better serve this market, Phillips said.

“Production in Mississippi is going to give us quicker time to market,” he explained. “Right now we have to order 45-60 days out and once we have domestic production, we’ll cut that time to about two weeks.”

Yokohama will be able to bring its tires to market more quickly in North America and will be able to adapt to changing market conditions faster once the plant is opened this fall. Some of the Canadian market will be served by the new Mississippi plant when production begins while the remainder will continue to be served via offshore production.

Bringing production to the US is part of Yokohama’s plans to double its commercial tire business within the next six years. The company also formed Yokohama Corporation North America, which brought the Canadian market together with the US under one organizational umbrella. Prior to that the Canadian division was run as a separate business unit. This move, according to Phillips, assisted with cross-border functionality between the two markets.