HAGERSTOWN, Md. — Mack Trucks has completed a long-term goal of consolidating all powertrain production at its Hagerstown, Md. plant.

Mack invested US$30 million into the plant to add the axle assembly line and necessary tooling. Mack also brought engineering to Hagerstown as well as a centralized aftermarket warehouse. The company added about 100 jobs in the process. 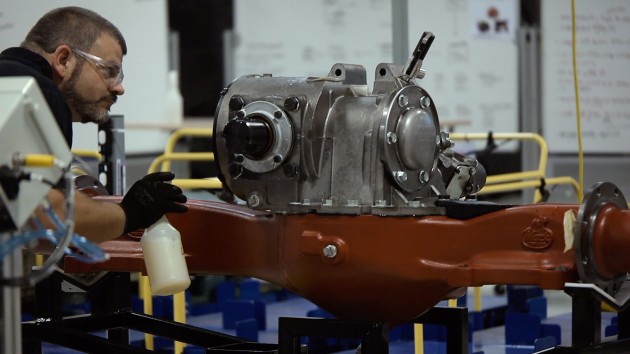 “This investment is very important for our customers, dealers and for Mack Trucks,” said Stephen Roy, president of Mack Trucks North America during an inauguration at the plant Tuesday. “It gives us the ability to oversee all critical aspects of the axle manufacturing process in one place. It also makes us less dependent on third-party suppliers. We know we can get what we need here in Hagerstown.”

“Integration is extremely important today, with EPA regulations and more constraints on fuel economy and more focus on performance,” he said, adding that building its own axles will allow seamless communication between the axles, engine and transmission.

“When all components are made by one manufacturer, they simply work better than if you have independent components,” Roy said. “There’s no guesswork involved.”

Mack claims to be shipping more trucks out the door with the gold bulldog on the hood, symbolizing a fully integrated powertrain with Mack engine, axles and transmission. This has been driven by its mDrive automated manual transmission, which Roy said is spec’d in about 70% of Mack highway tractors. With the mDrive HD brought on-board earlier this year, Roy said he expects the company to sell more gold bulldog-adorned vocational trucks, too.

While the contribution of the engine and transmission to fuel economy is obvious, Stu Russoli, highway and powertrain marketing manager with Mack, said the axles have an equally important role to play.

“A lot of it’s the rear ratios,” he explained. “Especially with downspeeding. As we tweak that more and control the rpm of the engine, we can look at the rear ratio and set everything up right through the path of the driveline, so the axles do play a big role in getting the best fuel economy.”

Mack has built some attributes into its drive axles that differentiate it from the field. Russoli said its spiral bevel gears with helical gear inside result in greater efficiency than industry-standard designs. And the power dividers are only active when required, reducing fuel consumption.

Mack drive axles are standard but third-party axles continue to be offered. Mack also offers steer axles but production of those is still outsourced.

Hundreds of Mack employees participated in the axle line inauguration at the Hagerstown powertrain plant on Tuesday. They were joined by Mack executives, members of the media and local politicians.

“Bringing axle production to Hagerstown allows us to oversee the manufacturing process – from design to assembly – and deliver the high-quality components our customers depend on,” Roy said. “Building Mack engines, transmissions and now axles under one roof also demonstrates our continued commitment to integrated powertrain design.”

“Everything has come back to Hagerstown – axles, engines, transmissions,” Russoli added. “The engineers design it here, test it here, we cut the gears here and assemble the axles here, so it’s born here and it’s born ready.”