DENTON, Texas — Peterbilt is feeling pretty good about its position in the marketplace – especially among large fleets – thanks to the success of its Model 579.

And now with the addition of the EPIQ package, the company says it has never been better positioned to sell to large fleets in the US and Canada. Three quarters of the trucks Peterbilt builds are now aerodynamic models.

“It has opened a whole new customer base for us,” Robert Woodall, assistant general manager, sales and marketing with Peterbilt, said during a press briefing at the company’s Denton truck plant.

Woodall said the EPIQ package is just now entering production and already fleets are making the transition, despite an upcharge he said is quickly recovered through fuel savings.

“Most of the interest in EPIQ is going to be the big fleet guys, those guys who are all about fuel economy,” Woodall said. “That’s where EPIQ is playing out.”

The 579 EPIQ can also be ordered with the Cummins-Eaton SmartAdvantage. However, both the SmartAdvantage and the Paccar/Eaton pairing (dubbed APEX) are limited to a GCWR of 80,000 lbs, meaning this package won’t fit all Canadian needs. For the Canadian customers, a 16-speed Eaton UltraShift Plus LSE will be available, rated at up to 110,000 lbs, but they won’t be calling that an EPIQ, even when all the other aspects of the package are spec’d. It might be EPIQ, but it’ll still be a fuel-efficient option for fleets seeking the versatility to haul heavier Canadian payloads.

Fleets running north-south with US-legal loads on the other hand, may be well served by the true EPIQ, straight out of the box.

The Model 579 itself is the result of an exhaustive design process.

Andrew Weiblen, director of product planning with Peterbilt, said the development process began by reaching out to customers to find out what they wanted in a truck. They visited truck stops with a mobile, adjustable cab and surveyed drivers on the ideal configuration. Most preferred a 2.1-metre cab width, which was adopted for the 579.

“A 2.1-metre cab is the perfect width to give drivers ample space, without making them feel like they’re driving an RV down the road,” Weiblen said.

Determining the market needs was the first in a five-step design process. Next came: ideation; concept; validation; and final design.

As part of the ideation process, designers studied how customers use the truck. When they noted some were placing their cell phones in the cupholder, a special phone-sized storage slot was developed.

The concept stage included the building of prototypes. Clay models were built in 20%, 40% and full-sized scale. Next, as part of the validation process, full-sized functioning prototypes were built and rollover and frontal impact testing was conducted. Peterbilt wanted to ensure the truck would last a million miles or more. The 579 is the foundation from which all other models – including vocational and severe-service trucks – are built, so it had to be constructed tougher than required for the on-highway linehaul applications it was intended for.

The arrival of the 579 also necessitated a redesign of the production plant. About 55,000 sq.-ft. of floor space had to be reconfigured to accommodate the new production flow. A new robotic chassis paint system was installed as well as a non-contact laser alignment system, which Peterbilt said is the only one of its kind among truck manufacturers. The company is particularly proud of this piece of equipment. It ensures trucks are delivered to dealers and customers in alignment and reduces the need for fleets to align new trucks when they’ve arrived.

The Model 579 drew inspiration from the Peterbilt/Cummins SuperTruck project. The chassis fairings and predictive cruise technology are a couple of the 579’s features that were first developed as part of the SuperTruck.

Peterbilt also showcased some of its new and future technologies during a demonstration at Texas Motor Speedway. Trucknews.com will have more on those soon. In the meantime, you can find a full review of the Peterbilt 579 EPIQ here. 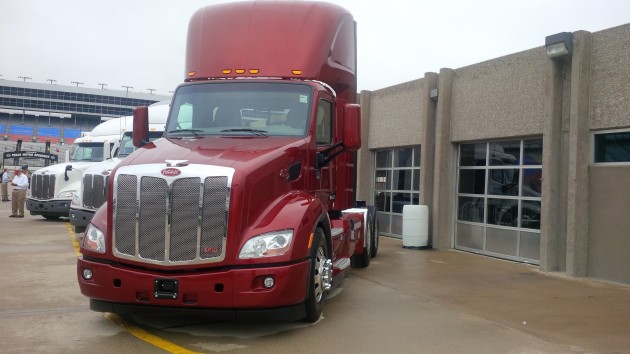