Magnus Koeck, vice-president, marketing and brand management, said the company has been pleasantly surprised by demand for VNR 640s with 61-inch sleeper.

“The VNR has been very well received by the market,” he said. “The large sleeper has far exceeded our expectations.”

Speaking to the overall Class 8 truck market, Koeck said the linehaul segment is down, regional is flat, but construction is strong and growing. This mix has taken a small toll on Volvo’s North American market share, since its strength is in on-highway and regional haul applications. The new VNR, Koeck said, will help Volvo recover some of the share it has lost.

“The VNR has seen great order intake in the first month,” he said.

In March 2016, 47% of Class 8 truck orders were for linehaul applications. That shrunk to just 41.2% in March 2017, with construction demand picking up share.

“The construction sector has grown, and we will continue to see that into next year,” Koeck noted. “Just the shift of the market effects our market share a little negatively, but on the other hand it’s positive for our sister company Mack, which is strong in that segment.”

“Seeing the order intake (of the first few months of 2017), we are confident we will regain some of this going into the second half of the year, so we are pretty confident for the future,” Koeck said.

Volvo continues to grow the penetration of its proprietary engines and transmissions in its trucks. Today, 92.5% of Volvo trucks are ordered with Volvo power, and 90.2% with the I-Shift automated manual transmission.

In other trends, Koeck noted the industry’s inventory-sales ratio has corrected to more normal levels. He also said interest in natural gas has waned. And demand is beginning to return to the oil and gas industry, Koeck said.

The expansion of the Panama Canal is also beginning to shift transport patterns in the US, allowing mega-container ships from China to unload on US East Coast ports instead of the West Coast. Koeck said Volvo is also watching with interest as container traffic and intermodal volumes grow, and the has also noticed the formation of new partnerships and the expansion of LTL carriers in the US and Canada. 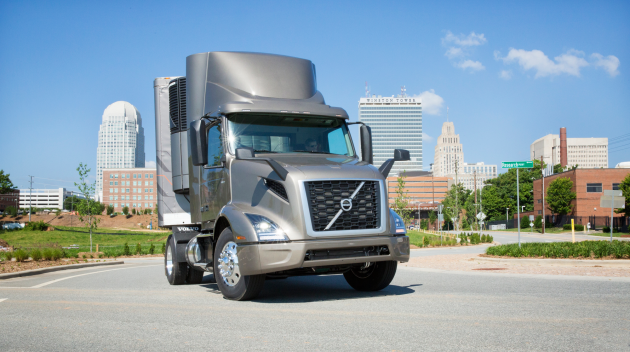