LAURENS, S.C. — Western Star, known around the world as the brand behind Optimus Prime in the Hollywood blockbuster Transformers, has brought the concept to life through a new truck that can be converted – in minutes and without tools – into a completely different vehicle. 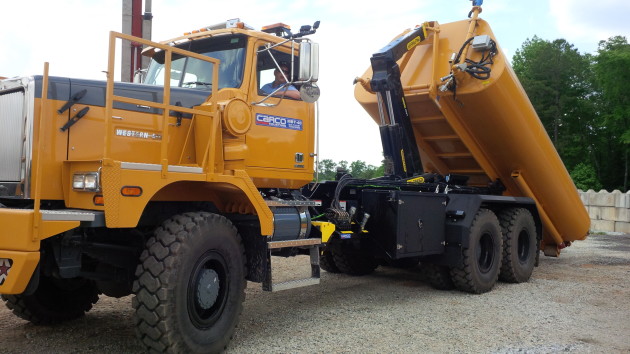 The new MBT-40 is built on the Western Star 6900 chassis configured for off-road applications. MBT stands for Multi-Body Transformer, for its ability to quickly change from one vocation to another.

Western Star demonstrated the concept for the first time at Michelin’s Laurens Proving Grounds this week. A fully functional water truck was converted into a dump truck in just eight minutes. The conversion was performed by the driver without assistance or the need for any tools.

A Palfinger G68 hooklift rose from the chassis and removed the tank body from the truck, setting it on the ground. The same hooklift was then attached to a nearby dump body, which was then lifted and secured into place. From water truck to dump truck in eight minutes.

“You can drive to any road and see a water truck sitting there,” said John Tomlinson, XD and vocational sales manager, Western Star. “It’s a chassis he’s paid $700,000 for and it’s sitting on the road doing nothing. Now I can water in the afternoon and dump all morning and it’s quicker to change that than it is to fuel a truck up.” 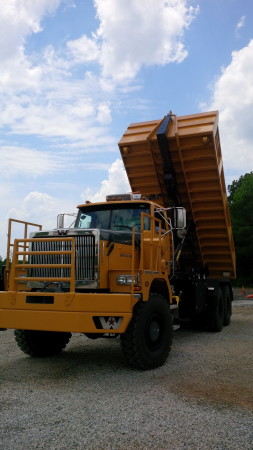 In just eight minutes, the truck was converted to a dump truck.

Western Star is working with a variety of body builders to add applications to the mix. It can also convert the truck to a flatdeck and soon more options, including crane and vacuum trucks will be possible.

“We’ll supply the cab to any body builder that wants to play with us and they’ll make equipment for it,” Tomlinson said. “A construction company with a couple pieces of equipment can move dirt a lot faster, and can do things quicker with just a change of thinking.”

Tomlinson said body builders are excited about the concept and lining up to have their bodies integrated. The controls inside the cab are used to control each body type. Bodies are typically less expensive because the hydraulics are built into the truck chassis.

It can even be converted from a truck to tractor, with the addition of a dump trailer with integrated fifth wheel.

The MBT-40 is less expensive than traditional off-road machines as well as being more versatile, Tomlinson pointed out. Carco Industries worked with Western Star to integrate the hook lift and various bodies.

“The MBT-40 package is a game changer in construction applications for its ability to be multiple pieces of equipment in one chassis,” said Tomlinson. “The development of this platform was all about finding better economic ways of filling needs for our customers. Off-road chassis equipment can be expensive to buy and maintain and new emissions levels are making the investment even more costly.”

Also new is an Extreme Duty (XD) off-road package that simplifies the ordering process for customers and dealers. It consists of a standard set of specifications to fit most job requirements. It can be built on the 4900 and 6900 chassis.

Spec’s include rugged hood and fenders, slipper springs on the front suspension, Allison transmission and availability of on- and off-road engines. Tomlinson said the XD trucks will offer lower maintenance costs and improved parts availability and a perfect option for customers that tend to over-spec’ their off-road equipment.

“If you have a very expensive piece of equipment and 95% of the time you’re doing conventional hauling, we have a solution for that and it’s much cheaper to run and buy,” Tomlinson said, adding the XD machines can be bought for as much as $100,000 less than articulated Cat and Volvo machines often found in such applications. 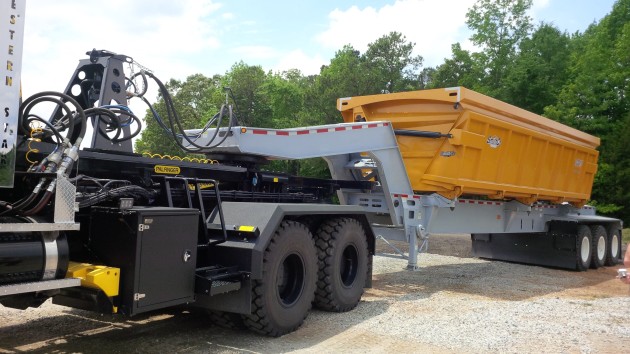 A side-dump trailer with integrated fifth wheel converts the MBT-40 into a tractor.