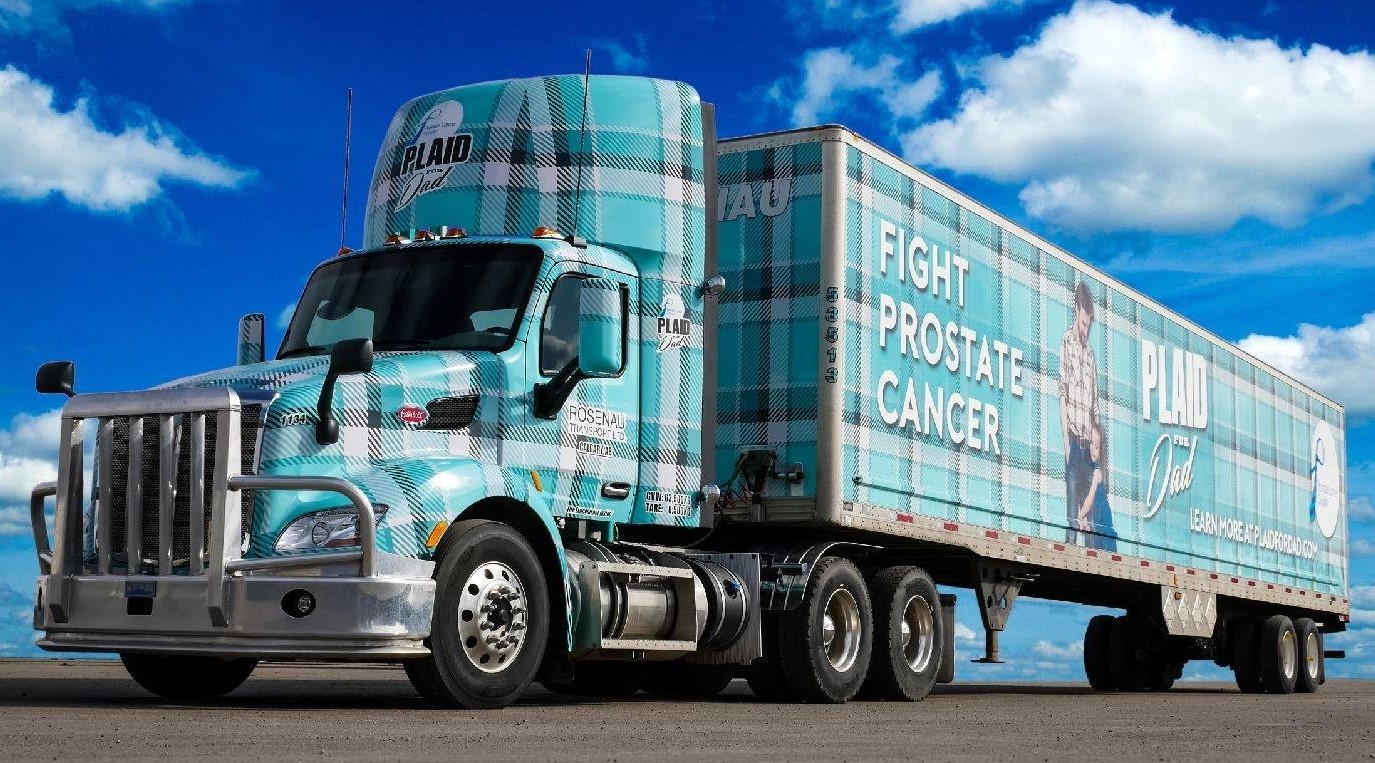 Mobile advertising has come a long way since “Hershey’s Cocoa” was emblazoned on a Riker Electric Vehicle owned by the American chocolate pioneer Milton Hershey in 1900.

It all began with painting, followed by hand-cutting, die-cutting, laser-cutting and screen printing before reaching digital production, but the technology is still evolving.

The global vehicle graphics industry is now worth billions of dollars and growing at a fast pace. Companies such as 3M, Avery Dennison, Hexis, Orafol and Ritrama are some of the major players in the adhesive film market.

“The global automotive wrap films market size was valued at US$2.87 billion in 2018 and is anticipated to progress at a compounded annual growth rate of 22.2% from 2019 to 2025,” U.S. consulting firm Grand View Research said in a report released in April.

So, what’s behind this spectacular growth? The answer is simple, according to 3M, a leader in North America.

A recent survey conducted by the company in the U.S. revealed that fleet graphics attract much more attention than traditional advertising. Each of the 10 Snapple trucks used in the three-month 3M study generated six million daily views on average. Even better, the cost per 1,000 impressions was just 48 cents, while other options cost between $3.56 and $23.70 for the same number of impressions.

The company estimates that more than 100,000 trucks are wrapped every year in North America.

“The way I look at it is, everything that is blank is an opportunity,” said Andrew Grougrou, national sales manager for graphics markets at 3M Canada, referring to the unmarked trailers on Canadian highways. And, there are so many of them.

Other studies have also pointed out that using vehicles as mobile billboards offer a better return on investment than other methods of advertising.

Grougrou spoke to Truck News on the sidelines of the Private Motor Truck Council of Canada’s annual conference in Niagara Falls, Ont., in June.

At the event, 3M was the sponsor of the Vehicle Graphics Design Awards, which have been honoring designers excelling in the production of truck graphics for more than 30 years. The number of entries for the 2019 awards exceeded expectations, the organizers said. 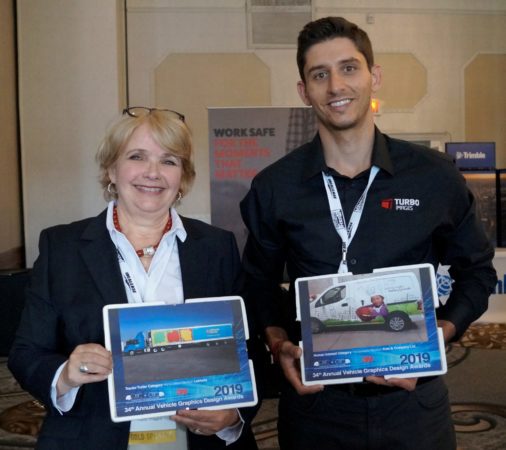 “We were thrilled with Turbo’s success this year,” said Shelagh Morrison, executive director of business development and marketing. “The awards are selected by a blind panel of industry professionals. It really validates our work.”

Turbo uses 3M’s vinyl products to make graphics because the company provides what is known as the Match Component System Warranty, the most comprehensive in the industry, said Morrison.

Vehicle graphics are created for a variety of reasons, she said. 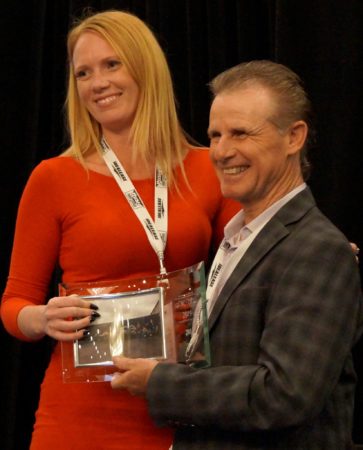 Jessica Griffiths of Motive Media receives an award from Glenn Pattison of 3M.

Motive Media won in the Tractor-Trailer, Straight Truck and Light Truck categories. The company has been involved in several recent high-profile projects, such as Raptors branding, which included 19 parade vehicles, one trailer and one retro TTC bus.

“Fleet branding can have a huge impact on your business because not only are you moving the goods, you are promoting your brand, your company and your message in a huge way,” said Kathy Cartan, president.

“It provides an opportunity to build business and brand awareness from coast to coast at a minimal cost per impression.”

The company was also behind the specially-wrapped Cervus Peterbilt tractor at the recent Ladies’ Lunch hosted by the Toronto Transportation Club. It featured celebrity speaker Rachel David, who delivered the keynote address at the event. 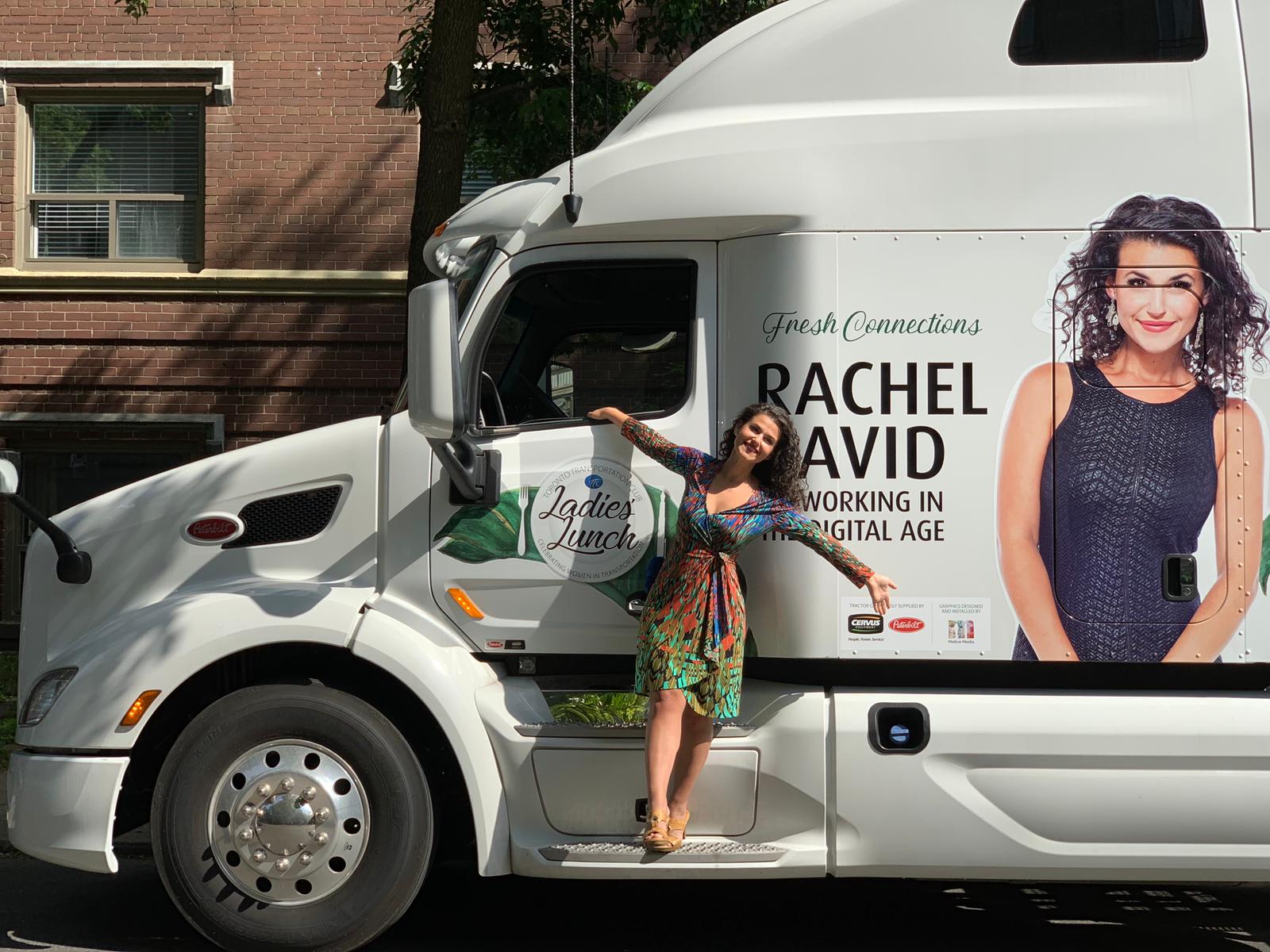 Rachel David on a tractor promoting her speech at the TTC Ladies’ Lunch.

“It was the perfect opportunity to promote the event and Rachel in a big way in a big city, with big traffic,” Cartan said.

Rosenau Transport was the winner in the Human Interest category. The Alberta company wrapped one of its tractor-trailers in support of the Plaid for Dad campaign, which raises prostate cancer awareness among the trucking community.

Studies have suggested that truck drivers are particularly vulnerable to prostate cancer because of the body vibration they endure during longhaul trips.

“The president of our company approached us to come up with something that is cool and that would stand out to support Plaid for Dad,” said designer Trevor Adrian of Rosenau Transport, which has its own in-house graphics production team. “That truck is seen by thousands of people…most people really love the truck.”

The livery is in teal, which is also the company’s color.

It is not the first time one of Rosenau’s vehicles has drawn public admiration. Its Support Our Troops trailer, which paid tribute to Canadian soldiers, was a runaway success two years ago.
“Many troops contacted us saying, ‘We really appreciate what you guys have done,’” Adrian said.

One American company is offering a cheaper alternative to traditional truck wrapping, which on average costs about $4,000 per truck. 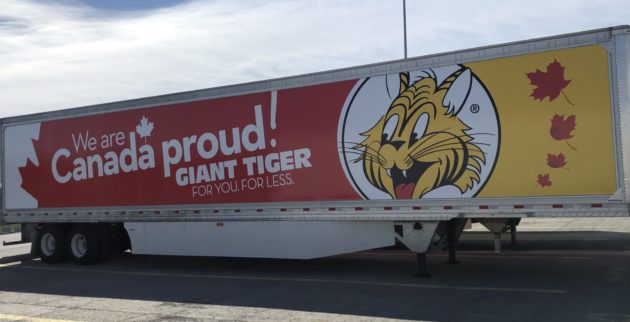 “While the initial cost of Kwik Zip could be higher, any extra money spent on it is compensated by the fact that the vehicle doesn’t lose any productive days for installation,” said David Falk, national account manager for Canada.

“There is only marginal cost and time involved in removing it (one hour of labor), but most importantly, it can be re-installed on a new piece of equipment.”

The industry is also witnessing the emergence of a niche green market, said Grougrou of 3M Canada.

“We have a line of green products that offers flexibility, and many, many companies are opting for that solution.”

Such sustainable products were first used by 3M during the 2010 Winter Olympics in Vancouver, he said.

“The industry itself has not taken off to the level where you could just apply graphics and then recycle it because there are a lot of components,” Grougrou said.

At the Vancouver Olympics, however, 3M was able to “repurpose” the products through a complicated process, thereby helping reduce the Game’s carbon footprint, he said.

Glenn Pattison, an account executive at 3M, said Canada Post is one of the company’s biggest green customers.

“We do all theirs with green products, all their delivery vehicles. They’re a real implementer of going green.”