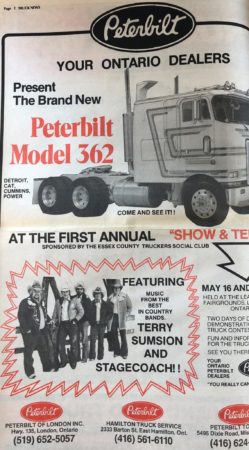 It was also a year when the North American truck market was suddenly flooded with a bunch of new rigs – among them the Ford LTL, the Peterbilt Model 362, Mack’s Mid-Liner and International’s luxury Eagle cabover.

So, all were featured in stories and advertisements in the inaugural edition of Truck News in May of that year.

Advertisements show competition was intense. One dealer offered trucks at “yesterday’s prices” while another said its rigs were “loaded to the nines.”

The Model 362 was the main attraction at the Show and Tell, organized by the Essex County Truckers Social Club in Leamington, Ont.

“Your Ontario dealers present the brand new Peterbilt Model 362. Come and see it,” said the full-page ad. Peterbilt later said the 362 helped increase the popularity of cabovers in the 1980s.

Competing with Peterbilt on another page was its sister company, Kenworth, promoting its latest models as a “great choice.” Both Peterbilt and Kenworth are owned by Paccar. 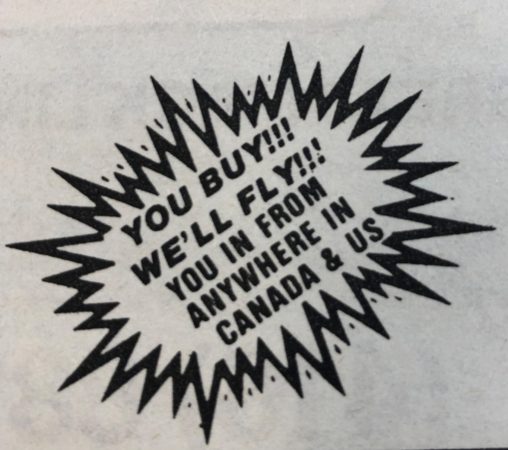 The magazine ran a story about the Ford LTL-9000, and quoted a Ford executive as saying that the truck was the “Lincoln” of the company’s lineup. “Already over 250 orders have been received,” Truck News reported.

Ford began producing the “Louisville Line” of trucks in Louisville, Ky., in 1969. The line was later sold to Freightliner. Ford exited the heavy-duty segment in 1996. Another major player of the time was GMC. An advertisement for the 1981 GMC General boasted, “It has everything and more.”

The ad by a dealership in Ottawa said the prices were “so low, we dare not print” them. It also offered to fly in customers from anywhere in Canada and the U.S. to the dealership with this promise: “You buy, we’ll fly.”

In 1987, General Motors ended the production of The General as well as The Brigadier Class 8 trucks. As for the all-new Eagle, Truck News reported it provided the roomiest cab ever produced by International.

A Toronto dealership offered Mack’s new Mid-Liner with this slogan, “There is a new bulldog in Ontario.” The truck made its Canadian debut in 1981, a year after its launch in the U.S. The Mid-Liner series, which was built under an agreement with Renault of France, included straight trucks and tractors in three models. 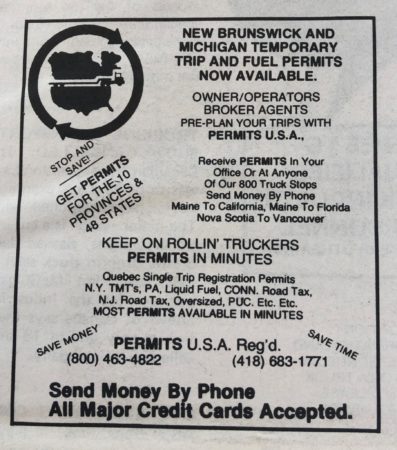 The advertisements, however, were not limited to new trucks. There were quite a few ads promoting used equipment. One company selling Utility trailers boasted that it had a “mountain of used trailers,” while another was so confident about its prices, it pleaded, “Give us an opportunity to under-bid any quote you may have.”

Another interesting ad was posted by a Quebec company, which offered to make trucking easier by doing all the paperwork for drivers.

And, Bette Davis Eyes is still adored after 38 years.