Bill Vezina never considered himself a computer or IT expert but he certainly has become one.

“The whole company is basically run on the Web. I never knew, until I started working here, how much I actually knew about computers.”

The “here” Vezina refers to is Bushell Transport Company Ltd., an Alberta-based heavy haul transport company that operates out of Acheson and St. Albert, where he is the director of safety and compliance. While Bushell may have celebrated its 50th anniversary in 2013, the company isn’t wedded to the way things used to be. Instead, under the leadership of Grant Glattacker, the son of founder Martin Glattacker, Bushell has turned to cloud-based computer programs to improve operating efficiencies.

“Grant is pretty smart when it comes to this computer stuff. He has visions about how he would like it to react to make his job and everybody’s easier,” said Vezina.

While the company had been making strides to incorporate new technologies, it wasn’t until Bushell moved into a new building in Acheson last August that the transformation could really begin. “At our other facility, we didn’t have the ability to do that because we didn’t have the office space, we didn’t have the resources to use the software to its full potential. We didn’t have a proper service bay. We weren’t set up as a proper maintenance and repair shop.”

Now Bushell has systems that handle parts inventory and ordering, work order creation and management, hours of service monitoring, and even fluid delivery and monitoring, and Vezina has a desktop computer system that day traders would find very familiar, just so he can monitor all of the applications.

“When we got the new facility, Grant had ordered new computers for everything. For my system here, we actually went with a little faster computer for my office because I’ve got three monitors. And probably could use a fourth.”

One of the biggest operational changes that came along with the move to the new building was installing a computerized fluid delivery system. Under the Graco Inc. Matrix system, the amount of oil or DEF each truck requires is specified on the work order. The maintenance mechanic enters a PIN and then sets the system to automatically dispense the indicated amount of fluid. Once that happens, an equivalent amount is depleted from Bushell’s inventory listing. While the system is working properly now, getting it set-up and running properly took over a month.

“It is controlled through transceivers and air pumps. And all the guns off the fluid tanks are radio controlled. So if you don’t have your settings right on the system portal, you’re not going to be able to deliver your fluid to the unit. Getting that all lined up and put in place is a chore in its own. For some reason, I couldn’t get the transceivers to read, I had the PAC (pump air control) reading, all the settings were correct, the guns were recognized, but I just could not get it to work,” said Vezina. A service technician finally managed to adjust the settings and get everything running properly.

“There are very few mistakes made anymore [when ordering parts]…Now I can go into ECAT and I know what unit is in the shop that needs this part, I drill into that unit, find the part we need, and the part number is there. There is no error.”

After finding the part number in ECAT, Vezina then turns to PACCAR’s CONNECT, a Web-based computerized maintenance management system (CMMS), which is linked with Bushell’s preferred parts supplier, Edmonton-based Stahl Peterbilt. Vezina enters the ECAT-provided part number into CONNECT “and as soon as you click that ‘ready for receiving’, it’s instant. The parts manager over there [Stahl] gets an e-mail. I get an e-mail. And my outside sales rep gets an e-mail saying this part has been ordered, and I can tie a note to that order, asking them to deliver that part ASAP or the next morning or whenever I choose. It’s very streamlined. Basically we’ve got the same resources at our fingertips here that there are when you walk into a dealer and go to the parts counter and say, ‘I need a compressor for this truck here.’ You are cutting out the middle-man,” said Vezina.

When asked to describe how much more efficient the parts ordering system has made the shop’s workflow, Vezina responded strongly.

“It’s like night and day. I don’t know about a number to put on it [how much quicker trucks are being repaired]. It’s probably an improvement of 75% to 80%—actually, probably at least 90%. It’s a big increase in productivity. Of course in the new facility, we have six work bays on the one side and one of those bays is a service bay, and our drivers, for the most part will let us know ahead of time when they’re on their way in.”

Besides handling one-off parts orders, CONNECT can be set up to automatically order inventory from PACCAR suppliers once stock numbers drop to a certain threshold. It also provides tools to help manage the costs associated with ordering parts.

“I can track what was bought where, when and how I paid for it. Then when I order it again when I need more, it will give me a price comparison, if there is a change in cost. I can print off reports, or the accountant can go into the portal itself and she can get reports. It will give a complete breakdown of what you spent, where and for whom, and how much.”

Since ECAT and CONNECT are proprietary, they don’t interface with other non-PACCAR systems, so while Bushell can place electronic orders with other parts suppliers, Vezina can’t do so through CONNECT. And although non-PACCAR items can be entered into Bushell’s CONNECT inventory system it’s a job that must be done manually. To facilitate that, Vezina said he created bar codes and part numbers for every piece of brass and fastener and air fitting that the shop uses, and as those sundries are added to or removed from inventory, their barcodes have to be scanned so CONNECT can register them.

The inability of CONNECT to speak to outside systems, and Matrix in particular, has also forced Bushell to adopt what amounts to a double bookkeeping system for tracking fluid use. If truck number 50, for example, requires 50L of fluid, that figure must be entered into both Matrix and Connect, if the inventory levels in both systems are going to match at the end of the day.

“So we have to manually make sure we keep the both up to snuff when we get deliveries,” said Vezina, adding that he is happy with the way Bushell is now able to track its stock.

“Our inventory tends to last a whole lot longer. Stuff isn’t just going missing, although I’m sure it still does on occasion.”

Along with inventory management, Bushell uses CONNECT as its work order and workflow system. Vezina can create and access work orders anywhere with an Internet connection, so if he’s at home and needs to amend one, he can, and the mechanics in the shop just need to refresh their computer screens to see any adjustments made to the work order.

Bushell’s employees log themselves in and out of the CONNECT system (by scanning an assigned barcode) at the start and end of the day, and during their lunch breaks, but aside from attaching themselves to each job they’re assigned, Vezina doesn’t use the system to monitor how they are spending their time since the company pays by the hour, not by piecework. 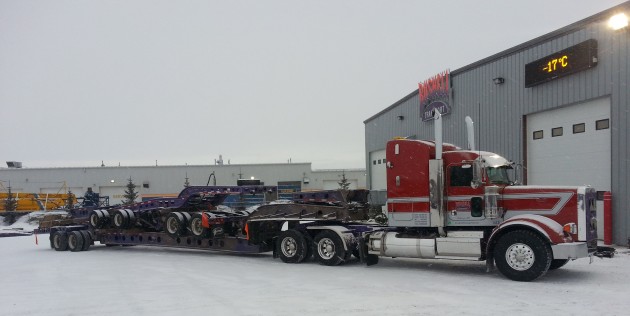 On the road software

Vezina also runs programs to give him a window into what Bushell’s drivers are experiencing behind the wheel.
There is one transportation management software (TMS) product offering in particular that keeps Bushell running.

“We use Sylectus, it’s a Web-based software that the whole company almost revolves on. It’s used for dispatching. It’s tied in with Shaw Tracking. And you’ve got Shaw Automated Hours of Service which is tied in with both of them, it’s EOBR. Everything it does ties into Sylectus,” said Vezina, adding that he also keeps J. J. Keller & Associates Inc.’s E-Log System open on one of his three monitors to so he can audit the logs to ensure HoS compliance.

There is one application Bushell purchased that may not be common in most trucking companies, and that’s an accident reconstruction system called Aras 360°. Noting it’s the “same software as the RCMP uses,” Vezina said Bushell has only had to use it once on a very minor single-vehicle collision, but Grant Glattacker prefers being prepared for all eventualities.

Keeping up and keeping online

While relying on cloud-based software does have some major advantages, including not having to host software on in-house servers, or not having to roll out software updates, there are disadvantage as well. Consideration must be given to network security. As well there must be plans put in place for what happens if the online systems go down or Internet connectivity fails, which has happened at Bushell.

“Once we had a bad windstorm here. Our Internet is off of a roof on the dish. The wind blew that over. I had nothing. I had no Internet. It was a terrible day. So yeah, I worry. I’m concerned that if we ever lose this, holy moly it’s going to be a very busy day at Bushell Transport,” said Veznia

He said the company takes network security seriously, has strong password policies in place and relies on security measure provided by Sylectus and Shaw.

Vezina knows that as the company grows, more Web-based software is likely going to be part of the future, and it’s a future Bushell is well prepared to handle.

“When the shop was built, they ran extra data cables because technology grows phenomenally every year, and Grant was advised ‘this is what it takes for data cables at this time.’ Well Grant took it upon himself to say, ‘let’s increase the data cables we are running because 10 years from now we’re going to be double.’ He pre-planned for the future to ensure we did have the data cables and the ability to accommodate any further technology that does come.” 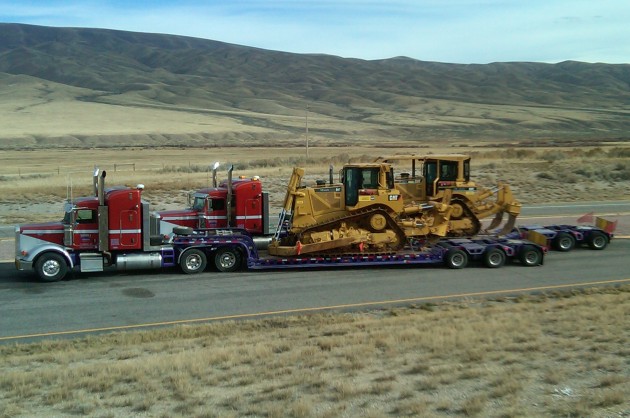