Even in the age of skyrocketing oil and gas production south of the border in 2015 and continuing its upward tick today, there is no shortage of alternative fuels available on the market. Liquefied natural gas (LNG), compressed natural gas (CNG), biodiesel, propane, and now, more than ever, electricity is getting some in the industry excited about the possibilities on the horizon.

Many of the possibilities alternative fuels offer have already come to fruition, with several fleets, especially in vocational applications, taking advantage of diesel substitutes. 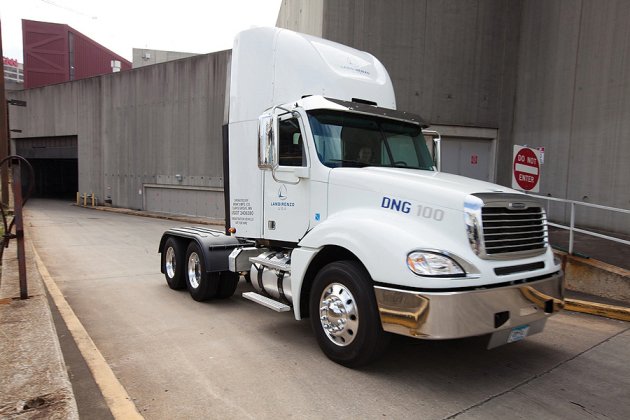 Many believe now is the time for alternative fuels to close the gap with diesel when it comes to powering trucks for certain applications, including last-mile delivery.

Michael Berube, director of the Vehicle Technologies Office, said 70% of the world’s petroleum is used for transportation, with 85% of that being on-road. Here are some alternative fuels being used today:

Biodiesel (renewable biodiesel)
New York City has been employing the use of alternative fuel vehicles for about 12 years now.

Biodiesel is derived from vegetable oil, recycled restaurant grease, or tallow. It is commercially sold as blends with diesel ranging from 5% to 100%. The city started using biodiesel in 2005 after a donation urged them to adopt the cleaner alternative fuel, and the move has been a positive one on several fronts.

“We’ve been paying dramatically less in fuel,” said Kerman, adding that maintenance costs have also been down compared to traditional diesel or gasoline engines.

The NYC Police Department operates the most alternative fuel vehicles of any agency in the city, with 1,833 hybrid units.

Kerman is equally excited about his fleet’s future use of renewable biodiesel, an endeavor the city plans to move forward with this year in a testing phase.

Natural gas
Dan Gage, president of NGVAmerica, said there are currently 165,000 units in the U.S. operating on natural gas, 48,500 of them being heavy-duty trucks. Gage said urban GHG emissions are the problem with diesel.

“It’s a simple truth, if we want cleaner air, we need cleaner trucks,” said Gage, adding that 74% of heavy-duty trucks are currently not certified to meet the latest NOx emission standards set out by the EPA. Gage believes natural gas is the way forward.

He said it is sustainable, responsible, provides lower fuel costs, and that the cleanest heavy-duty truck engines in the world are powered by natural gas. Natural gas comes in two forms – liquefied natural gas (LNG) and compressed natural gas (CNG).

Natural gas is produced as a fossil fuel or from landfill and water treatment plants. The U.S. is the largest producer of natural gas, and when it is derived from renewable sources like food waste, waste water, agriculture waste, and landfills, emissions are much lower. Cost is also a selling point for Gage.

“Even though diesel is a great price today,” he said, “over time there is price stability (with natural gas).”

Gage said many long- and short-haul fleets are slowly transitioning to natural gas, while other applications, like refuse and utility trucks, are around 60% natural gas.

Keshav Sondhi, director of fleet engineering and sustainability for PepsiCo, said 40% of his fleet is powered by natural gas, a shift away from diesel that began in 2011.

“The objective is to use as much of this type of fuel as we can,” said Sondhi, adding that natural gas reduces his company’s carbon footprint and helps with other operations at PepsiCo.

Even non-road applications such as marine and rail have been exploring the use of natural gas. B.C. Ferries, for example, has nearly completely switched its fleet over to the alternative fuel.

Propane
Propane is another viable alternative fuel that can be used as a power source, but has fallen a bit from the conversation with the rise in popularity of natural gas, and in particular, electricity.

Propane is a by-product of petroleum refining and is used in a liquefied form (LPG) and along with LNG offers the most range.

Tucker Perkins, president and CEO for the Propane Education and Research Council, addressed propane as an alternative fuel source during the Green Truck Summit a couple of years ago and said there were around 200,000 vehicles in the U.S. powered by propane.

When it comes to propane, the focus is usually on Class 7 and smaller vehicles, but there is growing activity with Class 8 with continuing research on propane-diesel blends.

About 70% of propane-fueled vehicles are in the aftermarket, with the remainder being OEMs. Light-duty vehicles made up 67% of new propane sales in 2015 and 33% came from medium- and heavy-duty. Propane is also becoming the dominant fuel source for school buses.

Electricity
Electric-powered vehicles (EVs) are certainly having their moment in the spotlight right now, and many in the industry believe that trend will continue. Battery electric vehicles for short range and urban operations are becoming more common. And continued work into range-extended electric vehicles (REEV) for longer haul applications is ongoing.

The cost to repair electric vehicles compared to diesel, Berube said, is lower.

“All the indications we have is that it’s pretty favorable for EVs,” he said.

Sondhi said PepsiCo made the move toward electric starting in 2010 with the deployment of 280 EVs.

“Finding the right technologies is great, but you must find the right way to monitor that technology,” Sondhi said.

Scott Phillippi, director of maintenance and engineering, international operations for UPS, said with all the buzz around electric, his company sees potential, but challenges, such as cost, weight, and range do exist.

Battery costs have come down significantly over the years, dropping 75% between 2008 and 2016.

But nothing on the market is perfect.

“If we wait for perfection it will never come,” said Phillippi. “You have to get on the train at some point.”

UPS has ordered 125 Tesla Semis and will test out the fully-electric truck once they are released.