Construction company not ‘Whisselling Dixie’ when it comes to moving freight 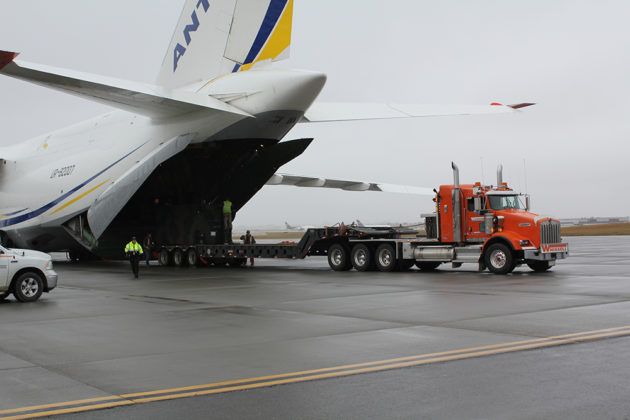 It’s hard to miss the type of freight Whissell hauls throughout Western Canada.

CALGARY, Alta. — Whissell Contracting doesn’t mess around when it comes to moving freight.

Since 1970, this civil construction company has been moving its own equipment and others’ through its trucking division, which specializes in heavy and oversized load transportation.

Whissell was one of the first companies in Alberta to purchase a 48-ft. wheel combination. But as transportation manager Tracy Chow explained, the trucking division had modest beginnings, starting with just a pair of gravel trucks.

It soon expanded when the company purchased trucks to haul equipment from one jobsite to another. And as the equipment got bigger, so did the trucks and trailers needed to move them.

“Whissell recognized very early that outsourcing was not the way to go,” Chow said of the company’s foresight into the most efficient and economical way to move its equipment.

The company was launched by Brian Whissell in Calgary as a water and sewer contractor with just a few pieces of equipment and a small staff.

Whissell and his brother were running a company in Edmonton at the time, when he decided to move to Calgary to start his own business.

Today, Whissell Contracting has five divisions, three offices in Alberta, and over 300 employees. With as many pieces of equipment as employees, Whissell now has several highway tractors and trailers, as well as heavy equipment.

In addition to heavy and oversized hauling, Whissell’s areas of expertise are far reaching, and include project management, road construction, river crossings, landfill services, and earthworks, to name a few.

On the heavy haul side of things, Whissell services such sectors as oil and gas, civil infrastructure, industrial mining and forestry equipment, emergency hauling, and most recently, renewable energy hauling, such as pieces for wind and solar.

To move these types of loads, it takes a special kind of driver with extensive training, something Whissell knows all too well.

Bringing its own inhouse training professional onboard, the company has made efforts to clear one of the hurdles of the heavy-haul industry.

“It takes a long time to train a person who comes into the field as a Class 1, five-axle guy who wants to be a heavy-hauler,” said Chow. “It takes a lot of time and effort for training to get them where they can haul 150,000 lb. piece of equipment.”

Working with the trainer, a full-time manager develops a training program for company employees. The two are responsible for ensuring everyone with Whissell has access to training material and that each operator is properly training on specific pieces of equipment.

“They are not allowed to operate that piece of equipment until they are trained and signed off,” said Chow. “We have one trainer for heavy equipment – on the civil side, we have a trainer, and we have one on the trucking side.”

Training can be quite extensive and lengthy. Even the trainer himself, who was hired as a Class 3 concrete truck driver, took 10 years to work his way up to become a heavy-haul driver. He is now qualified to operate every piece of equipment the company owns, including a 76-wheel 100-ton trailer.

Of course, some of the drivers Whissell hires have certain levels of experience already and training is not as extensive.

But the time and effort it takes to get drivers ready to get behind the wheel cannot be overstated.

“The challenge is, you hire these guys and bring them on, they work for a couple of years and then as soon as the oilfield picks up, there’s an exodus,” said Chow.

Adding to some of the business challenges for Whissell moving forward is an ever-increasing pool of competition.

When Chow started with Whissell in 2009, the company provided transportation services for much of its competition. Now, those competing companies have wised up and are doing the same thing as Whissell – hauling their own equipment.

Whissell has diversified to meet this new competition, hauling more specialized items, like those for the renewable energy sector.

It’s not every company that offers its drivers a chance to haul over 100 tons, and drive tandem and tri-drive tractors with trailers ranging from eight to 76-wheel combinations and eight to 10-axle configurations – all with inhouse training – throughout Western Canada and in extreme conditions in the Northwest Territories.