Engines, axles, and now automated transmissions – all built for the North American market under one roof. That’s the Detroit brand’s definition of a hat trick, and that was one of many hockey analogies made when Daimler Trucks North America inaugurated its Redford, Mich. plant last week to celebrate the start of production of the DT12 automated manual transmission in Michigan.

Till now, that hot-selling product has been built in Gagenau, Germany and shipped here for installation in Freightliner and Western Star trucks. Bringing production here was part of a previously announced strategy that will enable Daimler to ramp up production and also to streamline the flow of production for its fully integrated powertrain.

The celebration was a lot of fun to take in. About 2,000 plant workers gathered for the inauguration, which ended with dozens of hats being launched towards the stage to signify the Redford plant’s hat trick.

Roger Penske, former owner of Detroit Diesel, made an appearance as well as a few remarks to a grateful audience. Penske bought Detroit Diesel in 1988 when it had lost $600 million over the previous three years, was comprised of a disgruntled workforce and languished with about 3% market share. Around the time Penske arrived, so too did the Series 60 engine. One of the two – maybe both – saved the company and enabled a turnaround, which culminated with the sale of the company to Daimler.

The DT12 has been an enormous success for Daimler Trucks North America – akin to winning a Stanley Cup as an NHL expansion team. After my first drive with the DT12, I predicted demand for the transmission would explode right out of the gate, despite DTNA’s overly cautious expectations that it would sell somewhere in the neighbourhood of 6,000 units in its first year of availability. It far surpassed that and the transmission was effectively sold out for the year early in 2015.

Bringing production to Detroit – at a cost of about $100 million – will ensure a more ready supply is available in the future. 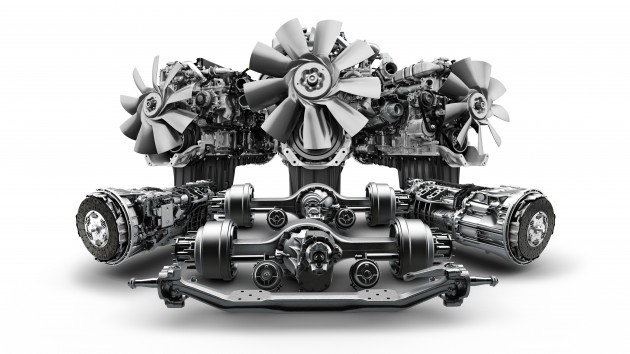