It’s somewhat ironic that in order to drive a truck that can drive itself, you need to earn a special certification along with your CDL. But having achieved my certification this week in Las Vegas, it’s clear the idea of the training is not to teach CDL holders how to drive an autonomous truck, but to ensure they fully understand how the system works and that their responsibilities are not in any way reduced when the truck is in autonomous driving mode. 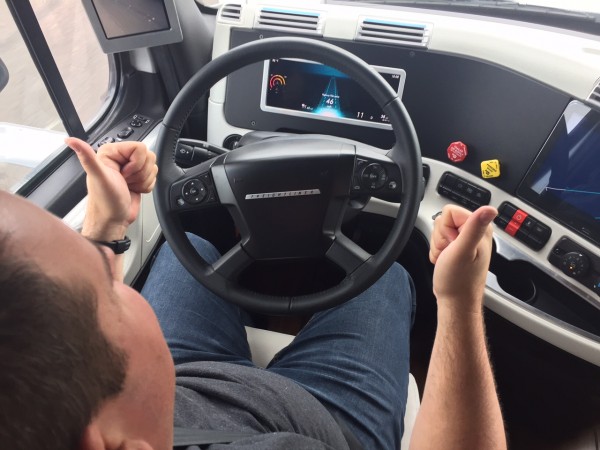 James Menzies removes his hands from the wheel while in Highway Pilot mode.

The certification process was developed by Daimler, maker of the Freightliner Inspiration Truck, and approved by the state of Nevada, where autonomous trucks are road-legal. Daimler is responsible for conducting the training and certification and I was among a handful of trucking journalists who this week became the first non-Daimler folks to become certified.

We drove the Inspiration Truck on about a 10-mile route and had to demonstrate an understanding of how the Highway Pilot system worked, including its limitations. Daimler engineers induced a failure to ensure we could quickly take over from Highway Pilot and safely bring the truck back under our own control.

The Highway Pilot system worked flawlessly. It was a perfect day to demonstrate its benefits, because the gusting crosswinds we were driving through can make driving tiring. Highway Pilot took control and was able handle the wind while I sat with my hands in my lap. Sometimes you don’t even realize how busy you are when driving in these conditions but sitting back and watching the steering wheel movements really emphasized this point.

So what’s next for the Inspiration Truck? Well, CNN and CBC were on their way to Las Vegas to file further reports on the truck. Afterwards, Daimler is talking about donating one of the trucks to a museum. These were built as concept demonstrators, not prototype trucks, so there’s not a lot left to do with these two trucks.

When Daimler is ready to commercialize or validate its system, it will likely install Highway Pilot in a production Freightliner Cascadia. So long, Inspiration Truck, it was good knowing you! Thanks for the ride! 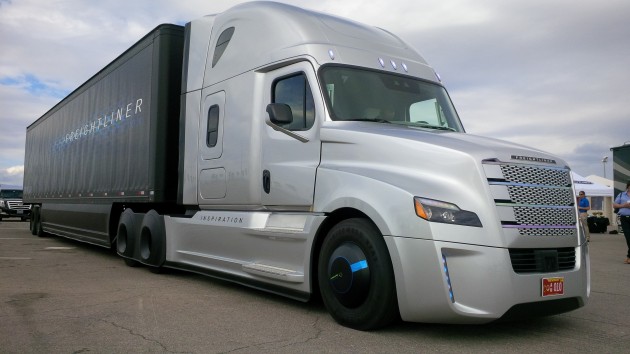