Earlier this month, I had the opportunity to visit Eaton’s Marshall Proving Grounds, where the company unveiled the industry’s first dual clutch transmission for the North American medium-duty truck market. As the name implies, the transmission utilizes two clutches and actuators, to provide more seamless powershifting, with no power interruption between shifts.

In this respect it performs similar to a torque converter-style automatic, but it maintains the relative design simplicity of an automated manual gearbox. And it’s loaded with features. I got to spend the entire afternoon driving a variety of trucks with the new Eaton Procision product as well as one with an Allison. In my report, I dubbed the Procision the Allison Assassin, because it performed favourably under a variety of conditions. (And yet I’ve never been offered a lucrative marketing gig – go figure)! 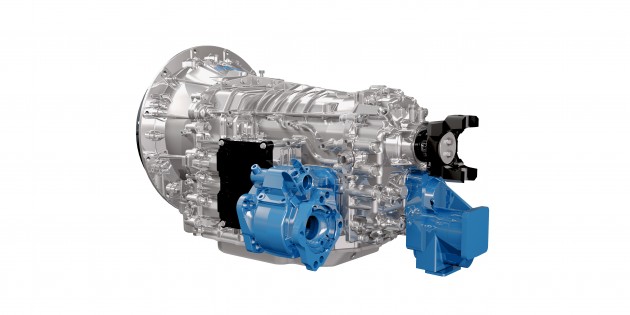 Seriously though, Procision is a pretty good name for this transmission, because its shifting is extremely precise and pretty much transparent to the driver. When the transmission is in gear, the second clutch pre-selects the next appropriate gear and the switch is made instantaneously. Then, the first clutch will pre-select the next gear and on it goes. The transmission can power-shift up and down through its seven gears.

Eaton’s expecting fuel savings of 8-10% compared to a torque converter auto, with even greater savings coming in applications with more frequent starts and stops and/or grades. Some of the niftiest features in the Procision include its creep and hill helper features. These provide the operator with greater control in low-speed maneuvering scenarios or when operating on a grade. Incredibly, the Procision can descend and ascend grades of up to 20% in a controlled manner, as demonstrated at the proving grounds.

One thing we couldn’t evaluate over a few hours at the proving grounds was the stated fuel savings. Those will be proven in the field by customers. If the savings do pan out as projected then it looks like Eaton could be poised to take a big bite out of the medium-duty market. And interestingly, officials told us this technology can be scaled up or down, so we may eventually see it brought to the Class 8 segment. You can read my full report here.