BLAINVILLE, Que. –Who would have guessed that catered shrimp costs no more than catered sandwiches? Or that side skirt and trailer tail vendors now face competition from a tidy aerodynamic package from Michelin that reminds me of a comment from a PIT Group (Performance Innovation Transport) staffer years ago about another product: “It’s so small, how could it possibly work?”

Yet there I was, nibbling shrimp under the tent by the Transport Canada test track in Blainville, Que., musing about how creative minds always figure out how to make big things smaller, and often just as effective. 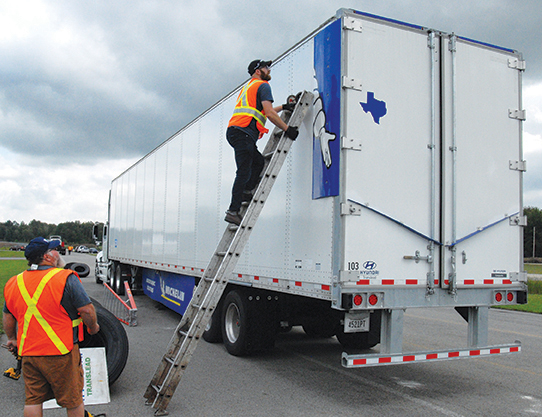 I swallowed the shrimp tale whole, but Michelin, looking for the special credibility that comes with positive PIT Group results, was taking no chances: It had hired PIT Group to evaluate an aerodynamic package it calls the Michelin Energy Guard Kit at the fall 2018 Energotest.

Michelin trucked up two trailers from South Carolina for the tests – one unadorned, the other outfitted with the Michelin Energy Guard Kit, for a side-by-side comparison. It consists of side skirts, perforated mud flaps, slim air foils (Michelin calls them fairings) on the sides and roof, at the back of the trailer, and an innocuous-looking V-shaped spoiler, as Michelin calls it, attached to the doors.

The air foils and spoiler are so slim that they would easily go unnoticed had they not been painted bright blue.

Michelin advertises a 7.4% fuel saving with the Energy Guard Kit.

Just how the whole package works is the usual aerodynamic mystery, Michelin’s bubble-filled animation notwithstanding, but those with knowledge of the fuel savings associated with side skirts, super singles, and boat tails, alone or in some combination, and their cost, now have another aerodynamic product to consider.

In other Energotest business, PIT Group did tests earlier this year to better understand the fuel savings gained with various vendors’ kits, including side skirts and boat tails, alone and in various combinations. While there is still much to do, and learn, about aerodynamic add-ons, fleets are again wringing their hands over the most basic, yet most baffling piece of gear: tires, according to Marc Trudeau, an industrial consultant and researcher with PIT Group.

There are more than 450 brands of 11R22.5 tires alone, Trudeau says. “How can anybody make sense of that? In some brands the differences can be minor, sometimes huge, but we don’t know. It’s almost impossible for fleets to know what to do.”

This fall, PIT Group worked to answer some questions, hoping to give its member fleets some clarity in their decision-making so they can focus on other worries.

“Everyone is busier than they have been in 40 years. What is smoke and mirrors?” Trudeau asks.

Of this fall’s Energotest trials, Trudeau says, “We tested regional and highway tires. We convinced manufacturers to bring their best sets of tires. Our members really wanted to know about the emerging market – Asian tires. The question for them is, ‘Is it worth it to retread, as opposed to buying a new tire?’ Is it better to leave on the truck an aggressive (winter) tire all the next summer, versus the cost and safety issues associated with changing tires twice a year? If a fleet decides to put one brand on for the whole year, how is an Asian tire performing on the fuel scale?”

While Energotest results are generally shared only with member fleets, Trudeau offers this glimpse into one of the things that PIT Group has learned: “If you can get a 5% fuel saving, you are still better off paying the full retail price for the better-performing tire than if you got the other tire for free. That was a real eye-opener for our members.”

They traveled to Montreal to discuss potential collaboration opportunities with PIT Group.

“We have identified a number of potential areas where we can collaborate. One possible area is emissions testing. We are both doing emissions testing. We both have outside facilities. PIT has the cold (weather) and we have the hot weather. Clients may want to test in Texas instead of Montreal (in winter), or in Montreal instead of Texas (in summer). We can therefore complement each other and extend the testing period,” Prozzi says. “We can also learn a lot from each other.”

The Texas A&M Transportation Institute has 700 staff. TTI’s research covers all modes of transportation – highway, air, water, rail, pipeline, and automated/connected vehicles. “I don’t think there is an aspect of transportation we don’t cover,” says Dr. Farzaneh. Prozzi adds, “We have invited the PIT Group to come and visit us, see our facilities.”

Around 2 p.m., Yves Provencher dropped in for a visit. Provencher left the organization this summer, 34 years after he joined FPInnovations, of which PIT Group is part. He was effectively the face and voice of PIT Group and the Energotest trials ever since they first hit the test track in Blainville in 2007 and showed how scientists could come to the rescue of fleets flailing in a sea of fuel savings claims.

Provencher is now senior director, business development with Saint-Jerome, Que.-based La Compagnie Electrique Lion, also known as the Lion Electric Co. A manufacturer of electric school and city buses, Lion will launch production of an electric Class 8 truck late this year or early in 2019. PIT Group had a hand in its development, having led a focus group composed of its members.