MONTREAL, Que. — Dozens are packed in laydown areas, a couple wait on a barge and a few sit high in the air atop pearly white Y-shaped pier caps. These and hundreds more box girders will soon draw a brilliant white line from shore to St. Lawrence River shore as the superstructure of the New Champlain Bridge.

The bridge will require 601 of them. One hundred and sixty more are forming the superstructure of the nearby Ile-des-Soeur Bridge. 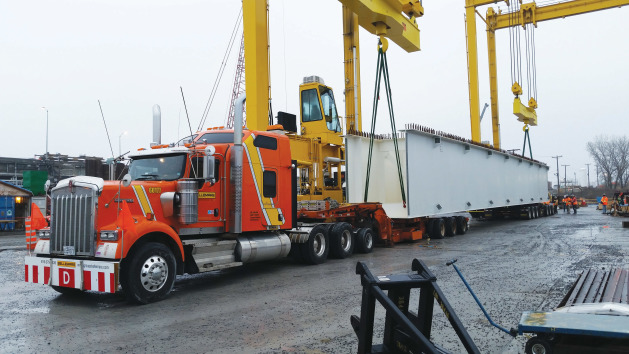 Groupe Bellemare has the contract to move around 500 of the beasts from where they are being fabricated to the New Champlain Bridge construction sites. They average 35 meters long, 3.5 meters high, and three to 4.5-meters wide. They weigh 50 to 80 metric tonnes apiece.

As far as weight goes, the box girders are nothing special to a heavy-haul specialist like Bellemare.

“But as far as quantity goes, it is major,” says Daniel Provost, transportation operations manager, Bellemare. And the sometimes double- and triple-handling of them makes the contract that much more challenging to execute.

Quebec City-based Canam Bridges is the contractor responsible for fabricating the box girders, but lots of finishing work is being done by two subcontractors: Marmen in Trois-Rivieres, and ADF in Terrebonne.

“Marmen has a plant to build them and another to paint them. A load could go from Canam to storage in the Port of Quebec. We could touch a girder three times,” Provost says. “We started hauling them in the second half of May 2016. We transferred some from Canam to Terrebonne for finishing. When Canam was too busy it sent some to Marmen and ADF for finishing. We started bringing them to the bridge in November, 2016. It’s a big challenge to think of moving them. When you think of moving one from Terrebonne to Brossard, it is a four-hour drive. You may have worked as much as two months preparing for that drive.”

Bellemare began planning the moves in April, 2016. One Bellemare staffer and one dispatcher are permanently assigned to the box girder moving contract. A steady stream of permit applications have been flowing to Transports Quebec (MTQ) for the routes and alternate routes: MTQ may demand last-minute route changes, and changes at road construction sites in The City of a Million Orange Traffic Cones (Montreal) can disrupt Bellemare’s carefully prepared plans. And then there are changes to the bridge construction schedule that add a little pepper to the game.

“We have an erection schedule that changes every day. We know where each piece is coming from and where it is going to. Say they need a place in July, and then there is a delay. We apply right away for a new permit. Some permits are good for a week, some for a month. You cannot get extensions. You have to re-apply. There is a lot of re-applying and re-applying,” Provost says.

Loaded on trailers, the tops of the girders are 4.62 meters off the ground. Bellemare always uses the same drivers.

“He knows where the loads go, where to turn, how to tie them down, they are trained to do it,” Provost says.

The typical load configuration, totaling 40 to 50 meters in length, is: tractor (four-axle) + three-axle jeep + six-axle steerable dolly; Bellemare has dedicated eight steerable dollies to the box girder contract. While one eagle-eyed writer saw some parked along the Autoroute 20, Provost says that most are moved on secondary roads where it is safer to poke along at 10 kilometers an hour over any bridges.

Bringing the girders to the laydown areas is not the end of the road for Bellemare. Using a kind of self-propelled trailer called interlines, manufactured by Goldhofer, Bellemare moves the girders for assembly into end-to-end sets of three that may weigh 390 tonnes, be 90 meters long, and 14 meters wide.

The interlines are like segments of a caterpillar (the wiggly kind, not the yellow diesel kind). They come in different lengths, or lines; ie., two-axle and four-axle, and can then be linked together to whatever weight-bearing capacity is required.

“We bought 24 new Goldhofer lines last year that turn 90 degrees. We bought four-axle blocks. Each line has its own diesel engine, operated by remote control. The newer ones we bought can synchronize two trailers,” Provost says.

The beauty of those turnable wheels is that the interlines don’t have to move in curved lines; for example, one could be driven around to spell the letter E with perfect 90-degree turns, or, say, a B.

Interlines are also being used in synchronized pairs – one under each end of bolted-together box girders – to reposition them to where giant cranes can hoist them up and onto the pier caps, and become part of the bridge.