MONTREAL, Que. — Lights-a-flashing, pilot cars, or simply pilots to some, do more than book-end oversize loads and herald their passage to lesser vehicles. They scout ahead for trouble, help with route planning, talk rig drivers through lane changes and tricky turns, run interference in heavy traffic, and sometimes even steer the boosters on long loads.

While the job description for a pilot might read like a search for a minor renaissance man/chief bottle washer – an Alberta ad for a pilot runs to 38 areas of responsibility, including collecting litter at job sites – at its core, the job, to distill the comments of some heavy-haul and pilot companies I contacted, requires an understanding of trucking and a mature commitment to doing good, helpful work. 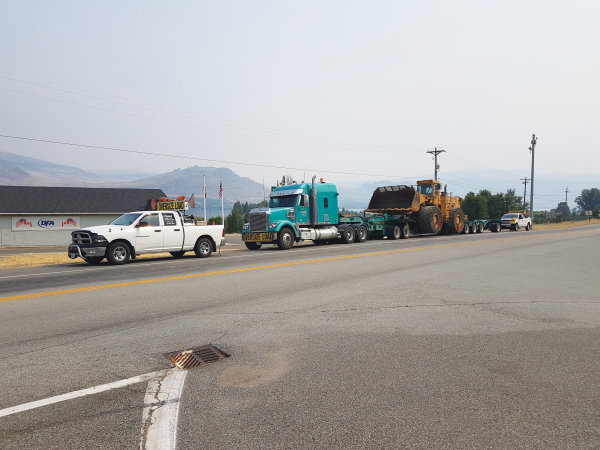 “It is really hard to do. It is underestimated,” says Renaud Labbé, health and safety coordinator with Trois-Rivières-based Transport Bellemare International.

“Pretty much I strictly look for people with a few years driving a pilot truck or at least driving a truck. If you find a guy who has done longhaul before, he is pretty well ready to go,” says Patrick Stewart, the owner of Open Road Pilot Car, in Brandon, Man.

“Depending on the type of load – 12’2” is not all that bad. You get into something 15-16 feet wide, you want (a pilot) with their smarts with you – know you can clear that pole, get around that corner,” says Peter Ross, a Nova Scotia-based customer concierge who does a variety of tasks, such as permitting, project supervision and pricing, with Acheson, Alta.-based T-Lane Nation. And for the longer loads, such as wind turbine blades, “You want pilot cars that know what they are doing,” he adds.

Kelly Ficociello has strong opinions about what constitutes a worthy pilot. She started out as a young trucker with her own rig, and now is the manager of MAK Transportation Services, in Kelowna, B.C., which she founded in 1994. Her crew of six drivers haul heavy loads throughout North America.

One of her favorite pilots is Steve Morrison, an owner-operator with Pennask Pilot Car in Westbank, B.C.; he and his wife are both pilots.

“Steve will help the driver. He will put out the driver’s flags and triangles, so my driver won’t have to. Steve finds roads for me. Steve will drive ahead to make sure we can get in and out. I can depend on my pilot car,” Ficociello says

On the other hand, she comments, “Other pilot cars won’t even offer. There are pilot cars who don’t know what they are doing.”

This may have something to do with certification requirements, which, while I did not poll every province, sound as though they may be non-existent in Canada.

Although the B.C. Ministry of Transportation and Infrastructure published Pilot Car Load Movement Guidelines, a primer of regulations and techniques, in November 2016, Ficociello says there is no certification for pilots in British Columbia.

“It’s like mad today. We have fired pilot cars halfway through a trip.”

Stewart notes, “In British Columbia you absolutely have to have a traffic control ticket to run in the province. Every driver has to take that course and every driver has to have all the signage in the back of his truck. That was a big thing last year. Not everyone was happy with that.”

Stewart sends his pilots to the U.S. to take the Washington State Department of Transportation Pilot/Escort Car Certification.

“I train my own drivers and have them take a Washington certificate course, even if my guys aren’t going to the U.S. In Canada, it is pretty much nothing. Companies take it upon themselves to train to certain safety standards. They have been talking about it for years and years. There are a few companies that have put together manuals and courses that they wanted to promote from coast to coast, and presented to governments, but there is nothing so far,” he says.

In the Atlantic Provinces, Ross notes, “There is no requirement yet. Most (pilots learn) from being around the business.”

Some come from the oil patch. In fact, Stewart notes, the oil patch is quite the incubator for female pilots.

“The business is very open to women. There are a lot of female pilots out there. Pretty much all the women I’ve worked with are trained from the beginning as pilots, and most come from the oil patch – shifting equipment around,” Stewart says.

The softening of the oil patch economy has forced more of its pilots out onto the open highway for work. However, says Stewart, “(This is) a totally different ball game than hauling oil rigs on back roads.”

While there are pilot car companies with lots of cars, Stewart notes that the majority are one-guy, one-truck operations.

“We have four guys spread out that we use on a regular basis in Manitoba, Saskatchewan, and Alberta. They have a community that they work in and they just come to wherever needs to be covered. Getting your foot in the door is hard for the (owner-operator). You have to make a good impression when you get your first job. Show up with clean equipment and everything working properly. I hire people with experience as a heavy-haul driver. If they have done that before, they know what to do,” Stewart explains.

“In Alberta there are so many pilots it’s unreal. They’re hurting. But they are a little thinner (on the ground) here in Manitoba. When it gets busy here or in Saskatchewan, it can get hard to find a pilot car.”

“Some companies hire people who just park in front or behind the load,” Stewart says. On the other end of the spectrum, he notes, “We work with companies in which safety is a huge priority, and are on the hunt for certification. Some have you sign a contract when you present your driver’s licence and certifications. Anything in the oil patch and mining is huge into safety.”

Companies may hire pilots even when, regulation-wise, a load does not require them.

“To me, the pilot car is there to protect my driver and the public. If I can get my guy through a congested area in a city, with the pilot car blocking, my driver and I will say, ‘You know what? This will make my life easier. Let’s bring the pilot,’” Ficociello says.

Speaking of making life easier for heavy-haul drivers, Stewart offers another example: “We get guys doing a straight shot from Mexico, with summer fuel in their tanks that freezes solid. We carry additives to put in their tanks.”

Perhaps hand-holding should be written into the job description.

“We got brought on a lot of projects that were quite the gong show – poorly planned and executed. You realize what is going on and you take it upon yourself to figure out what is going on – routing, permits, where to stop for the night,” Stewart says. “Route planning is something I stress the most. It impresses people. Highway pilots do lots of navigation. It is harder and harder to find pilots who know routes ahead of time and know where they are going.”

A quick internet search yields claims of pilot wages ranging from US$23,500 to $61,000, with a few top earners hitting $100,000. While Stewart made no salary confessions, he did say this: “I can offer a percentage or an hourly wage. Employees find it pretty funny when I hire them on. (I tell them) you have no schedule and drive for hours and hours at a time. I lay out everything that sucks beforehand, and if they like that…it takes a special breed.”